If you know any Chicagoans, you’ve probably heard them complaining about our recent weather. It’s not just been a long winter, which we’ve had before — it’s a weird one. For a day, we’ll think it’s spring — last week, temperatures climbed up to 70 degrees. And then it storms, or hails, or, like last night, it snows. There’s a certain terror to snow in April for a Chicago gardener — all those fragile little pink buds clinging tightly to the trees. If they freeze now, we won’t have peaches this summer. It makes you want to run around throwing blankets over the trees. 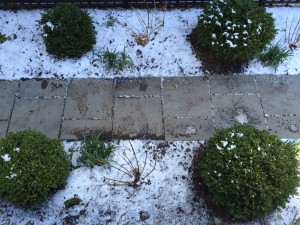 I’ve been pushing the temperature bounds in my garden since I started. Safe planting date (after the danger of frost has completely passed) in Chicago is mid-May, which is actually an improvement from the bad old days, when it was the end of May. We’ve also shifted a zone, from 5b to 6a. That’s climate change — terrible for the world overall, but with some pleasant side effects for Chicago gardener. Regardless of the date, I can never wait as long as we’re supposed to, so I start planting as soon as the ground is soft enough to work, and then I cross my fingers and hope that we don’t get a hard frost. 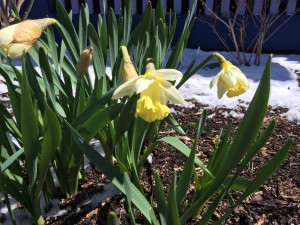 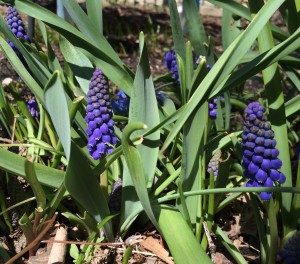 Last night’s snow wasn’t too bad, thankfully. The daffodils came through unscathed, as did all the little bulbs, including the muscari that just pushed their way up. The buds on the trees are fine; the redbud is going to burst out into bloom any minute now. The only flowers that seem to have suffered are my hyacinths — many of them went prostrate with the weight of snow, and are only slowly recovering in the warmth of the sun. A few snapped their thick watery stems, and I’ve gathered them up and brought them in to stick in a glass — they’ll scent my kitchen for the next few days. 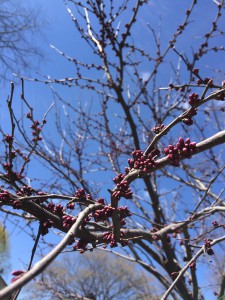 There’s only so much a gardener can do, against the big actions of nature. Tend to the little flowers, brace and mulch what you can, don’t plant *too* early, or you’ll pay the price. Nature can be coaxed along, but if you try to stand firm against her, she’ll bowl you over. 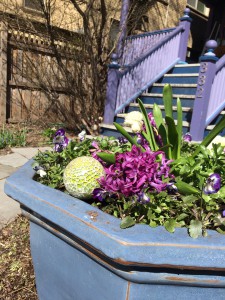 As for the big changes — well, I might enjoy a little extra warmth in Chicago, and my garden does too, but enough is enough. The careful gardener recycles her plastics (and tries not to buy too many of them to begin with), goes organic with the fertilizer, plants plenty of natives, and votes for representatives who actually pay attention to what we’re doing to the planet.  I think we’re getting close to the limits of what she can take.