Facebook Instagram Youtube Twitter Patreon Shopping-bag
Menu
Cancer log 153: I promised that I would tell you guys about the Victoria's Secret trip, post-lumpectomy. It was weird, people. So as context, I'll note that I developed breasts at age 9, and they were large, DD. This was not a blessing, esp. on a five foot tall frame. You can imagine my misery, in my Catholic school uniform with its gaping buttons. I thought about a reduction for a long time, but I wanted to have kids and have the option of breastfeeding, so I waited. And I'm not sorry I waited, but after I'd had my kids (whom I ended up pumping exclusively for because neither would nurse, but that's another story), I practically skipped my way to the plastic surgeon's office for a reduction.

By that point, my breasts had grown and shrunk and grown and shrunk a few times through pregnancies, and were somewhere in the F range and I was living with constant back pain. Had the surgery, recovered in a few weeks, back pain went away, like MAGIC. (That was 2011 -- back pain is still gone, five years later.) My only regret was that the surgeon wasn't willing to go all the way down to a B, so I settled for reducing to a C. (He had some arguments about it not being medically wise to take away that much at once, but later conversations with others, including other doctors, indicate that it was more likely that he was used to shaping a C cup, and was both uncertain of his ability to do a good job with a B, and was worried that I would complain afterwards that they were too small. If I'd realized that, I would've pushed harder for the B. Oh well.)

Fast forward to 2015 and breast cancer diagnosis, and yes, I will always wonder -- if we'd taken out more at the reduction, might we have caught the bit with the cancer too? I'll never know the answer to that question.

I did five months of chemo first, which shrank the tumor significantly, so that in the end, they were able to do a lumpectomy rather than a mastectomy. So if you look at my breast, the upper half looks normal, but the lower inner quadrant is mostly scooped out, and there's a big puckered scar. If I wear a lined bra (or a compressing sports bra), it's entirely unnoticeable under clothes. Without a bra, you might notice, if you were staring at my chest.

So I needed a couple of new bras, in part because they'd also taken out some lymph nodes under my arm (diagnostic), and the underwire in my bras was poking that tender area very uncomfortably. (It was worst at the tail end of radiation, actually, when that area essentially sunburned and then the skin peeled.) I went bra-less when I could, but I was still teaching, so that wasn't always an option. And I was at the mall, and they had a Victoria's Secret, so I went in.

People. That place. I think I hadn't been in one in a decade or so. Their bras aren't cheap, and I've mostly been picking up bras at Target since the reduction, since it had gotten much easier to find bras that fit me and supported sufficiently. VS has really changed their set-up. Now you walk in, and one of their fit people accosts you, and takes you into the back, where the walls are lined with dark pink cushioned fabric, so it's almost as if you're inside a giant vulva -- I'm sorry, but seriously, that's what it looks like. And then they fit you, and they have a sample of all their bras in back, so you tell them what styles you're interested in, and they bring you the different styles in your size to try. And once you've finalized fit and style, you can go out and pick the colors you want. It's all very regimented, and they get a little distressed if you try to vary from their script.

It felt weird, being in that place that seemed so clearly designed to help your breasts conform to a certain aesthetic (perky, cleavage-y, well-supported, etc.). I felt like I was failing at feminity, with my scarred, quarter-gone breast.

In the end, I bought two bras, and I like them well enough, though I'm not sure it was worth going through the gauntlet. Amusingly, they asked what size I thought I was, and I told them, and they looked at me and said they thought I was wrong, and then they measured me and were surprised to find I was right. Hah!

I'm not sure I would have even gotten around to writing all this up, because it all felt a little distasteful and sad-making, but yesterday I stopped into Jayne, which is a cute little store down the street, and they had just gotten in these lovely little bralettes, I think they're called. And I'd never owned such a thing, because even after the reduction, I was in the habit of buying the sturdy, heavy-duty bras. But I don't actually need those anymore, and this was so charming, in pink and gray lace, so I tried it on, and the sales folk and I agreed that it was so pretty that it'd be a shame to cover it up, and didn't it look great paired with the lace tank top I happened to be wearing that day? 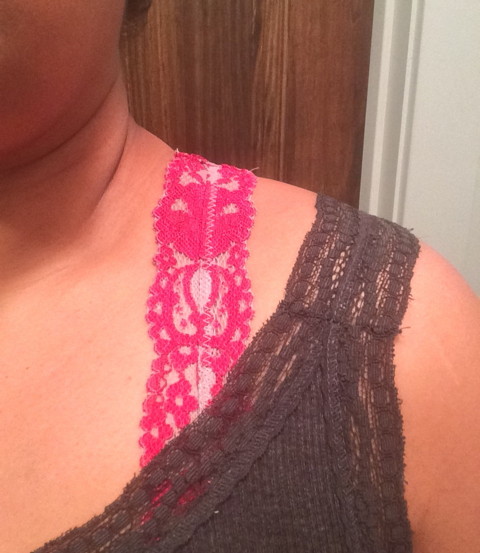 So in conclusion, if you find a bra that makes you feel pretty, you should buy it, and be damned to what Victoria's Secret thinks your breasts are supposed to look like. The end.

(Note: If you're wondering what happened to log 152, it was all about my hair, and I am feeling lazy about editing and posting several photos here. But if you want to read that post with its pictures, you can find it on Facebook here.)