Facebook Instagram Youtube Twitter Patreon Shopping-bag
Menu
Cancer log 133: The start of radiation, which is supposed to reduce the chance of cancer recurrence by about half. So yesterday I went in for my radiation set-up appointment. I wasn't particularly worried about it, and the whole thing went smoothly (and took about an hour). They had me take off my top and bra, leaving on bottom half clothes and even shoes. Then there was an interesting bit, where I lay down on the table with my arms above my head, and they created a warm mold around my upper body, to help me keep in the same position for future visits. Warm was nice; it's a shame it won't stay that way. :-) 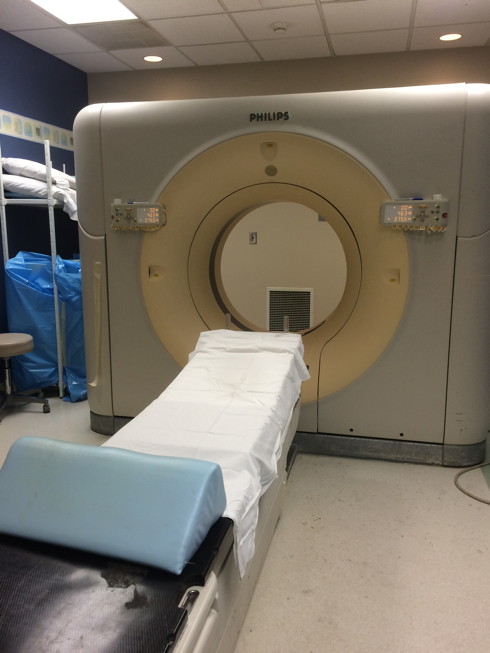 Then they applied a bunch of long stickers to my left breast (which they called wires, because they have metal wires in them, I think, but no need to be worried, because there is no poking here), outlining the shape. That took a little while -- the resident did it, and then the attending came over and re-did it all to his satisfaction. Got to love a teaching hospital.

(I actually do love a teaching hospital -- so far at Loyola, I've felt very confident that when they had a student working on me, the student was extremely well-supervised and wasn't doing anything they weren't capable of doing. And I find it comforting, somehow, being part of teaching the next generation of doctors.)

The next part was the actual radiation -- they coached me through practices at holding my breath for about 15-20 seconds, which you do because it moves the area they're irradiating away from your heart, making it less likely that your heart takes any damage from the very localized radiation. After a few practices, they slid me through the machine, which was kind of fun -- there's a green light that spins around the circle as you're going through, and a very Star Trek kind of machine noise; it all feels quite futuristic.

That was almost the end of it. They did have to give me three tiny blue dot tattooes before they let me go; it basically felt like three quick, sharp pinches. No big deal. I very much appreciate the techs being fast and efficient -- they didn't really give me time to get nervous about it. Boom, boom, boom, done. (As a side note, both radiation therapists say they really like their job, and think it's much easier work than being a floor nurse (far less dealing with bodily fluids), and would recommend the position to any of my students thinking about future careers. I think you only need a B.A. to do it, though you do need to follow a particular accredited program while you're in college.)

And that was it. In about a week, they say they'll call me to schedule the appointments; the Monday ones will be 30-45 minutes, since I meet with the doctor on those days -- the Tues - Fri ones will be 15 minutes, and they say they're pretty good at getting us in and out quickly and on time (esp. if you have a morning appt., as I do). So far, so good. Onwards!