Facebook Instagram Youtube Twitter Patreon Shopping-bag
Menu
Cancer log 108: Anand has been begging to go to the beach all summer, and I finally caved. I realized that today is likely to be the day I feel the best -- right after chemo infusion; the effects will get worse over the next few days, probably hitting their nadir around Sunday. And I'm on steroids today through Saturday morning, which give me extra energy (and appetite). So I thought about it, decided it was probably do-able, and that if it went badly and I ended up throwing up or something, it wouldn't be the end of the world, so I told the kids we were going to the beach. At which they promptly almost exploded with excitement. Poor things -- it's been a quiet summer for them, with more preschool and camp (increasingly boring) than they would have liked. Ah well.

As it turned out, the 45 minutes drive over and the hour drive back were the worst parts, and more for boredom than anything else. Once I got there, it was a little challenging carrying two heavy bags (cooler and beach bag) across the park, beach, down to the water's edge -- but it was totally do-able. Before anyone frets, yes, I doused both kids and the top of my newly-bald head in sunscreen. I also wore my new hat (picked up yesterday), which I love -- it's a) cute, and b) has a bit of velcro on the back (under the ribbon), which let me tighten enough so that even with a bald head, it didn't fly off in the strong breeze. Beautifully designed. 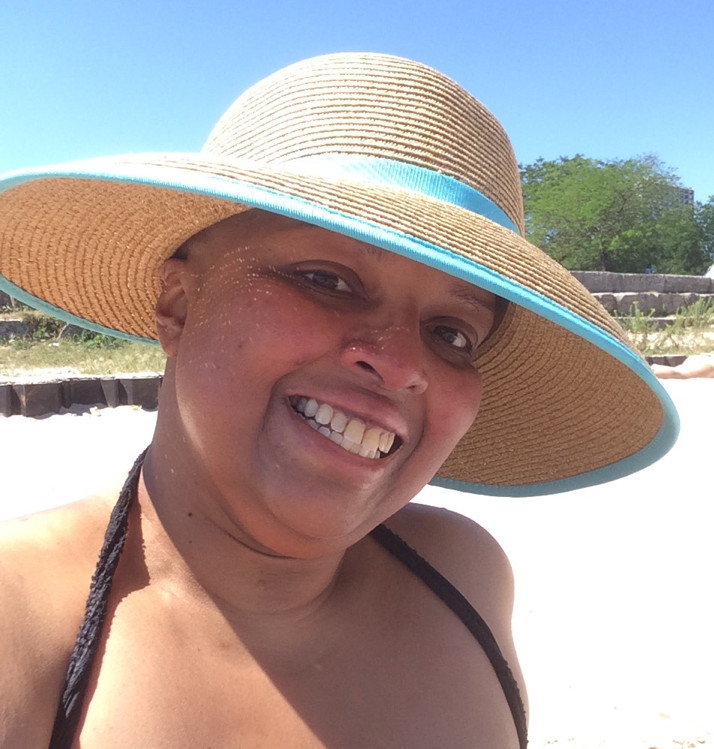 I admit, I was feeling more than a bit self-conscious. Slightly about being bald, although actually, I'm already fairly used to that, and don't think about it much. More about the big triangular plastic auto-injector that's attached to the back of my arm (it comes off this evening) -- it definitely feels like a big marker shouting, "She's sick!" in case you didn't get that from the bald. And a bit about the scar on my chest (right below what's visible in the hat photo below) from the port insertion. On the plus side, all that meant I felt less self-conscious about my round momma-belly, etc. than I normally would, so small blessings, I suppose. And as it turned nobody stared or commented, nobody cared. No one cares, people. They are too busy stressing about their own self-consciousness, and/or yelling at their kids to be careful, and/or just enjoying themselves. As long as you don't kick sand onto their towel, they won't think twice about you.

Once we set up, Foster Street beach wasn't very crowded at all, so we found a spot (around 10:30) right by the water's edge, which was perfect, since I could lie down as much as I wanted and still keep an eye on them when they were in the water. It would have been more challenging even last year -- at almost-6 and 8, they're old enough and responsible enough that they actually listen when I ask them to do things. So if I ask them to stay on the sand for a while and play, they'll do that. And if I ask them to only go into the water up to their knees (and there's a good long stretch of it being just that), they'll do that too. Did a ton to alleviate mommy anxiety; I did bring a book with me, but I didn't feel comfortable reading it. Kavya passed her deep water test at the pool yesterday (yay!), and can basically dog paddle, but Anand doesn't know how to swim at all, so anxious mommy must keep an eye on him at all times in the water.

But that said, I didn't mind watching them for three solid hours. They were super-cute and so happy. It was gorgeous out there -- it's bakingly hot in Oak Park, but it was around 80 by the lakeshore, with a strong breeze blowing the entire time, and the water was cold, but not too cold, so it was easy to go in anytime you started to get hot, and the sun and water and sand were just a tonic, as they used to say. If we lived closer, I'd try to get out there to 'take the waters' much more often I think. As it is, I've promised the kids that we're going to try to go out again in two weeks (right after the next chemo) if mommy is feeling up to it. Jed will be visiting then, and he likes sunshine, so I'll probably have another adult to keep an eye on them. I might even read a bit!

In sum, really glad I went. To the extent I can, I do think getting out and getting a bit of exercise (per doctor recommendation) is good for me, and actually helps my body tolerate the chemo better, helps me feel healthier overall. Many kid photos and kid notes in the next post. Thanks to Kavya for these photos! :-) 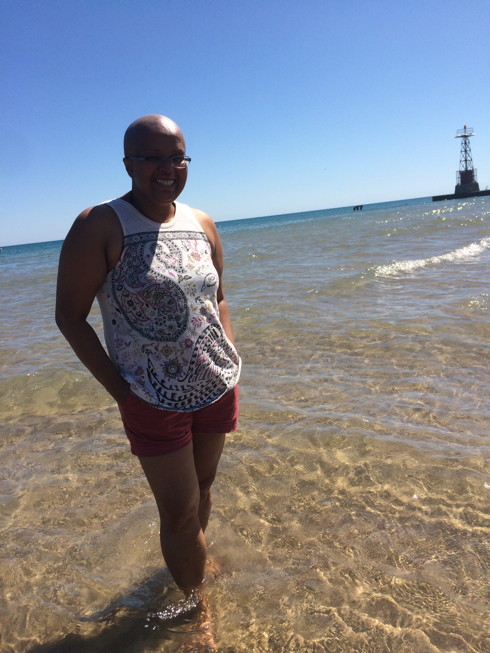