Facebook Instagram Youtube Twitter Patreon Shopping-bag
Menu
Cancer log 57: Port placement. So, everyone with any experience swore to me that getting a port would make the next several months immeasurably easier. A port is a small disc that sits just under the skin, right below my right collarbone in this case. A soft, thin catheter tube connects the port to a large vein, and my chemotherapy medicines are given through a special needle that fits into the port. You also can have blood drawn through the port. So port = far fewer needle sticks. I have already been stuck enough times in this process that the process of getting fewer sticks was immensely appealing. So I agreed to go in for this minor outpatient procedure.

I was anxious despite it being minor, and had Kevin come with me. You don't need to have someone with you for the procedure, but you do need someone to drive you home. He couldn't do much, but it was nice to have him to hand-hold while waiting for things to start and during recovery.

Then it was undress from the waist up and change into a robe, lie down in a room with big science fictional-looking machines, warm blankets (take the warm blankets if offered, or ask for them, as they are comforting!), a quick needle stick for the IV, then the doctor explains the procedure, which will involve what he called 'twilight sedation' -- it makes you calmer and a bit sleepy but doesn't actually knock you out (but this is why you can't drive for 24 hours afterwards; it's not legal because you're considered impaired).

Then tiny lidocaine anesthetic needle prick + brief burning (which I am getting very used to at this point, though I can't call it fun) at neck and under the collarbone. And after that, the actual procedure, which just feels like weird pressure -- literally like he's shoving something around on / in your skin, and then presumably sewing you up again (he was discussing it in detail with the nurse, who I think may be considering becoming a doctor, given their conversation), for about half an hour. Then wheel to recovery, remove IV. They apologetically drew blood from me with another needle stick, which is not typical -- I think the doc managed to prick himself accidentally during the procedure, and so they needed to check to make sure I wasn't carrying anything that would put him in danger. (Pretty sure I'm not!) Dress and go home, about 3.5 hours, start to finish.

I started feeling sore not long after, took some Advil, sent Kevin out to get me lunch, and after eating it and drinking tea, went upstairs to watch tv. I fell asleep about an hour into some sit-coms, and slept for an hour very solidly. Still a bit drowsy; I guess there'll be sedative in my system for a while. Kevin is making me rice and vindaloo for dinner, and I am going to stay tucked up in my bed and let him deal with the kids and everything. They can come play video games in here if they like. 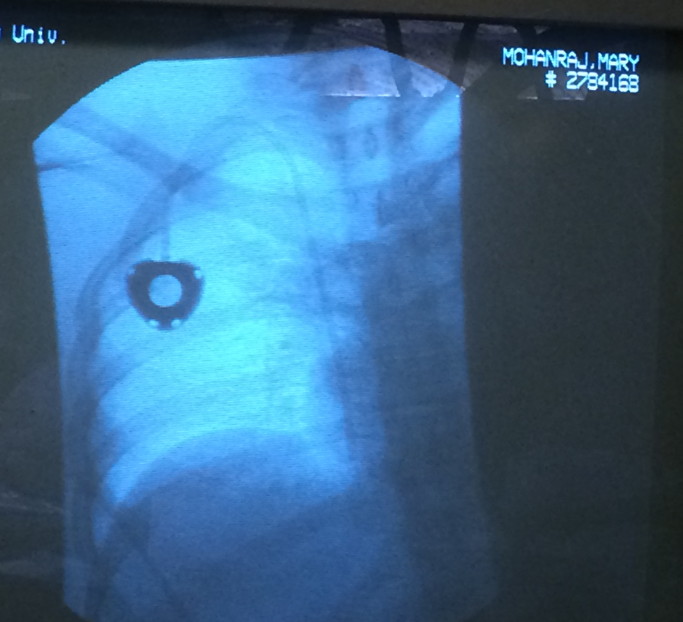 I really love the x-ray (that was the big machine) of my chest, showing the placement of the port. How cool is that? I wouldn't bother with the photo of the dressing (which will be changed to a less huge dressing shortly), except to note that it did kind of freak Kavi out when she came home, and we had a slightly longer conversation than previous about all this. 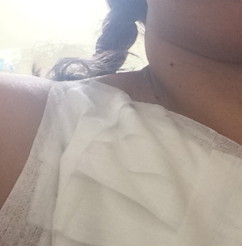 She asked if I was going to be going to the doctor a lot, and I said yes, and she asked what disease I had, and I said it was called cancer, and asked if she'd heard of it. And she said yes, and that didn't some people die from cancer? And I said yes, but I wasn't going to, so she shouldn't worry. There is, of course, a chance that I will, but it's a) not likely at all, and b) not going to happen anytime soon, so we can cross that bridge if circumstances change.

I asked if she was worried, and she said yes, and I told her not to worry, and then I tapped the dressing a few times to show that it wasn't a big deal, and she asked if she could, and I said sure, and she tapped it very gently and grinned, and then told me all about her field trip to the Museum of Science and Industry today, which involved driving past a lot of graffiti'd houses, so then we talked about graffiti for a while and looked at lots of pictures of street art online, and then she went off to do her homework, so I think we're okay there.

And that's that. Today's socks -- constellations. In high school, I loved this quote: "When you reach for the stars you may not quite get one, but you won't come up with a handful of mud either." -- Leo Burnett 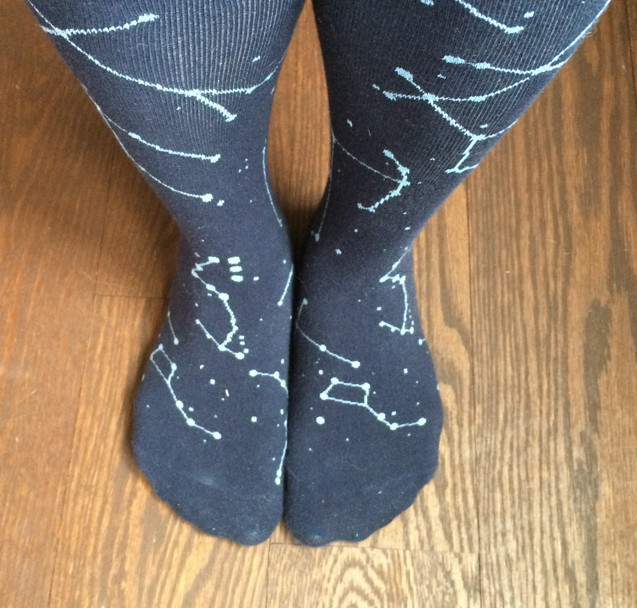