Facebook Instagram Youtube Twitter Patreon Shopping-bag
Menu
Cancer log 54: Featuring me in a paper gown (usually the breast cancer ones are pink cloth, but the EKG was paper) + the least sexy photo of my breast ever. (Not that there are actually that many photos of my breast extant, but whatever...) Brief recap of today's procedures. First, the clinical trials nurse met me, carrying a large cooler labeled biohazard. That was slightly unnerving. She shadowed me through the morning's procedures, because she needed to confirm they got the blood and urine samples, plus the right material for biopsy, then she needed to prep it for shipping, and send it all off ASAP -- they should have it in California by 8:30 a.m. tomorrow morning, at which point the two-week clock starts on waiting to hear if I'm in the clinical trial or not. 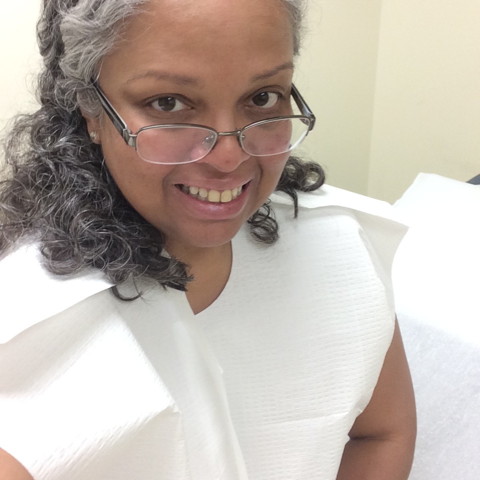 The blood draw was uneventful (though they did take a *lot* of blood -- several additional vials along with the three for the trial, don't ask me why...), and the EKG was easy-peasy. Lie down, attach the leads, wait a minute, get up again. Then the biopsy, which I have to admit, did hurt. There was the initial stinging/burn with the narrow needle went in with the anesthetic, not bad, much as I remembered from the previous three biopsies (two left, one right). Then they inserted the spinning needle-thing, and this part was fine, fine, fine, until ow! I jumped a little, in part because I wasn't expecting it, and in part because it was a definite jab. Apparently, I'm starting to build up some scar tissue from all these biopsies, and it takes a little force to get through it, joy. 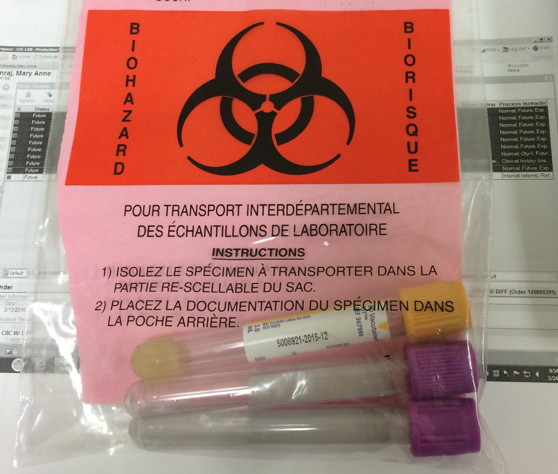 They used the spinning tool to scrape samples -- six of them, and this definitely felt different from the previous biopsies; I could feel / hear the whirring of the tool in my teeth, it seemed like. But that didn't actually hurt -- just weird + pressure. When they removed it, the nurse got busy prepping her samples (yes, I know it's a little gross, sorry, but I admit, I think it's sort of fascinating to see my tissue there, all full of cancer). Then they took me to the mammogram (not v. squishy, thankfully), to make sure the clip was still in place, to tell them where the cancer is. Right now, if I lie down, I can definitely feel the mass (it's much less clear if I'm standing up), but hopefully the chemo will shrink it down to nothing, so they need the marker clip to be sure they're poking at the right spot when they go in to do the surgery. 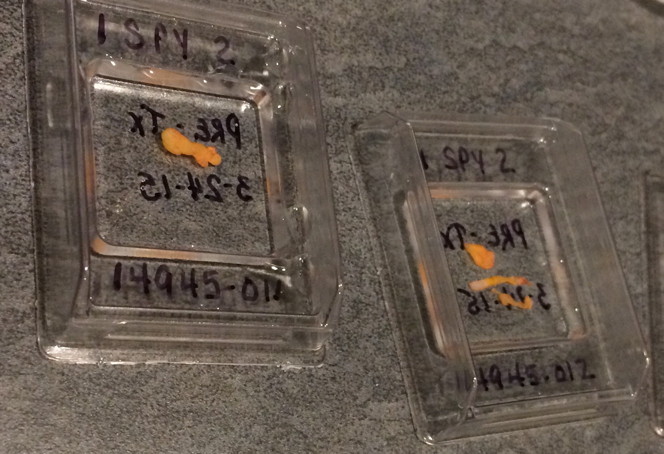 This biopsy involves suction, so there was a chance the clip would have been sucked right out (in which case, they'd need to puncture me again to insert a new one). Thankfully, it was still there -- and in fact, there were three clips -- two from the breast cancer biopsies previous, and one (that sharp bright little line you can see up top) that's a different shape, left over from the reduction I had in 2011. My breasts are filling up with bits of titanium. 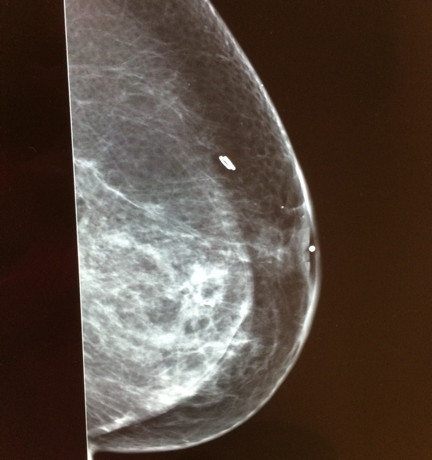 That was it -- I was really regretting that I'd forgotten to take some Advil, because by the time I got to the car, I was pretty achey. But now I've had some, also some consolatory sushi, and Kevin made me tea, and even though I'm not actually in pain at the moment, I'm feeling sorry enough for myself that I'm going to take to my bed with knitting and a show for an hour. Also an icepack. After that, I really ought to do some urgent work, but first -- breathe a little. Tomorrow, echocardiogram and chemo class. One consolation is that this week is spring break, so at least I'm not trying to juggle teaching with all these procedures. That's something.