When I was first diagnosed, one of the things that I was angriest about was the timing of it. We were finally happy, after a long, muddled road. Kev and I had had a rocky time of it for years and years  loving each throughout, but wanting different things out of life and not sure how to reconcile those, or if it would ever be possible to.

There were other poly relationships for both of us, some of which lasted, many of which didnt. Some of those were (and are) important. But mostly, Kev and I kept choosing each other for living together, for the long haul, or trying to. We broke up over and over  the last time, for almost a year. He left me in grad school in Utah and moved to Chicago, and I miserably tried to get over him. And even when we found each other again, it was almost in spite of ourselves  we still hadnt resolved anything; we just couldnt bear to be apart any longer.

Eventually all that got sorted, and we decided that one way or another, we were in it for life. Then I had a health and fertility scare when I was thirty-five, and we decided wed best start trying immediately if we were going to have children at all; luckily, I got pregnant quickly. So there was Kavya, and then we discovered we were not good parents of babies. I mean, we were reasonably good to her, I think, but we found it incredibly hard, and there was a tremendous amount of exhaustion and trying not to resent the other person too badly, trying to have faith that wed love each other again on the other side of this sleep-deprived nightmare.

And we made it through, and things got better when she finally started sleeping more than three hours at a time, and by the time she was eighteen months we were starting to actually enjoy Kavi more than we found her exhausting, and enjoy each other again too  and then we talked it over and decided that we both really appreciated having siblings, and we wanted that for her too. Damn the torpedoes, full speed ahead.

So we tried again, knowing what we were getting into this time, and along came Anand, and he was even more exhausting than she had been, in a myriad of ways, and having two little ones was its own specialchallenge, lets call it, because the other words I might use there are a bit rude to use in speaking of ones beloved and cherished offspring. But we survived, somehow, and then Kavya was seven and Anand was five, and Kev and I were finally done with potty training and changing wet bedding in the middle of the night, finally getting to go to bed together and sleep for eight solid glorious hours in a row. We were even starting to get back on track with our respective work, which had been sorely slowed down by the little ones. We figured we had maybe five great years to look forward to, the golden stretch before the teen drama descended, and we were really very happy.

And then this. I was furious about the timing, that first day  it seemed so unfair, that after all the struggle and strain, we should finally be happy, and then this descended, a black blight on our lives. If Id been the sort of person to slam my fist through a door, or right into someones face, that wouldve been the day.

But of course, there was no one to blame, no one deciding to lay this burden on us now. It just happened. It could have happened earlier, or later. And the truth is, better now than before, when we were less solid in each other, more drained by the little ones still being so little. Better now than later too, while we are still relatively young and fit and strong. Its strange to say it, but really, if I had to get cancer in my life, this was the perfect time to do it.

Im not one to believe in a god that has a plan for our lives, and certainly I will never say that we arent given more than we can bear  I have seen too many people loaded far too heavily with more than they can bear, more than they should ever be asked to bear, at the worst possible times. But I will count my blessings in this moment, and say that I am, we are, lucky, that cancer found us in a moment when we are strong. This could have been much worse.

Im writing this on a plane, on my way to a science fiction convention, to see Jed (my sweetie) and Alex (a beloved ex and excellent friend) and many other old friends. Kevin asked me last night if I was looking forward to the weekend, and I said yes, that it would be good, so good, to have a break from cancer. I carry the cancer with me, of course, but at home, theres been an endless flurry of medical calls and appointments and procedures  for the next four days, I can leave all that behind. Leave him behind too, to deal with the kids and the house for a few days, fly away from responsibilities.

Ive always loved flying; theres something about casting off from the earth that offers clarity of mind. There was one flight, decades ago, where I started out desperately unhappy with Kevin, angry for some reason I cant remember now. I was crying in my seat, trying to be discreet so as not to bother my seatmate. But by the end of the flight, somewhere between the mountain peaks and the endless stretch of sky, I had decided I wasnt ready to give up yet. I wanted him still, and I was going to keep fighting for us, despite everything.

So Ill take my four days, spend time with other people I love, think about books and science fiction, hopefully more than I think about cancer.

When its done, Ill fly back to Kevin and the rest of my life. 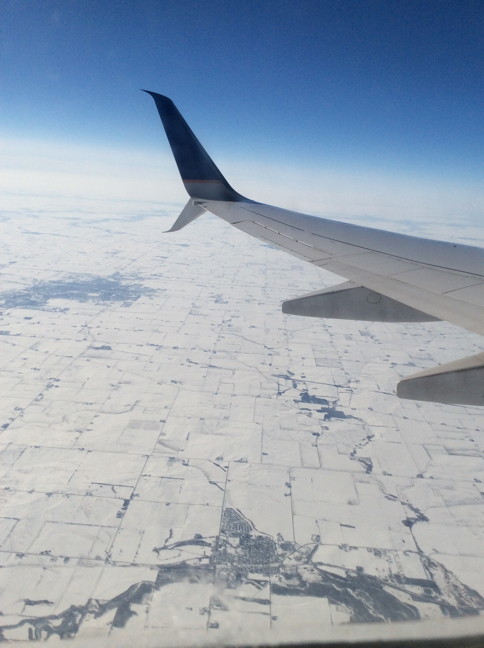