So, my understanding is that they wanted me to have these to check for additional metastases (signs the cancer has spread). We are really hoping these two tests come back negative. I have no symptoms of bone pain, but the bone scan will check whether my bones are healthy and also create a set of baseline images that could be compared to any future bone scans that are done. This test is often skipped with my kind of breast cancer, but I'm happy the Loyola docs are being thorough, even if it's unlikely to find anything.

You show up having fasted for four hours (so I had a good breakfast early). The bone scan started with an injection of radioactive material in my arm. (Tiny prick -- skilled tech this time, and I barely felt it. Well done, sir.) Science detour for those interested: "[The radioactive material] will be taken up by the bodys bone-making cells over the next few hours. These bone-making cells are found mostly in areas damaged by disease, where they are busily trying to make new bone to patch the holes. After waiting 2 to 4 hours for the radioactive substance to be absorbed, the doctor uses a special camera to scan the body. Areas of extra bone activity (common in both cancer and arthritis) will show up on the scan because the radioactive substance collects in areas of new bone formation. These areas appear as dark patches on the film. Any part of the bone can be affected by cancer." (http://www.breastcancer.org/symptoms/testing/types/bone_scans)

Then they sent me off to do the CT scan, because, as noted above, it takes a while before your bones are fully radioactive. Yes, I made jokes about Spiderman, and the tech countered with jokes about the Hulk. I would rather be able to climb walls and spin webs in my daily life, I think, than be immensely strong and rip out of my clothes, if those are my two choices. The Loyola radiology department is in the basement of the hospital, and I asked if that was because of the radiation, and he said quite possibly, because back in the day, they worried about such things and were also spewing vast amounts of radiation hither and yon -- okay, that's not exactly how he put it, but close. These days, it's much more controlled and targeted, and apparently the (newer) Northwestern radiology department is on the sixth or eighth floor and he would really like to work someplace with windows someday. Ah well.

When the tech was injecting me (with RADIATION, whee!), he also put in a IV line. So I scooted off to CT with that in place. The CT scan examines your internal organs. Once I got there, I was given 1000 mg (I think) of horrid stuff to drink, and asked to try to get it down in half an hour. Readers, this was not easy. Any given sip of the milky substance wasn't so bad -- it had a faintly sweet, maybe citric flavor. But it's just a big volume of thick liquid to try to get down. I ended up holding my nose for some of it, but I'm not sure that actually helped.

This was absolutely the worst part of the whole day, and I'll note here that if you pick up the solution (barium sulfate, which allows for better computer tomography of the gastrointestinal tract) in advance, you can start sipping it before you even get to the hospital -- spreading it out over an hour or two would, I'm pretty sure, have been much easier.

When I was done with it, they had me change into a gown. Now, it turns out that they don't actually need you naked for this one, but you can't have any metal on you, which includes things like zippers, metal bits on your shoes, etc. But one woman in the room with me had clearly been through the drill before, and she showed up in sweats, with slipper shoes, and she got to keep all her clothes on and just threw a patient robe over it (to signal 'patient,' I suppose). Smart! But I don't really mind stripping down, and when they had me lay on the bed, they added a few blankets, and I was totally comfortable.

Arms above the head, and then I slid feet first into the machine, back and forth a few times, holding my breath when it told me to (presumably to help me hold still). Halfway through, they added the contrast through the IV line, and that was FASCINATING -- the tech had said it'd feel warm, but it was almost hot, and I could feel it rushing through me, moving through various parts of my body. (He was a sweet older black man and kept talking about the department's warm Southern hospitality, which was pretty funny, and also led us off onto a long discussion of New Orleans and the food there and I was really craving cheese grits by the end of that.) It felt like when you slide down into a hot bath -- but on the INSIDE of your body. Neat. Weird!

Then that was done, and I got dressed and headed back over to the bone scan (pictured below -- I had my phone with me for this one, so could grab a few pics). Lie down again, fully dressed, and they gently strap your arms to your sides and your feet together, so you'll lie still. Then about ten minutes of the machine scanning you. I actually fell asleep; I was starting to feel pretty wrung out by that point. And that was it -- all done.

I felt kind of shaky afterwards, which I think was the barium + contrast; I was okay to drive back, but I do think that if I weren't relatively young and fit, this would all have been harder on me -- some folks had brought friends or partners with them, and if you're doing this, I'd absolutely consider that, esp. if you're not in good health generally. (I still *feel* like I'm in good health, despite the cancer. Lots of energy, still getting my 10,000+ steps a day, etc.) When I got home, I had some real food and pretty much climbed into bed for the rest of the day. I *could* have worked instead, but resting was the better part of valor. Common side effects of the barium include nausea and diarrhea, so your friends and colleagues would rather you went to bed, I think!

Props to whomever came up with those beautiful photos to layer over what would otherwise be ghastly fluorescent light panels -- really added brightness and cheer to those basement rooms. The CT scan had clouds and a bright spray of bougainvillea. There was lots of waiting, so do bring some kind of entertainment -- Sir Terry Pratchett kept me company for the day, and I was very grateful for his presence. Overall, not a bad day. We'll see what the results show. 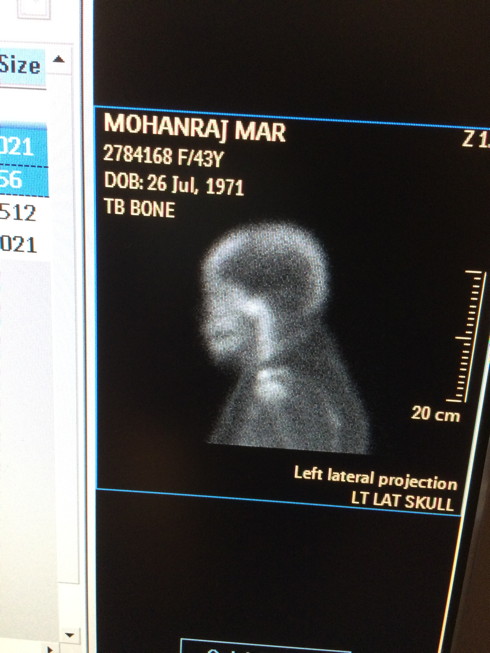 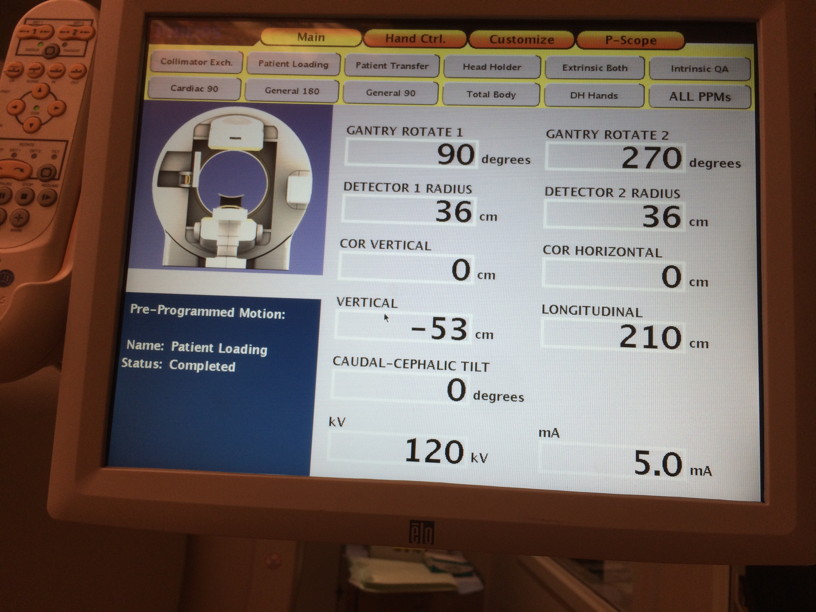 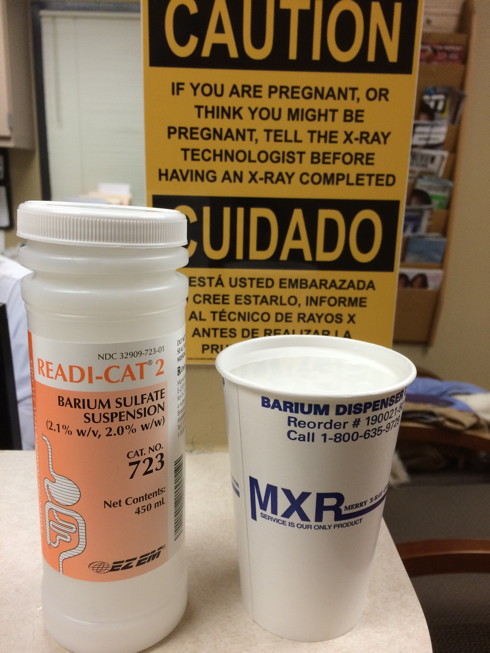 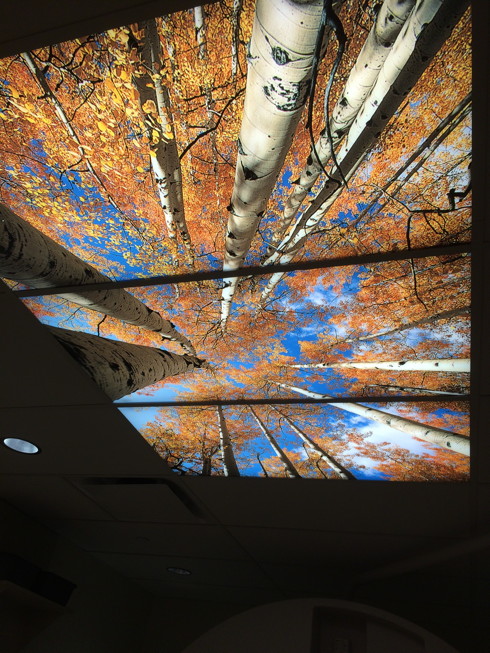