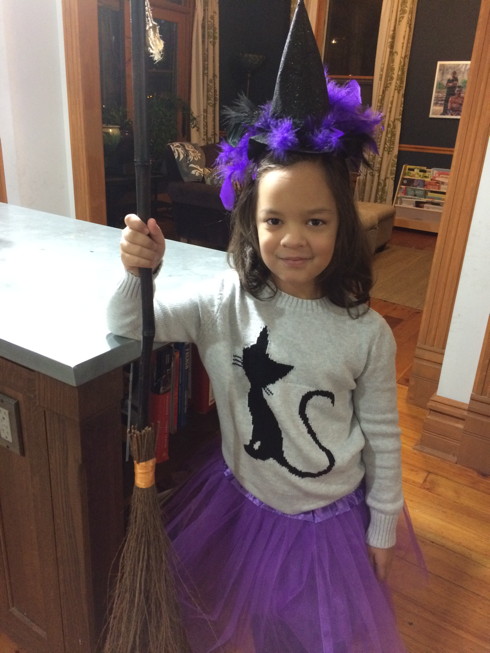 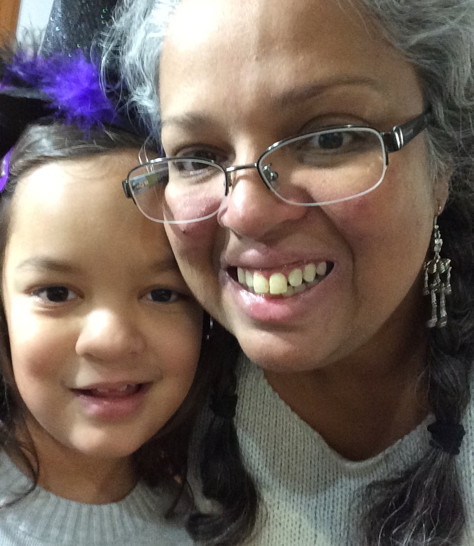 Anand the Skeleton, off to pre-school. 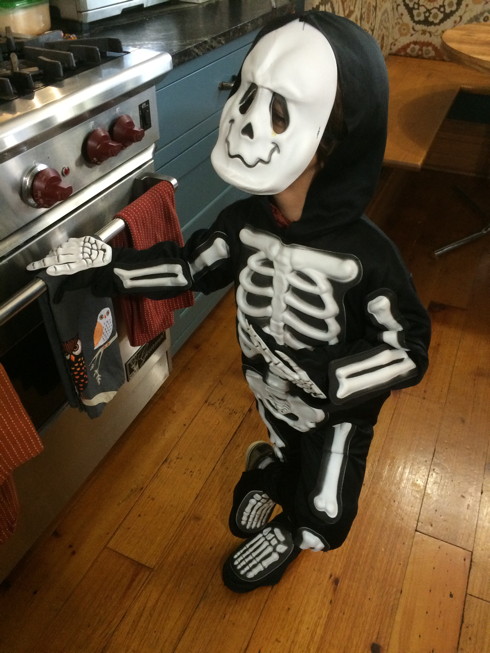 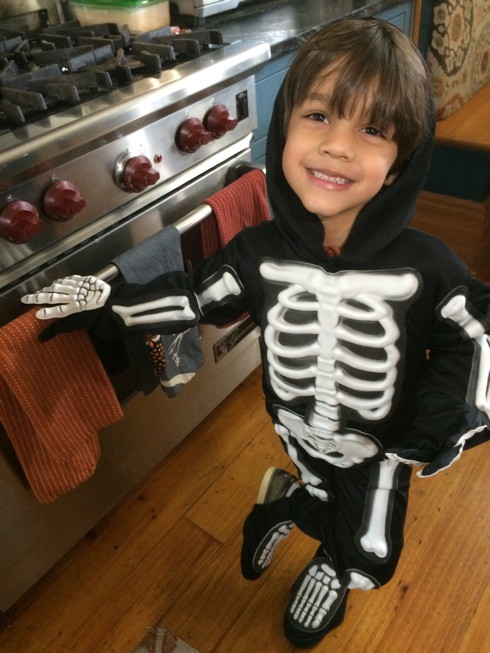 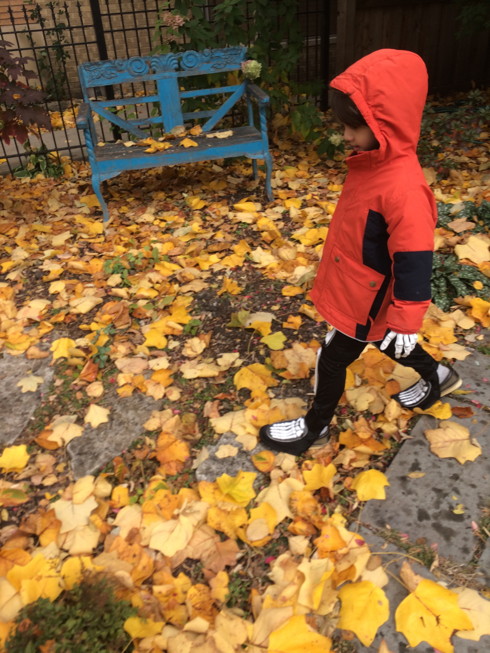 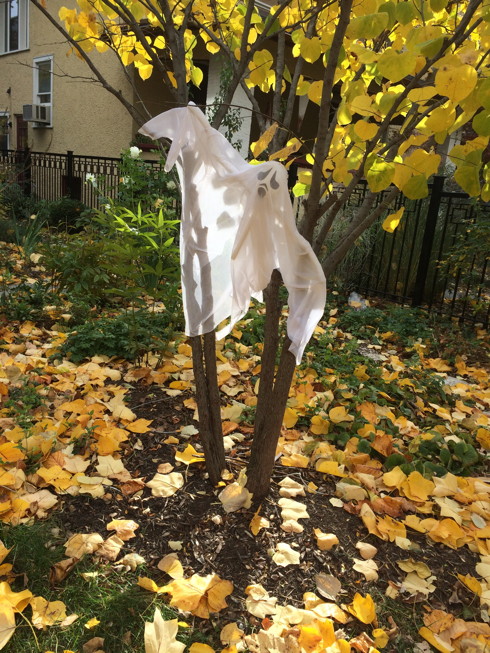 Before the storm hit -- our house and our neighbors' for Halloween. I am always impressed with their house -- it's a little hard to see in this photo, but there are big cut-outs of cat-like eyes in the upper windows, along with the bloodied teeth in the porch opening. They shine a red light there at night, and it turns their house into a huge, gaping maw. It's awesome. We haven't come up with anything equally clever (one of these years, will probably add a screaming woman's figure in those upper windows, appropriately Victorian-ish, and possibly a glowing chicken-wire woman-in-dress figure in the yard), but I do like the brilliance of the tulip tree's fallen gold leaves blanketing the front yard, along with the burning bush turning its autumnal red and the blue-purple of the house. Color. Good. 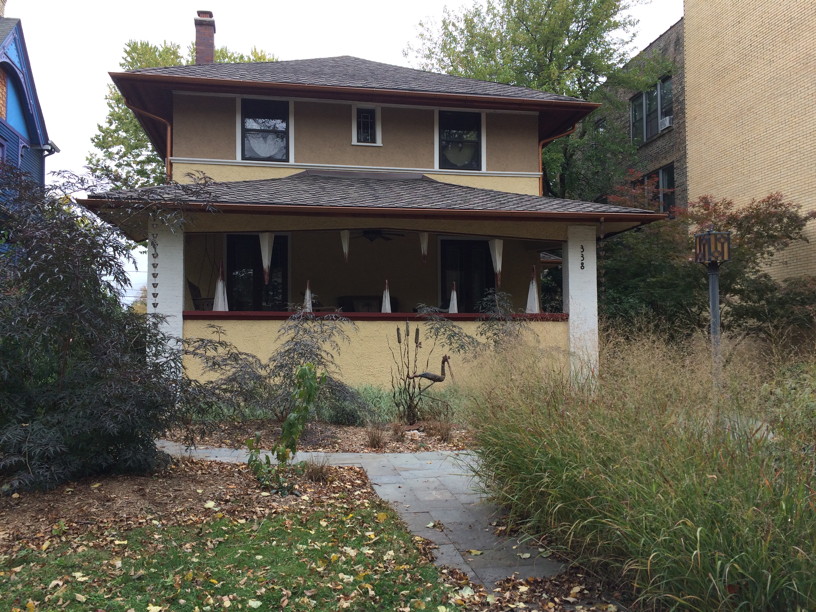 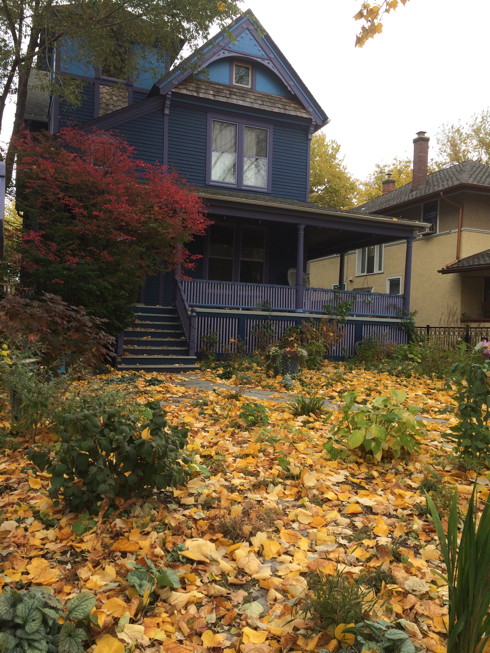 I thought the heavy winds and icy sleet would deter them (it certainly had me pulling out my heavy winter blanket-coat that goes down to my ankles, thank you, Lands' End), but Kavya and Anand were remarkably cheerful through more than two dozen houses of trick-or-treating. At 4 p.m., there were colorful hordes of little kids running gleefully through the streets around here, accompanied by stoic elders, huddling into their hoods. 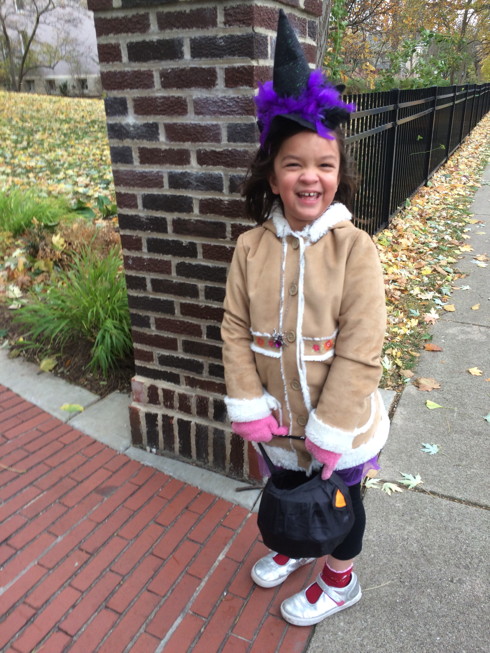 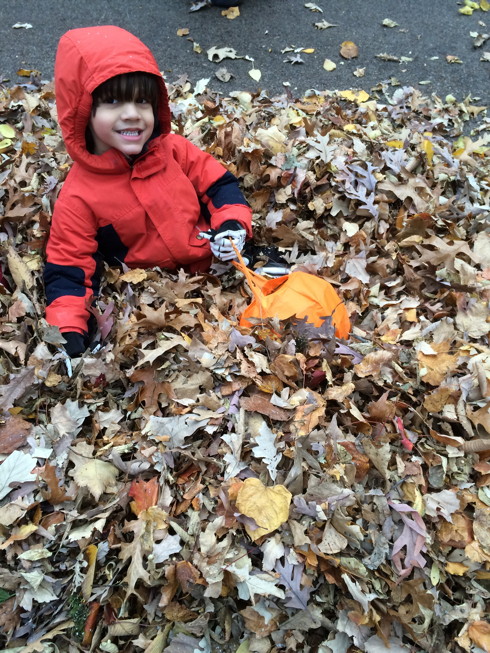 Roshani turned her house into Hogwarts for Halloween -- it was so awesome, and I hope she posts lots of pictures. The dining room had floating candles on the ceiling, that's how awesome it was. I volunteered to make Harry Potter cookies, and they came out decently, I think. 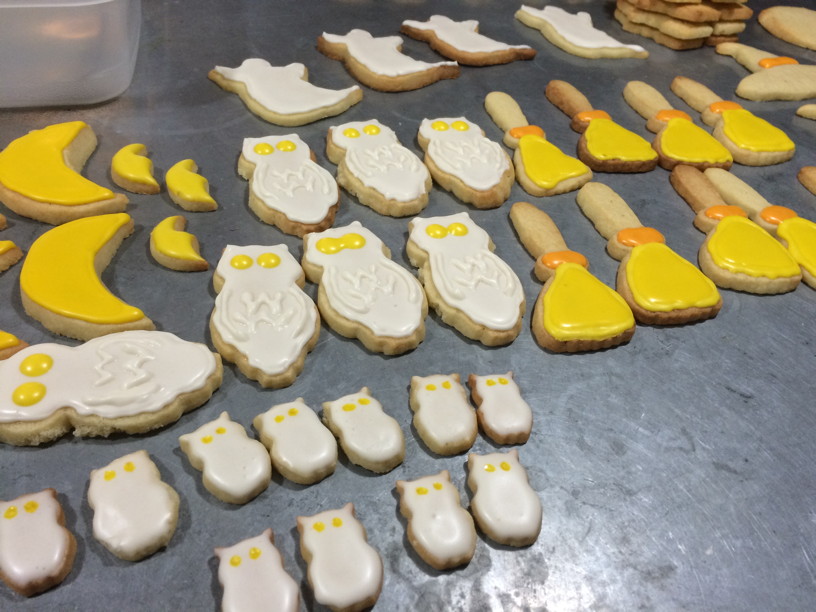 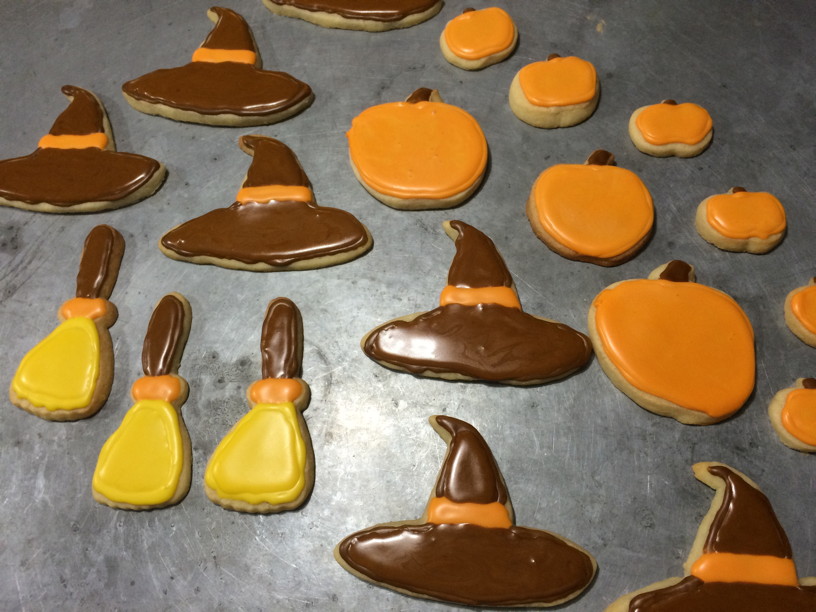 I ran out of time to add finishing details on all of them -- I had thought about little yellow window lights on the Hogwarts castle, for example, and the pumpkins could really use curving lines to suggest more of a bulbous shape. And the sorting hat should've skipped the orange band and had more raggedy layer details instead, now that I'm thinking about it. That's okay -- I love how the bigger owls came out. This is the first time I've added detailing to iced cookies after the main layer, and it worked pretty well. 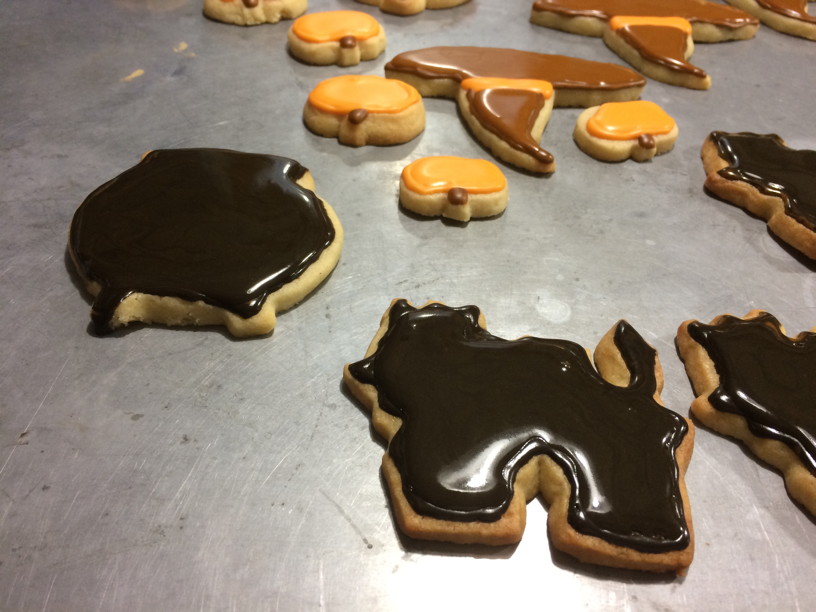 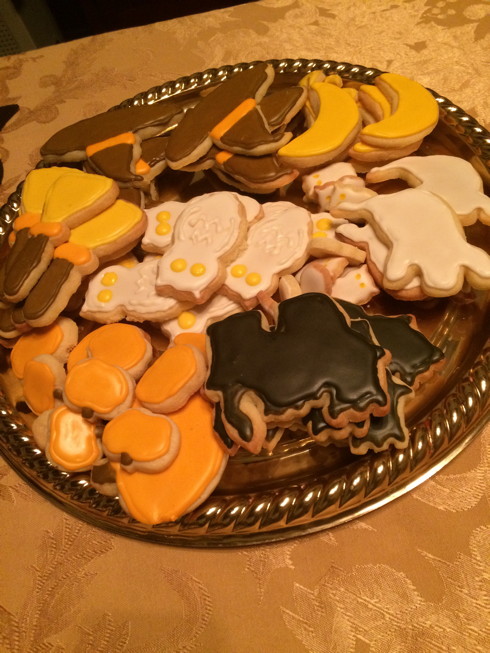 I couldn't do this sort of thing regularly -- it probably took three hours to ice them, start to finish, which is fine on a lazy day while you're catching up on your tv shows, but not something I can fit into my life more than a few times a year. Also it made my hand hurt by the end. But on occasion, it is definitely fun. 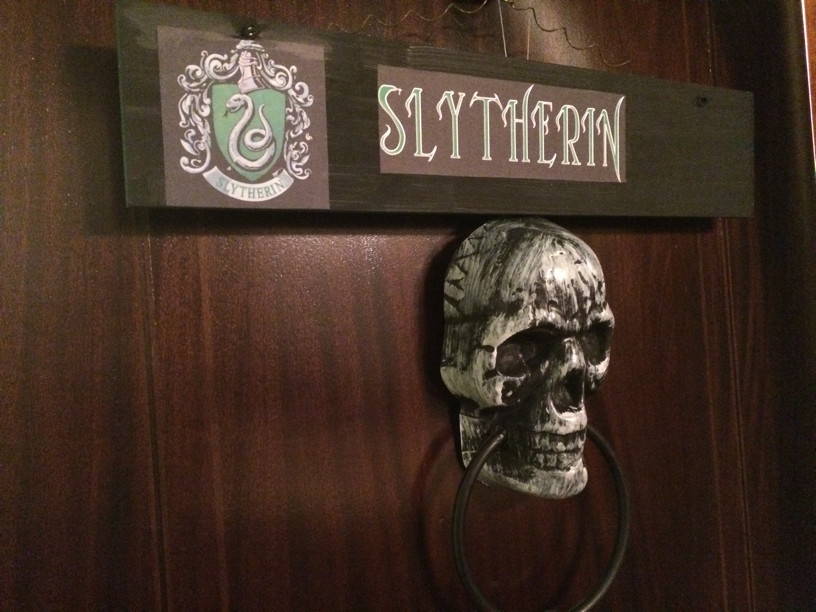 Leaving Roshani's late, the storm had subsided, and it was beautifully clear and spooky, with a frost of snow on the grass. The children found a big stick and drew patterns in the snow while I tried to capture the moon. A splendid Halloween. 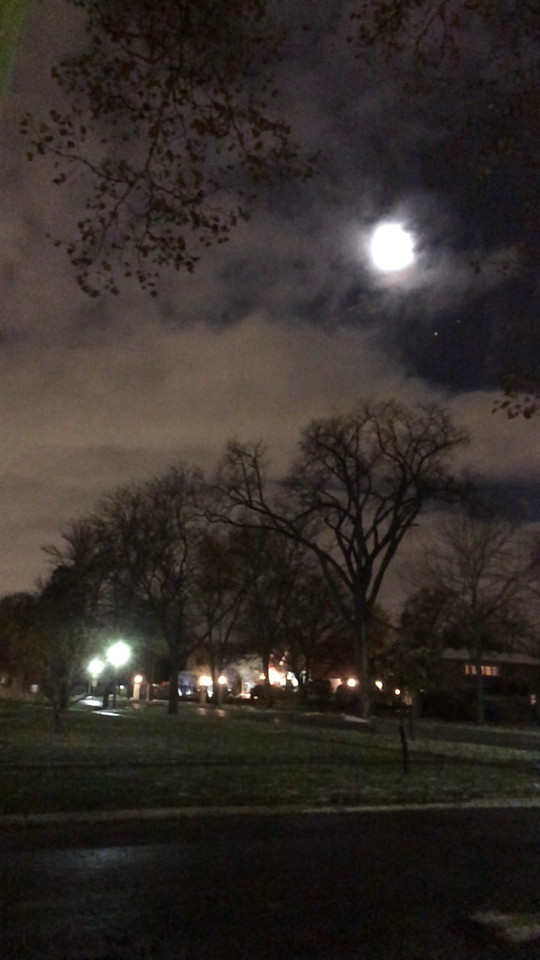 Anand came down at 6 this morning and demanded someone to play with -- his sister is still out cold, since they stayed up two hours later than usual at Roshani's Halloween party last night. I told him he could take a piece of Halloween candy from his bag and a Kindle and go curl up in his bed. He came back with a HUGE Hershey bar for me to open for him. I made him only take half of it, but still -- that's about four times as much sugar as I intended him to have before breakfast. Oh well -- day after Halloween. Pretty sure he'll survive the sugar + electronics overdose.