Skip to content
Fairy candles, cimcifuga, actaea, black bugbane, black snakeroot, black cohosh. Gosh, I love this plant. Kat was in the yard with me yesterday, when I was cutting Annabelle hydrangea, pink monarda, and sea holly for our homes, and she said, "What *is* that?" It is quite striking, and totally looks like fairy candelabra, especially at this moment, when the buds have not yet opened to their full featheriness. Photo of me included for scale, so you can see that the spires are taller than I am. Typically planted in the back of a perennial shade border, though it seems happiest in moist dappled shade. 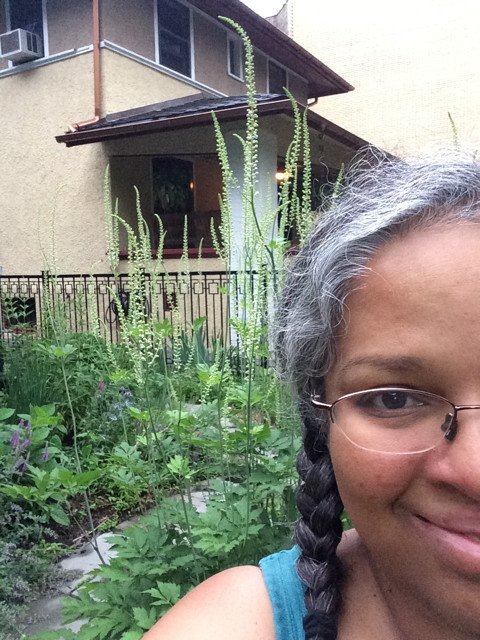 This is not a plant I planted, but a gorgeous native that somehow managed to survive the construction wasteland my yard had become a few years ago. If you have room for it, it is a stunningly gorgeous creature and if you give it a few years to get settled, you will be very happy to have in your yard. It's a large perennial that can reach eight feet when very well grown -- in my garden, the spires reach to about six feet high, with around a 3' diameter to the plant's base; that's a standard mature size. It does have a strong fragrance -- I like it, as do many folks, but some people (and some bugs) don't! 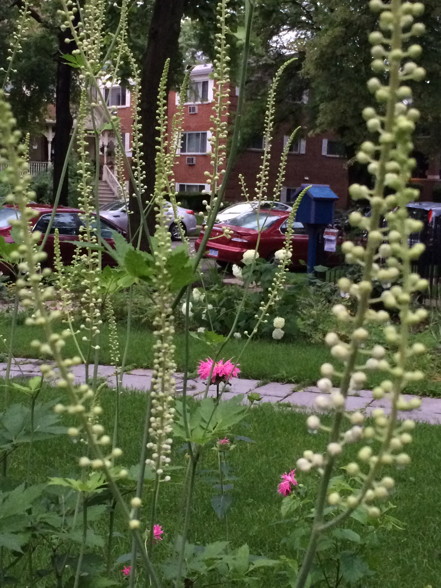 I have it near some Canadian wild ginger and some pink monarda, backed by a redbud tree. The article recommends pairing it with Japanese forest grass as well -- which has an awesome clumpy shape that I love, but it looks like it's gold-ish? I'm wondering if there's a similar green or green-and-white version of that grass, because I'm trying to keep to cool tones in my front yard. 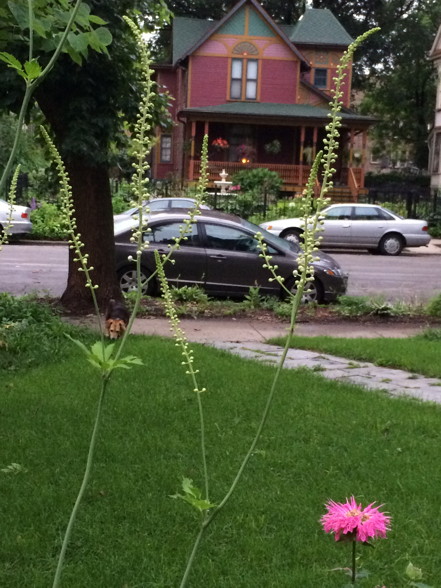 Here's a nice little piece about it:

"I had finally remembered how to spell ci-mi-ci-fuga. Of course, then the species name was changed to Actaea. Actaea may be easier to spell, but I had the rhythm down on Cimicifuga and was not inclined to give it up. Mumble, mumble, rottenruckenshuch."

And I love this: "Plants with lots of common names usually have a long history with humankind. Black cohosh derives its name from an Algonquin name for the plant. Native Americans used the roots in a number of medicinal remedies ranging from snakebite to female ailments. Squawroot was a name sometimes applied to the plant, indicating its use for treating female distress during menstruation and menopause.

Until recent times, medicine has been the domain of men, even the treatment of female disorders. Though the male doctors may have had lots of book learning on the subject, their lack of first-hand experience and empathy sometimes lead to treatments that went beyond the medical dictum of "first, do no harm."

Following the Civil War, one of the prescribed treatments for severe menstrual cramping was the surgical removal of healthy ovaries. That 40 percent of the patients died from the procedure because of poor sanitary conditions, makes the cure far worse than the problem. This was the medical state of affairs when one of America's first widely successful businesswoman introduced a patent medicine offering a non-surgical alternative.

The woman was Lydia Pinkham (1819-1883), a Massachusetts woman who suddenly found herself obliged to support her family after her husband lost his fortune in the economic crash of 1873. For years, she had been treating herself and female neighbors with an herbal homebrew that worked wonders on the female constitution.

These were during the days before the Food and Drug Administration, so all you had to do was promote a product heavily, and you were assured a good market. Some of these patent medicines (called such because their ingredient list was patented) worked and some didn't, but you couldn't tell by the elaborate hucksterism used to promote the products.

Lydia patented her product, Lydia Pinkham's Vegetable Compound, in 1876 and began selling it door to door for $1 a bottle. A couple years later, one of her sons had the idea of adding her picture to all promotional material, and the business took off. By the time of her death, she was selling $300,000 per year.

Another touch that improved her outreach was that she started soliciting questions from her customers. Her responses were always hand written and signed "Mrs. Pinkham." In these responses, her other pills and elixirs were shamelessly promoted. The fact that she was still writing the letters 30 years after she died didn't seem to bother her faithful customers, though one ladies' magazine printed a photo of her tombstone in 1905.

Her vegetable compound was a mixture of five herbs, all dissolved in 18 percent alcohol. If the herbs didn't cure you, the alcohol content certainly made you forget your aches and pains.

The company survived into the 1920s when it had its highest sales of $3.8 million. Her formula - minus the alcohol - is still available and manufactured by Numark Labs. As so often happens, her remedy was a much better solution to menstrual problems than that suggested by the surgeons. Modern studies now suggest that the drug interacts with serotonin receptors in the brain that regulate body temperature."