Skip to content
At my aunt and uncle's house for the day, so internet! Some photos from the trip -- my appa, in full-on raconteur mode; he's one of the best storytellers I know. (And he wouldn't hesitate to claim the honor. ) The kids enjoying a) my parents' industrial strength fans, and b) playing pretend battle in the woods next to the house. Finally, one of the least flattering photos of me I've seen in a while, and normally I wouldn't put it onto Facebook for the world to see, but there are so few photos of me and my dad -- ah well. Vanity can go hang. As I was taking this, my seventy-one-year-old father said, "So this is a selfie?" Yes, appa, this is a selfie. Exactly. 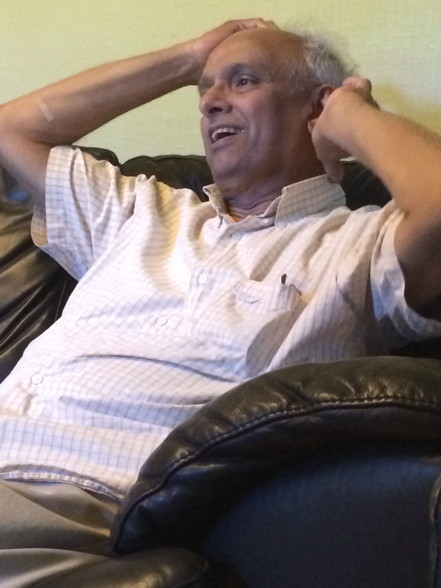 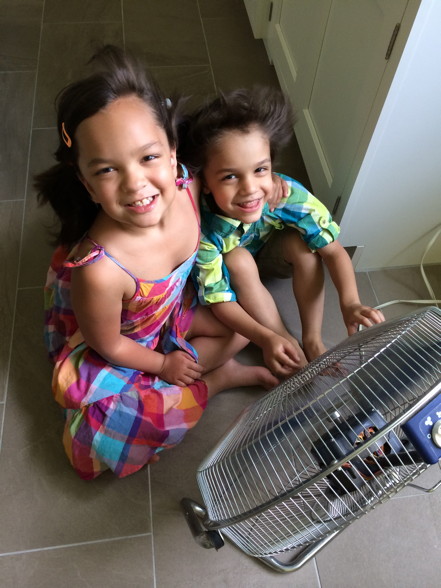 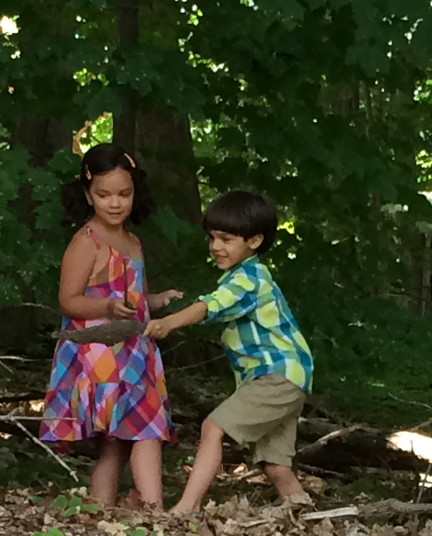 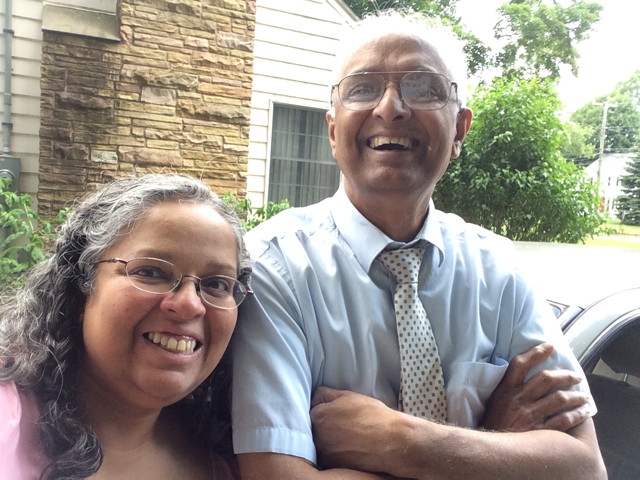 My mother took us to the Meriden mall on Friday so she could spoil the children in multiple ways. Patriotic outfits to wear at the 4th of the July next weekend, three different kinds of candy, and rides in the little coin-operated machines. The helicopter actually went up and down. Saturday, my sister Mirna and her husband Gian arrived from New York, and much soccer, excuse me, futbol, was watched. Here, Mirna is teaching Kavi how to say, "Vamos, Chile!" Afterwards, Gian (who is British and an ardent futbol fan) took Kavi out back to practice volleys. GOAL!!! 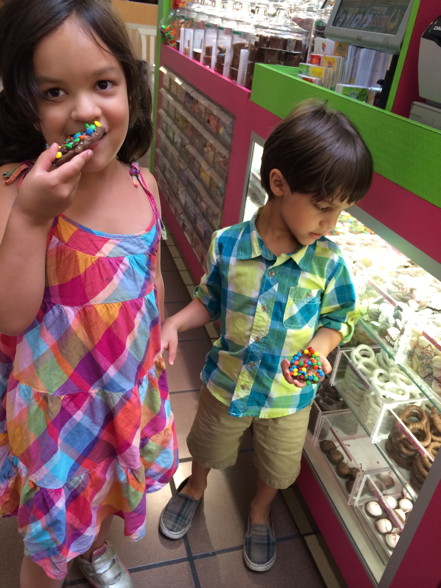 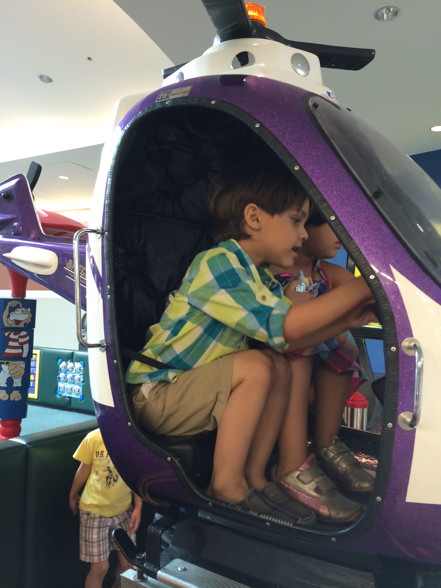 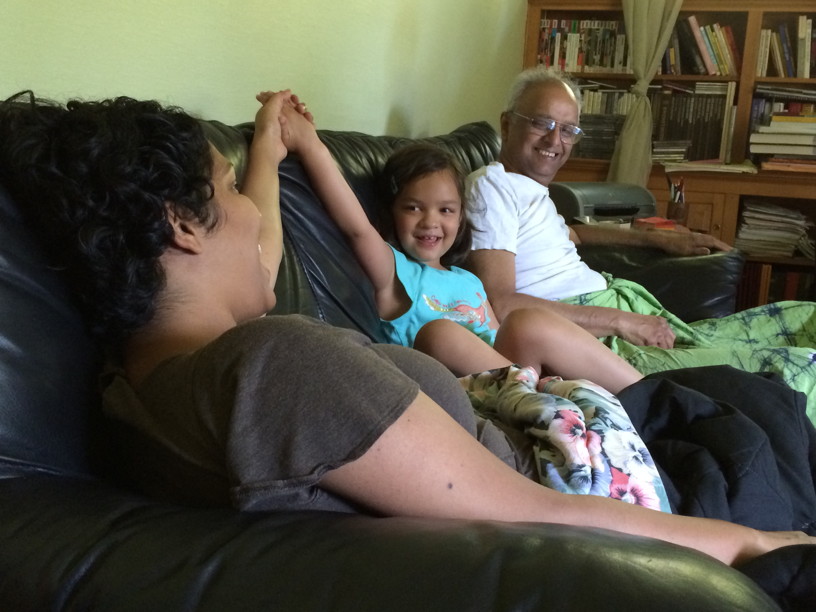 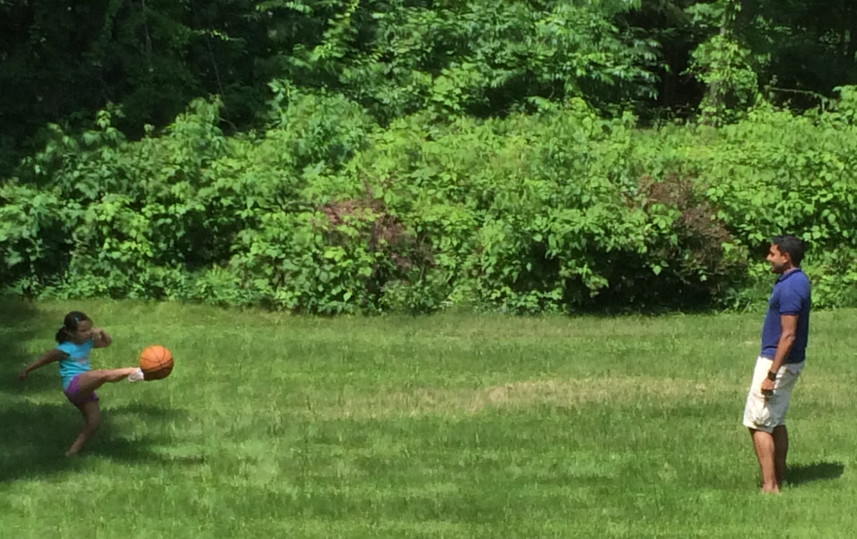 Dinner out -- Mirna and Gian somehow look very alike, not exactly in facial features, but inattitude? Something. They look like New Yorkers, I think. Next pic is Kavi with her second cousin, Natalya, my cousin Shantha's daughter; Natalya is just a month older than Kavi, which is nice! They are getting to be buddies. At home that evening, my dad allowed Kavi to 'water' my mother's flowerbed. If, by water, you mean assault with deadly force. And in the last pic, my children are teaching my mom how to play Jellies on the Kindle. My mother was doing quite well at Fruit Ninja -- I think a tablet and some games may be in her future. 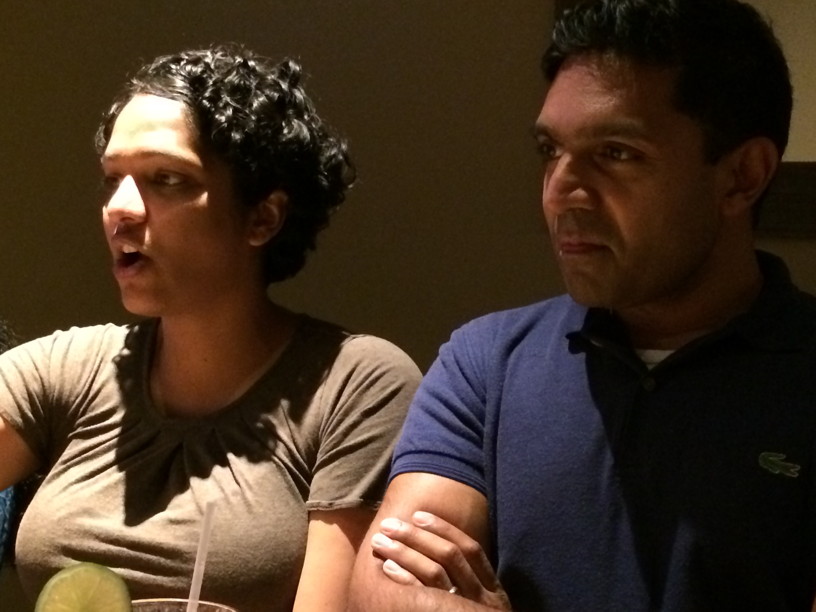 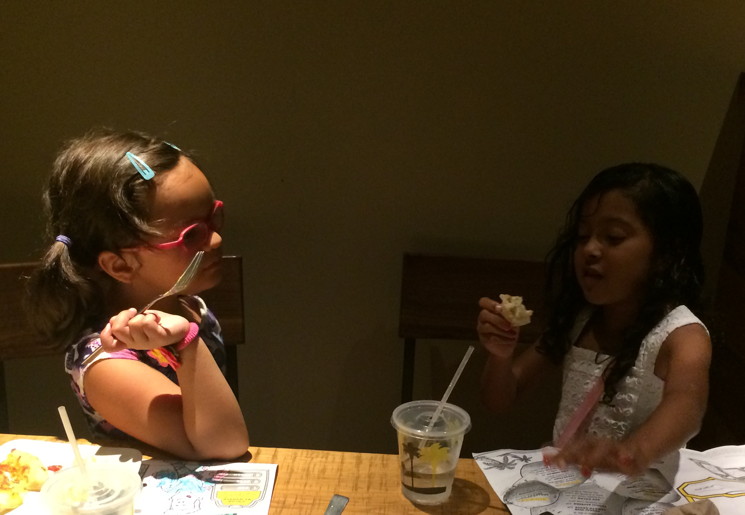 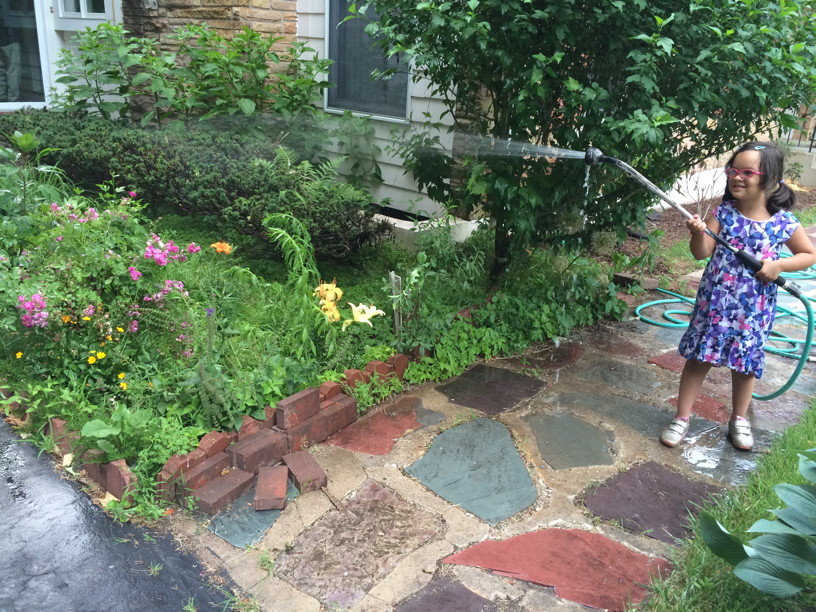 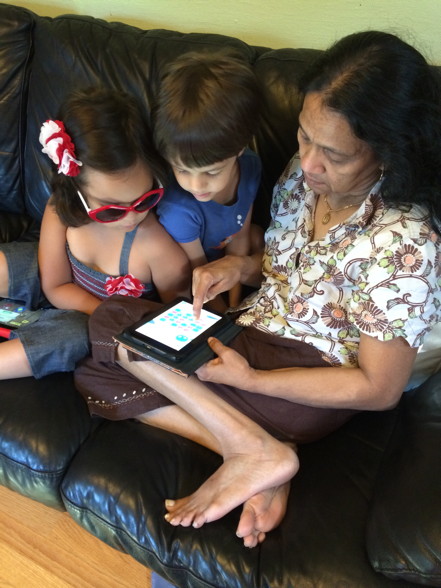 Kavya enters the water, cheerfully if a bit gingerly due to the cold. The sun was shining nice and hot, though, so it didn't take long before she was frolicking wildly. Anand took lots of coaxing, but the giant dolphin and my cousin Shantha giving him a ride definitely helped. Kavi made best friends with the inflatable whales. And then the whales and dolphin had a battle. Inflatables are really terrific for helping littles feel safe in the water. And eventually, Kavi managed to convince Anand that his toes really would touch the bottom of the shallow end. Whee! 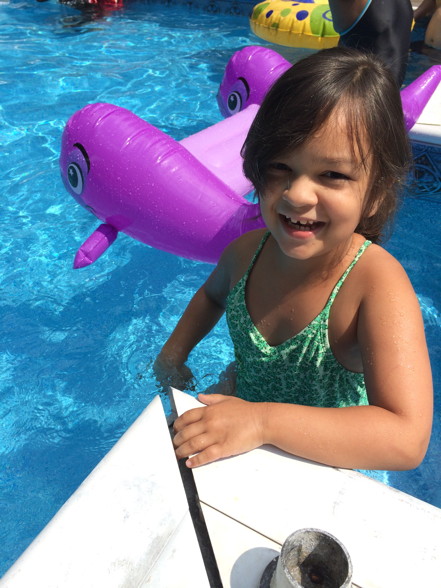 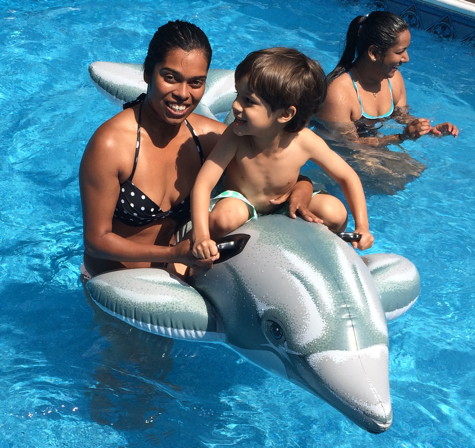 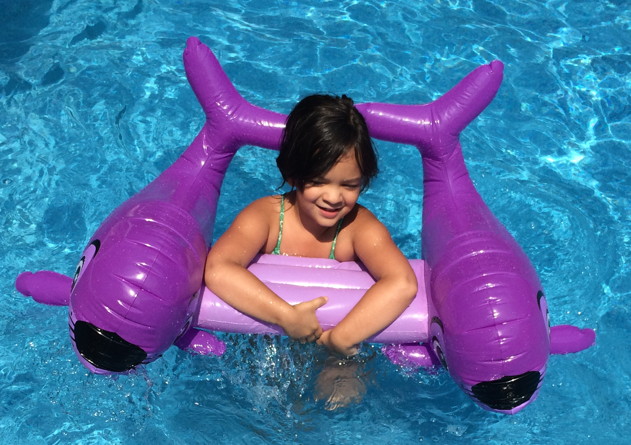 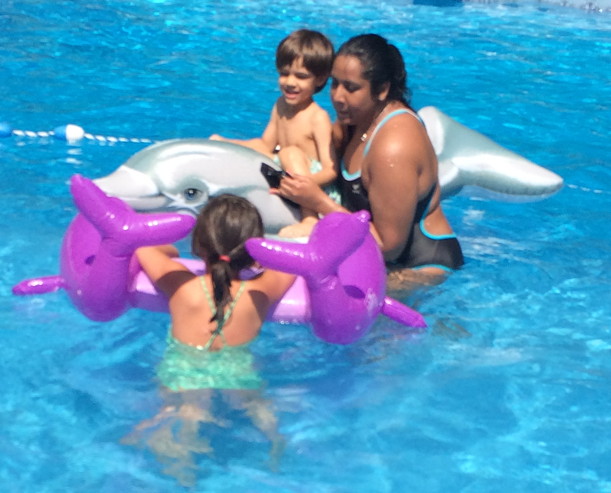 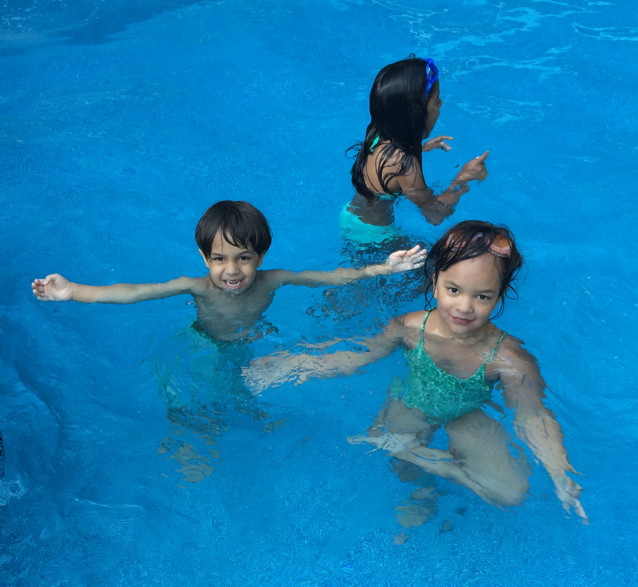 Last pics from the trip, I suspect. My mother and aunt experimenting with food, discussing intently whether there is too much dressing for the salad. It always amuses me a bit when they try to make American food. They're excellent cooks, but somehow, something gets slightly lost in translation. Anand is blissed out, with an iPad on loan (with new games), and a cousin-once-removed aka "New Friend!" to drape himself over. Kavya and Natalya are being supervised by Sharlini in the making of s'mores. A lovely summer day, and all was right with the world. 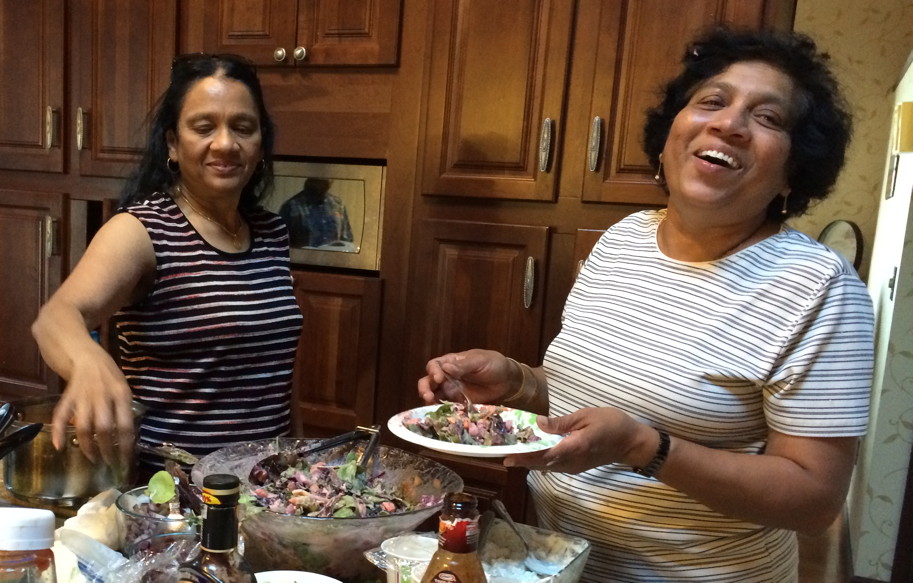 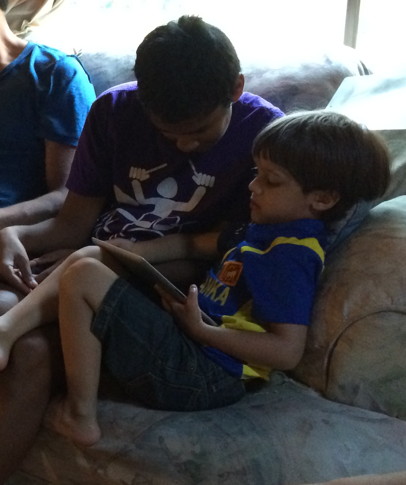 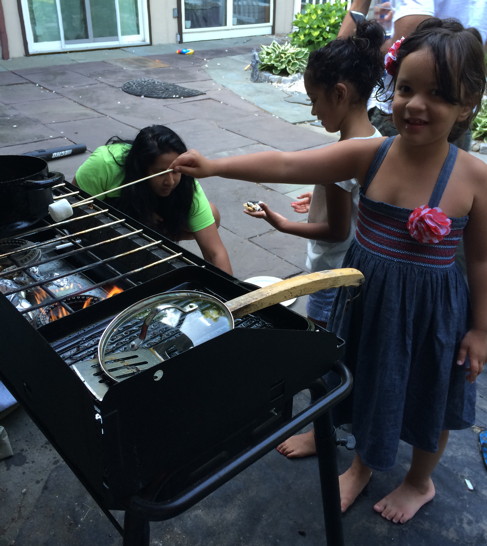