Facebook Instagram Youtube Twitter Patreon Shopping-bag
Menu
Here's one item that came out exactly as planned, and awfully pretty it is too. The recipe says one is not supposed to eat the garnishes, but they do make it wonderfully festive. I had some orange jello, so I used that instead of cranberry jello (with the orange vodka and cranberry juice cocktail), so the resulting shots are more orangey than in the original. It's nice that way for Thanksgiving, I think, but if I were making them for Christmas, I'd stick with the original recipe. I was going to do them in plastic cups, for ease of eating, but they didn't have any at the store. So, oh well, I had to use the shot glasses instead, with my tiny appetizer spoons, which means the whole endeavor has gotten pretty far from the original concept of a jello shot. And yet, fabulous in its ridiculousness. :-) Also, they smell amazing, with fresh rosemary clipped from my little shrub. 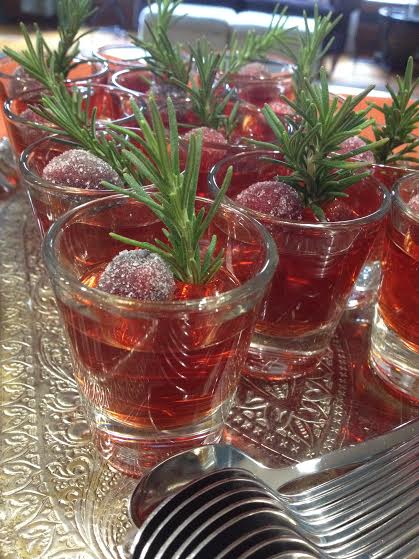