Facebook Instagram Youtube Twitter Patreon Shopping-bag
Menu
So, as you may remember, I was having storage issues in my study. A severe lack of shelving (pics of the disaster), occasioned in part by the odd structure of the room. See, my study was originally, when the house was built in 1885, almost certainly just an open-air sleeping porch. (As far as we can tell from the Historic Society's fire map records.) It was closed off with a slanted roof at some point -- I'm guessing in 1911, when the wide plank pine floors were covered with thin strip oak (there were 1911 newspapers between the two layers, letting us date that shift).

When we bought the house, we got permission from the historic commission to punch up through the ceiling and convert a severely slant-roofed little closet into a workable study for me. Every writer needs a room of her own, y'know. But one bit of the slanty roof would be better remaining (for some roofing reason I can't remember), and we also wanted to echo the way the tower across the street looked, with a bit of triangle roofline against the square tower, and also, most importantly, preserve an indicator of the history of the house. So instead of pushing all the way out to make four normal walls, we kept a bit of the slanty roof on three sides. Boy, it's hard to explain all this in words. Here, you can see it more easily here, with photos from the renovation.

Okay, so all of that is prelude to explaining that what I needed were low shelves that would fit in the narrow nook behind the desk. And I thought IKEA's Expedit shelf might work, and be way cheaper ($60 / shelf, for 3 of them) than doing custom built-ins. So I tried it, and I like it. I do actually have to crawl under the desk to get to some of the storage, but since that's stuff I'm probably going to access...umm...maybe never, but certainly no more than once a year, I'm okay with that. When I get too old to bend over, hopefully the kids will be willing to crawl for me.

Now my only question is whether I want to either paint or wallpaper the wall behind the bookshelves (both the very low wall, and the slanted walls). Maybe! But it's probably not going to happen this summer. 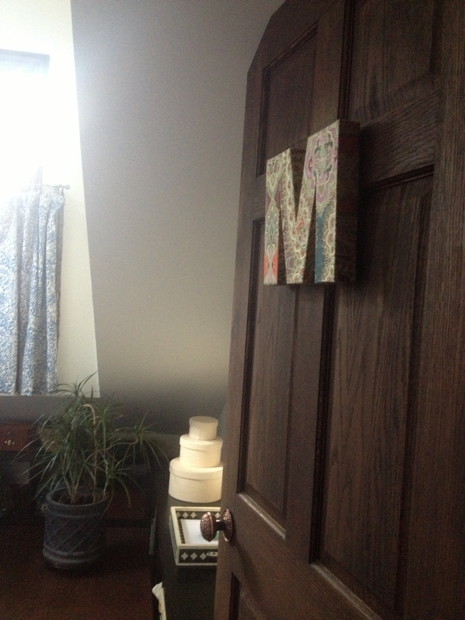 Door to my office! Note the top left corner is cut off -- we had to do that to accommodate the slanty roof bit. I actually kind of like it; is charming. New shelves, in black, on the floor. 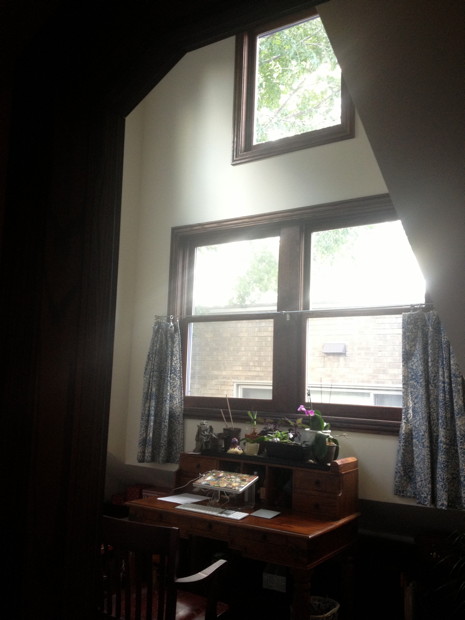 We framed the trim around the door on a slant too, to match the cut out triangle on the door. It feels very quirky and Victorian. :-) I don't love the apartment building a few feet away, and hung those curtains thinking I would hide it from view, but in practice, in the summer I generally want those windows open to catch breeze And more light makes me happy. Sometimes I close them for coziness in winter. 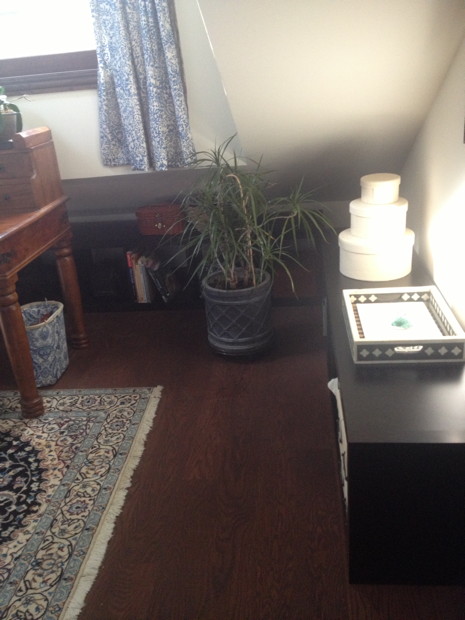 Closer view of the shelves. As you can see, if you peer, right now, they just meet at the corner, leaving a square gap, which looks a bit odd. I could push one forward, to fill that, but I'd lose a bit of storage underneath then. So I dunno.

I could also raise them on either castors or feet; they might have to come out a bit from the wall behind the desk, but that would be okay. Not sure if it would look better, though. 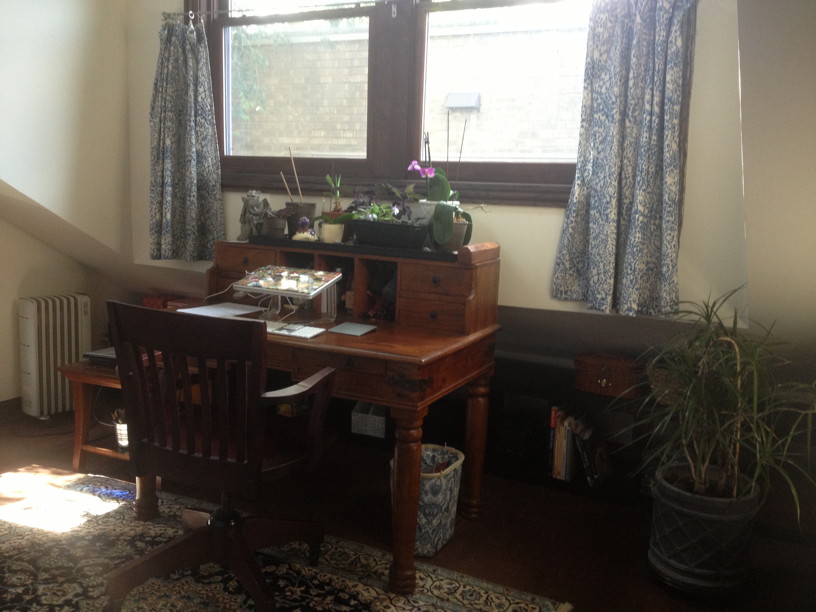 There are two Expedit bookshelves, end to end, running along the length of the room. I can't put tall things on top, because of the slant, but some smaller items tuck in just fine. 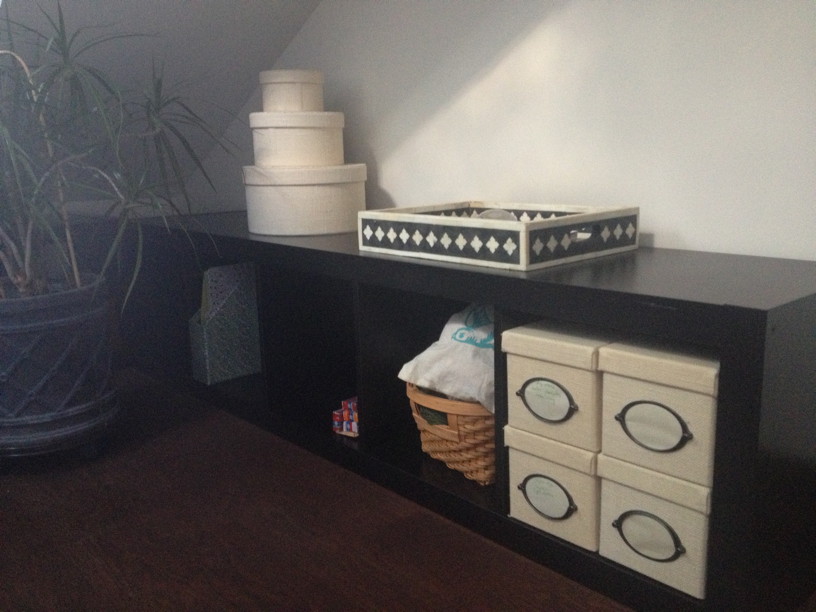 The little cream boxes are from IKEA, so unsurprisingly, they fit very neatly into a a shelf. Hatboxes from IKEA too. 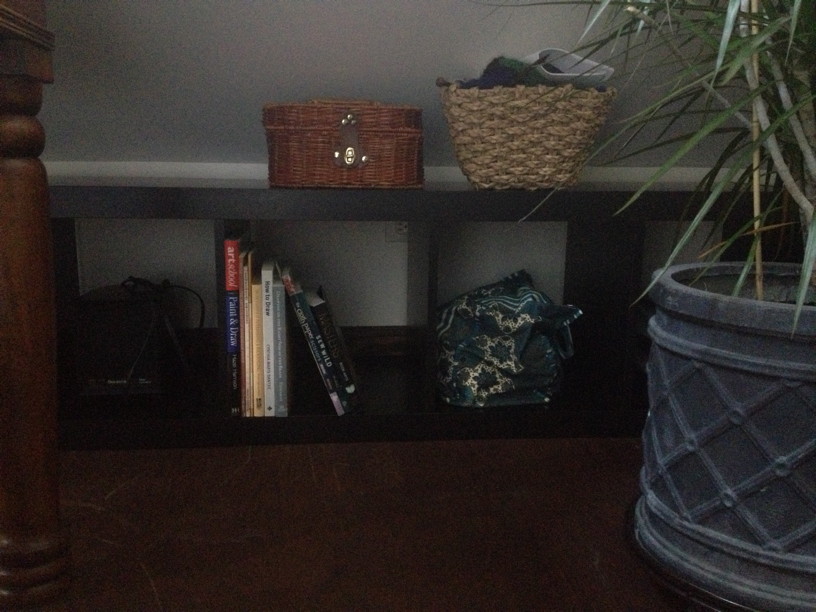 Better raised up? Or does that just invite dust and make it look less built-in? 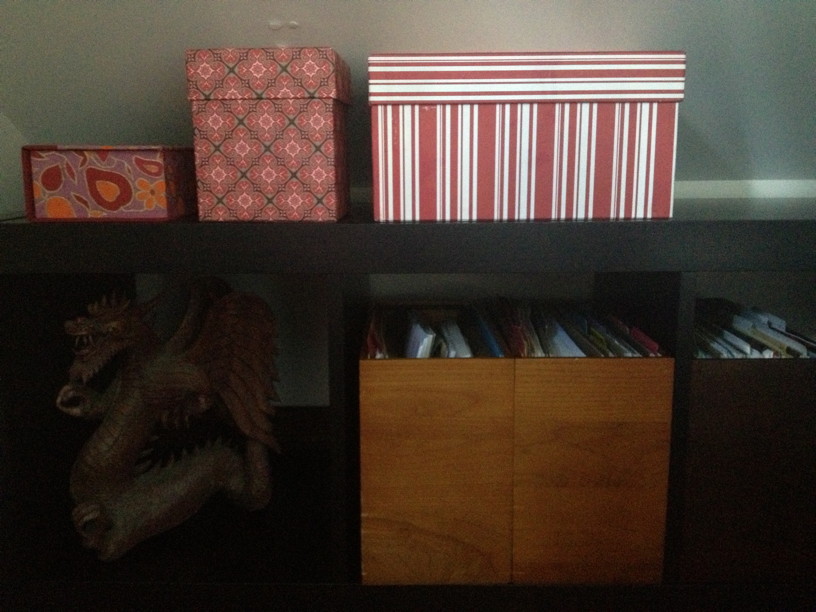 Love letters and fan mail in the red boxes. Contracts and other paperwork in the file boxes. Dragon a long ago gift from Lisette. 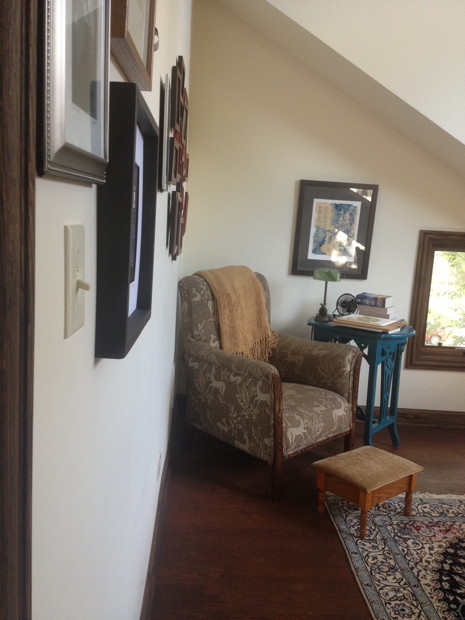 I write more in the chair than at the desk; it tucks in pretty well to the space. So here's the question -- should I add some color to the triangular wall behind it? I am seriously tempted to stamp or stencil, along these lines. 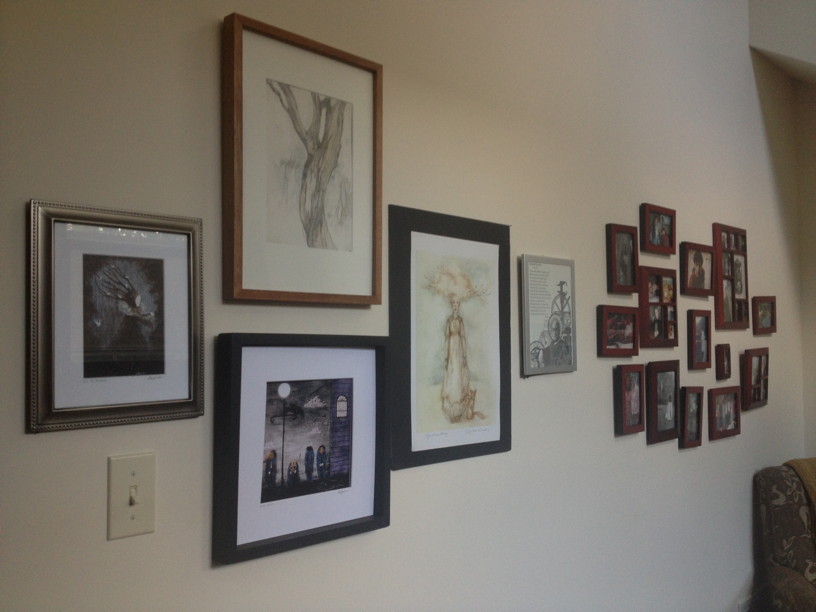 Artwork (Lisa Snelling, Katie Roberts, Terri Windling, and a John M. Ford poem ("Against Entropy") letterpress-printed by Steven Schwartz. Photos of old friends (the family photos are on the main stairwell -- this bit is just for me). I need to actually frame that Terri Windling print; hopefully this week. 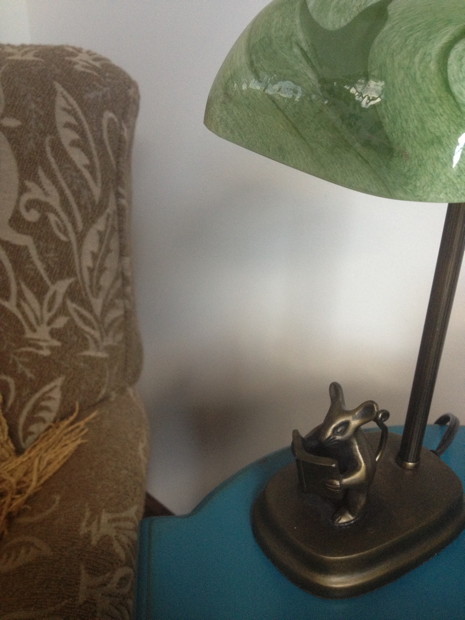 Little mousie. :-) Sometimes I like to read in here at night with just this light on. 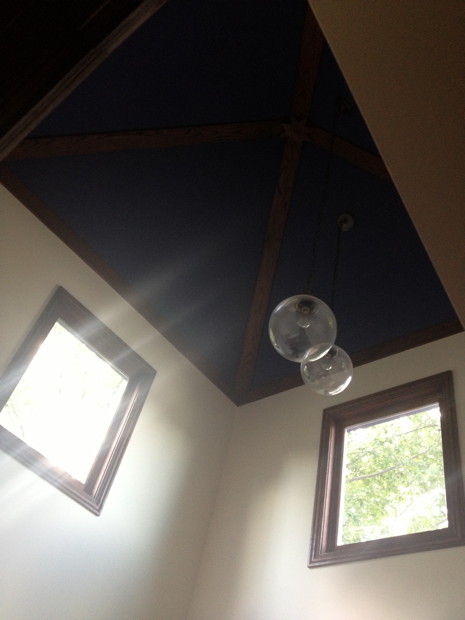 It's very hard to photograph this space! But the walls go up, as you can see. Tons of light. 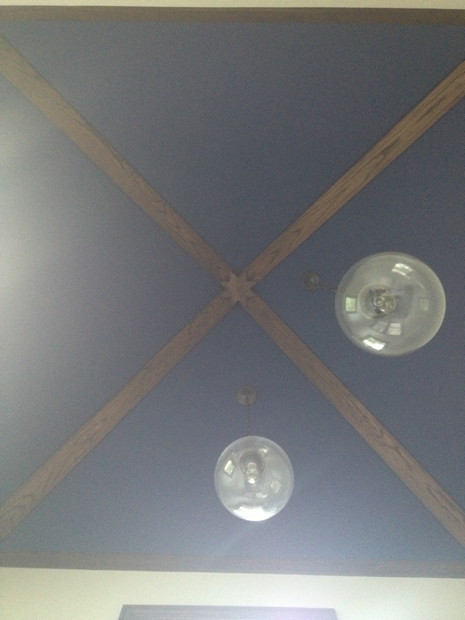 I wanted a star in the ceiling. This is the view from my desk, if you look straight up. The glass globes are lit with those old-fashioned filament bulbs, which will probably be illegal sometime soon. At some point, I may paint little metallic silver stars on the field of blue. Or not. I waffle. 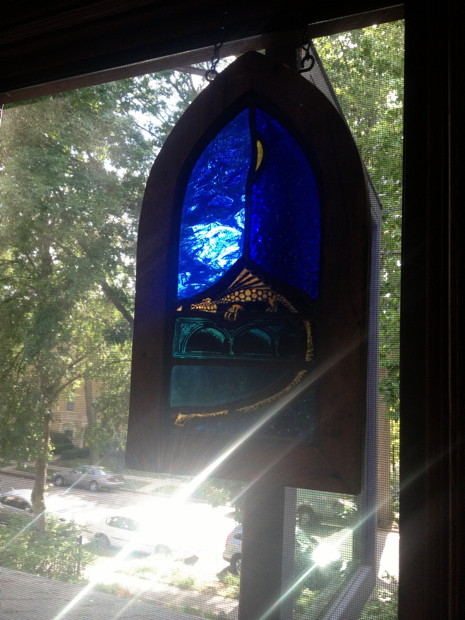 I just wanted you to see my little dragon. 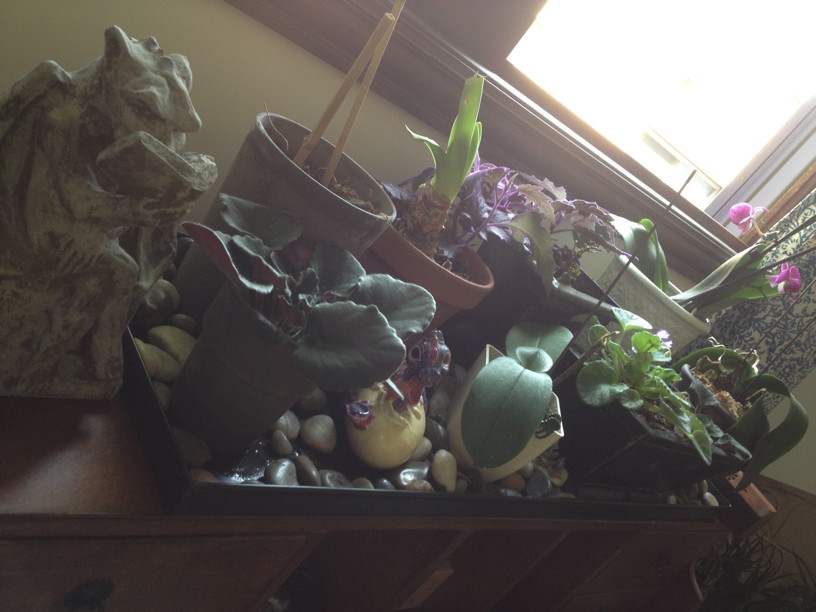 Gargoyle from the University of Chicago. This is where my orchids retire -- so far, two of them have come back to bloom again. Kevin hand-painted that little dragon for me, years and years ago. Three -- three dragons in this room. At least. :-)