Menu
All the political stuff is making my head hurt. I'm going to go watch West Wing re-runs and clean my basement for the rest of the morning, I think; taking out the trash will be satisfying. But in the meantime, here's some pretty to gaze at instead of obsessing over the news -- our new fireplace tile. 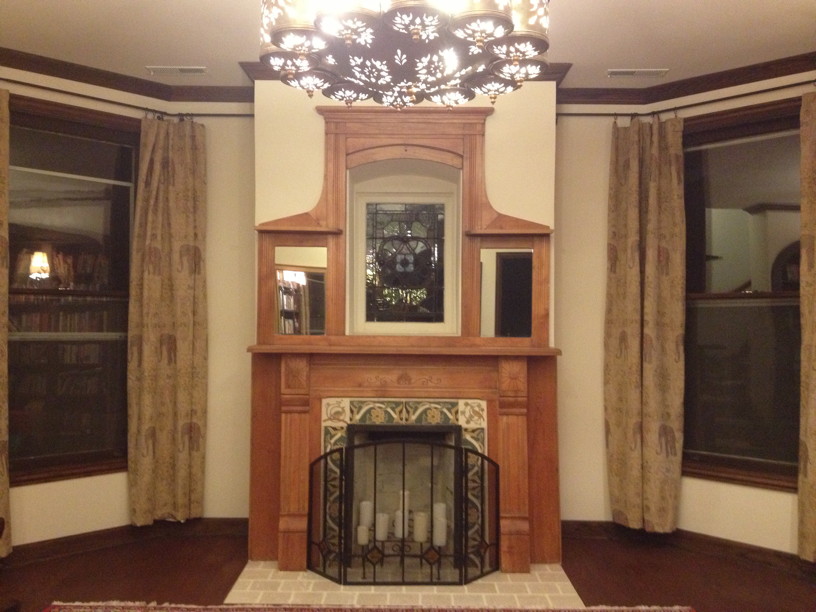 The old hearth was destroyed in the renovation process (and pretty battered to begin with), so we've just had some pine planks in there for two years now. It didn't matter much, because we can't actually make these into functional fireplaces -- they were originally designed for coal-burning, which is now illegal, and are very shallow. Even to put a gas insert in there (to code) would be a biggish project, and to make them wood-burning, we'd have to majorly expand the whole chimney. It's a thing. Maybe someday, if I sell a book to a big press and we already have the kids' college funds set up. For now, they're purely decorative, although I do sometimes light the candles in there. 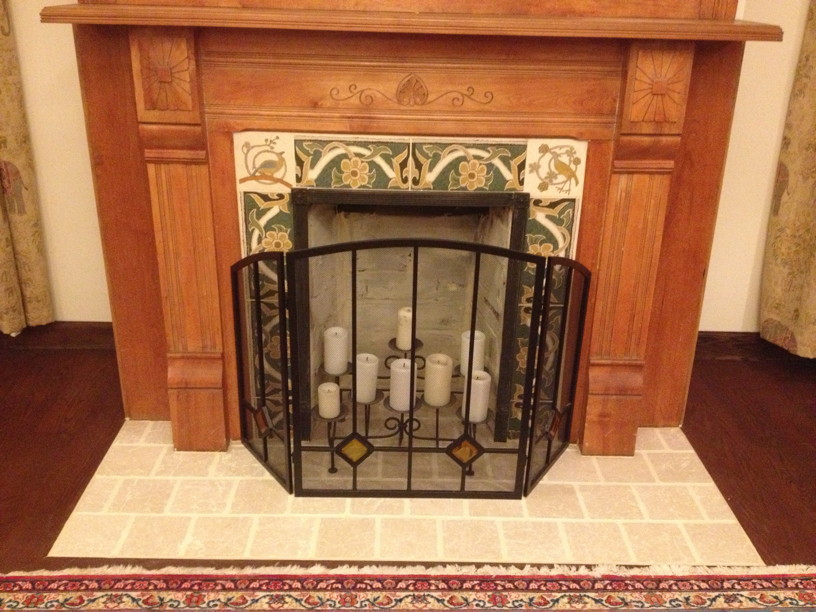 So anyway, the pine was ugly, and we always planned to fix it up. I also kind of hated the surround tile (a dark reddish brown with sort of rough leaves embedded in it) that was in there, although I was alone in this -- Kevin didn't mind it, and Pam (our contractor) actively liked it. De gustibus non est disputandum. It drove me nuts, so we took it out and redid it all, in the process also putting a light wash of white paint on the blackened bricks. Not covering them solidly, though, because we liked having some of the brick show through -- sort of a nod to the time when this fireplace actually worked, and the family would fill it with coals and huddle around it in the chill of Chicago winter. 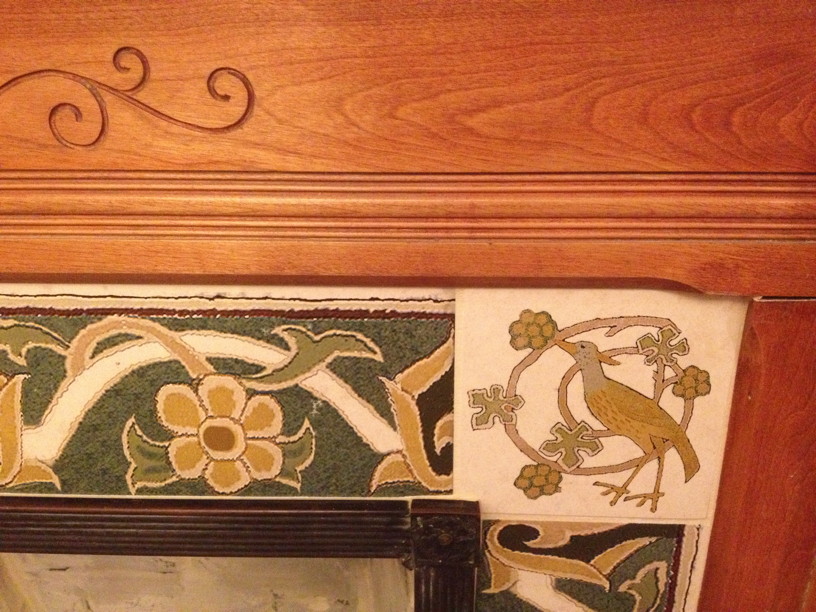 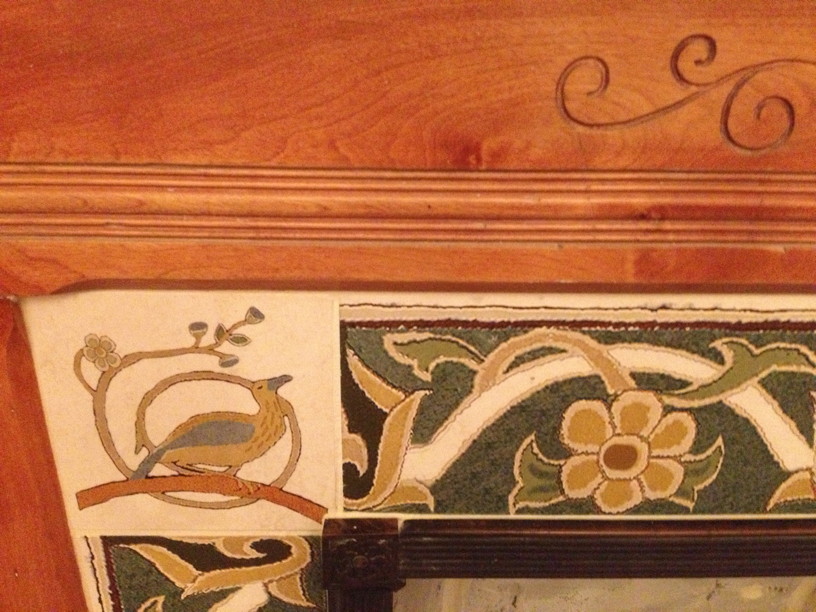 The tile is plain limestone on the hearth, and Stone Impressions Clermont collection on the surround. Stone Impressions makes a lot of gorgeous tile. I particularly like the Cathedral tile (very Gothic) and the Linda Vista and Eden (both of which look very desi to my eyes), and if I had an excuse I would use all three of those somewhere in my house. But Clermont seemed best suited for this room, between the original stained glass and the rug, and I totally fell in love with the little bird corner motifs. Totally adorable. (It comes in a few different colorways.) 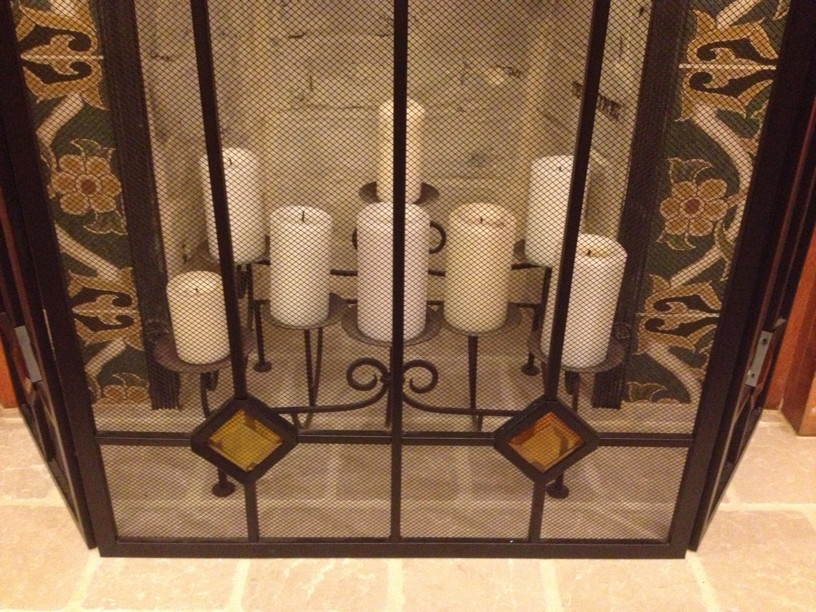 I enjoy the way the curves and winding vines in the listellos (the rectangular pieces) echo both the curves in the stained glass above and the winding vines in the rug below, and even in the curved bit of carving on the wood mantel. I know lot of you wouldn't even notice or care about that kind of detail, but this is the sort of thing that makes me really happy. The whole effect is a bit bright and light, which worried me when it initially went in, but after we've lived with it for a while, I think it works, and is a good counter to the dark wood trim and floor, and the dark red wall backing on the bookcases. (And of course, it's brand new now; I expect it'll darken a bit with time.) I took these photos at night, so you can't see how the sunlight comes through the stained glass, but the colors of the room are all reds and golds with a bit of cream and green and I think it really works. 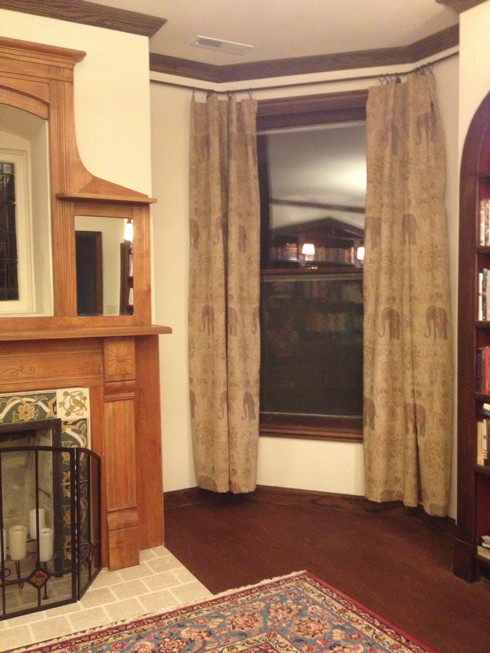 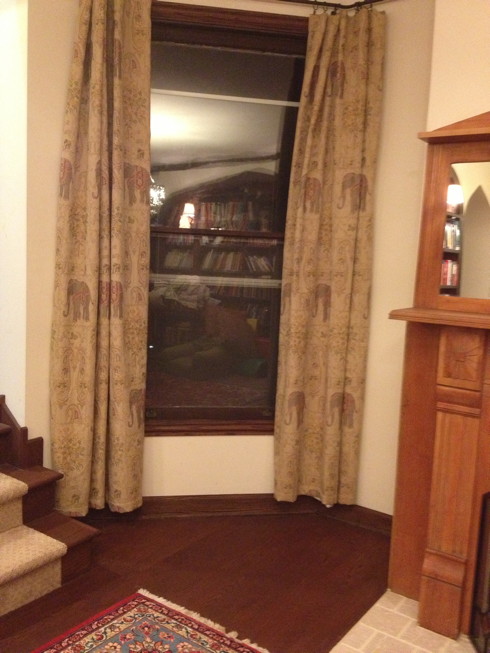 Any opinion on whether we should try to build in window seats in the two flanking windows? I'd have to hem the curtains up, but that's totally do-able. Kev's concerned that a) they'd need to be pretty shallow seats, given the space available, and b) you'd end up leaning against the curtains, perhaps. I concede the points, but argue that extra seating for kids is still helpful, and we could make them storage window seats and throw some blankets and such in there, at least, even if they're too shallow for storing board games, and that it'll just look better to have some dark wood window seats connecting visually with the built-in bookcases we put in. Of course, they would not be free, so it's a trade-off between cost and utility. We could just put some comfy armchairs in those windows and call it done. Thoughts?

3 thoughts on “All the political stuff…”