Facebook Instagram Youtube Twitter Patreon Shopping-bag
Menu
I promised you a photo of the new redbud, so here 'tis. Yes, this is the tree I bought over the internet, and yes, that still weirds me out. (From iTrees.com). I asked the tree folks why the old one died; they couldn't say for sure, but one thing they noticed when they dug the old one out was that the soil around it was bright red, which meant it had come to me from Tennessee or thereabouts. (Maybe they said Oklahoma? I can't quite remember.) The point being, it wasn't locally-grown, and that was common for trees from Home Depot and other places, but that it might have meant it had a harder time adapting to this environment. Also, of course, we had a drought-ish year last year and a lot of folks lost trees, so it could just be that. But anyway, thought it was worth passing along.

Since the old tree was small, they were willing (for a fee) to take it out, and then planted the new tree in a new hole a few feet away (so I could get a little more sun for flowers in the yard). The new tree is a clumping form, which is taking a little while to get used to, but I think it's going to be good. It helps balance the composition of the yard, having a nice tall element for everything else to play off of. So I think we're good, and I'm looking forward to next spring, when it will be covered in tiny pink blooms. Yay, tree! 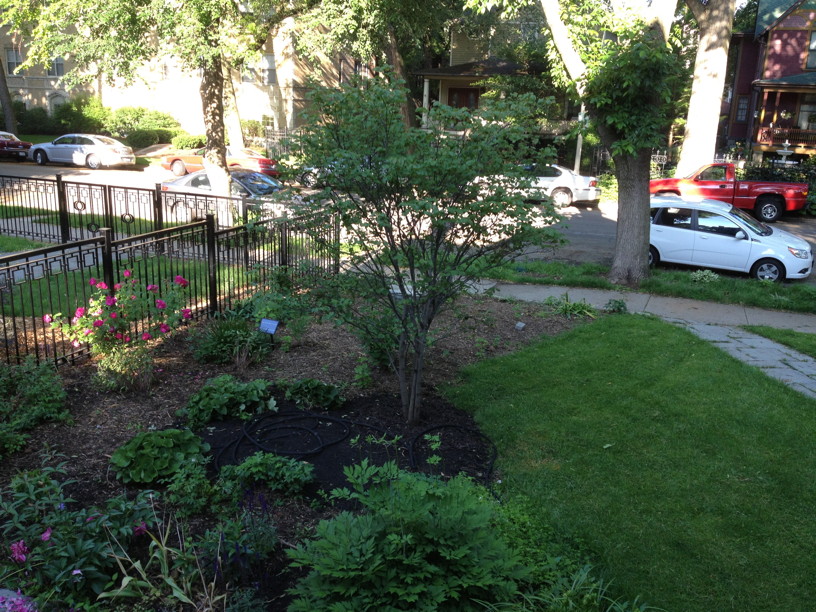