Menu
When Kulvinder﻿ and Toni﻿ were over for writing yesterday, I was reminded that people are sometimes over-impressed with the neatness of my house. I actually dragged both of them over (at different times, when they commented on said neatness) to expose one of my secret shames, the mudroom. 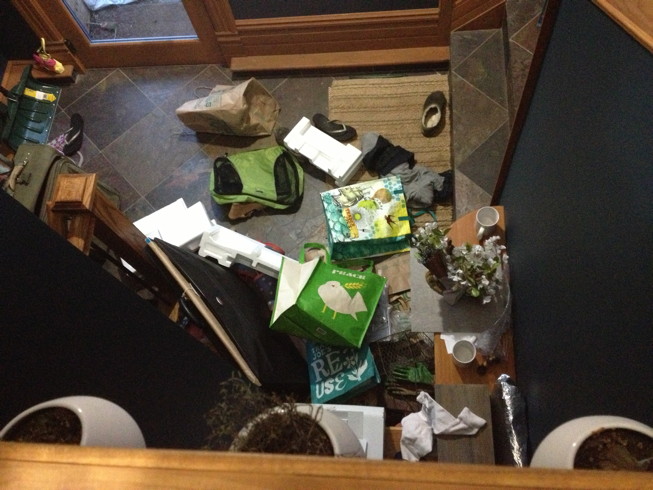 Now, it's lovely to have a mudroom. It's convenient that one can drop non-breakable things over the side from the kitchen into the mudroom, given that one is often too lazy to walk down the flight of stairs to either take things out to the trash or down another few steps to the basement. But as our contractor exclaims in some dismay every time she comes over (she is a neat and tidy person by nature) -- "What can we do to keep you guys from doing this?" I suspect the answer is "Nothing."

At this point, it gets cleaned out over month or so, when I get tired of tripping over stuff on my way in and out. Today will be another clear-the-mudroom day. Maybe someday we will stop being lazy people and stop throwing things over the side. I am already trying not to do it when the children are around, because Anand is a little too fond of hurling his rainboots over the side, and he doesn't actually check to make sure he isn't going to break anything on the way down. It's a process.

6:40 update: What's actually saddest is that it just took literally ten minutes to clean it up. Ten minutes vs. a month of stepping over/around things. Sigh.

2 thoughts on “When Kulvinder﻿…”