Menu
Report back on recipe from Melissa Joulwan's _Well Fed_ (paleo cookbook). I used soy sauce instead of the coconut amino stuff (because I'm not trying to avoid gluten / soy), but otherwise followed her chicken recipe, and it was good; I think the brining did help keep the chicken breast nice and moist. If I happen to be home two hours before dinnertime and have five minutes to make the brine, it seems a worthwhile step. The Indian flavors on the chicken were good, with a bit of spice.

We also made (well, Kevin did) her Moroccan lemon-garlic-herb sauce, which I liked a lot -- it was great over avocado and cucumber as well. I wasn't super-hungry (due to mid-afternoon snacking), but if I had been, we would have steamed some broccoli to add to the plate, and I think it would have also been great with the sauce, adding a slightly sweet note, as well as filling out the meal. I don't think I'd miss starch in this meal. 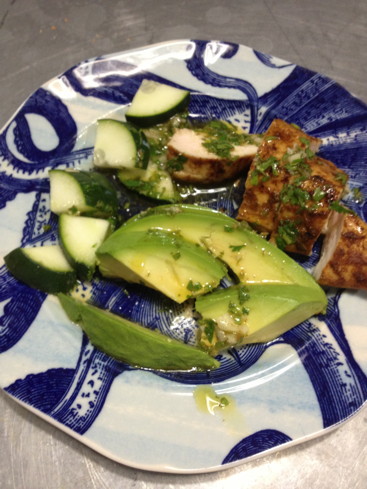