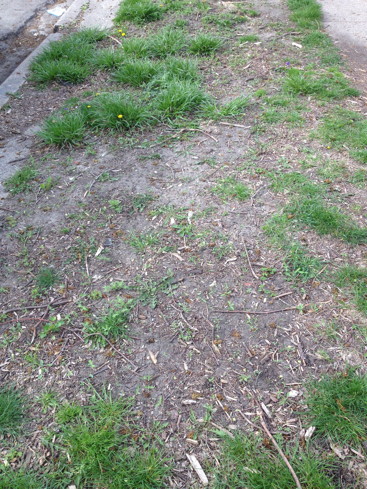 This is part of our hellstrip. That's the stretch of land between the sidewalk and the road, which technically belongs to the city, but which homeowners can often plant on (and which I think we're expected to keep mowed), as long as we accept that the city can destroy our plantings at any time. It's called the hellstrip because it's hard to garden on -- people walk across it to get to their cars, dog pee there, it gets a lot of car exhaust, etc. 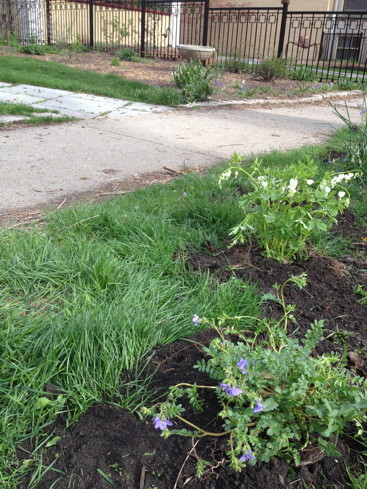 On the other side of the sidewalk, my woodland garden plants seem to be surviving the passing dogs, and it's heavily shaded in the strip, so I decided to try sticking with the woodland approach. Pictured here, Jacob's ladder (blue-flowering) and bleeding heart (white-flowering). The latter also comes in pink and red, but I'm sticking to blues, greens and whites in the hellstrip, at least for now. Cooling, to counter the whole hell thing. :-) 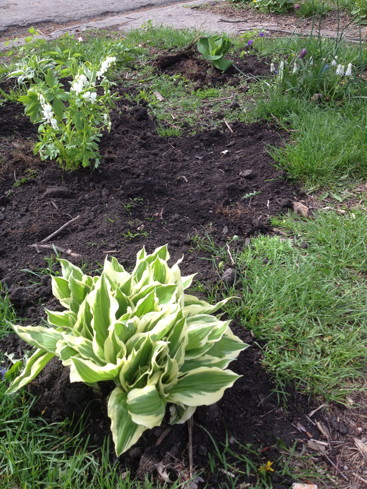 More bleeding heart at top left, a striped hosta in front (sorry, didn't write down the names), a blue-green hosta at the far back top, and top right corner, you can probably make out some white muscari. I'm not sure what I want to do with all the leftover patchy grass. Cover it with mulch, I suspect; long-term, I'd like this to be pretty covered in perennials and bulbs, so grass is just going to get in the way and be hard to mow. 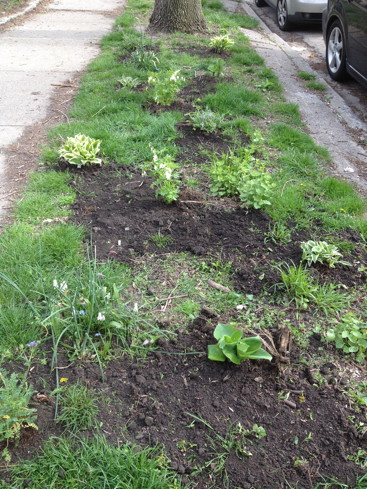 Here are all the new plants in the ground; I know, it's a bit hard to tell where everything is. 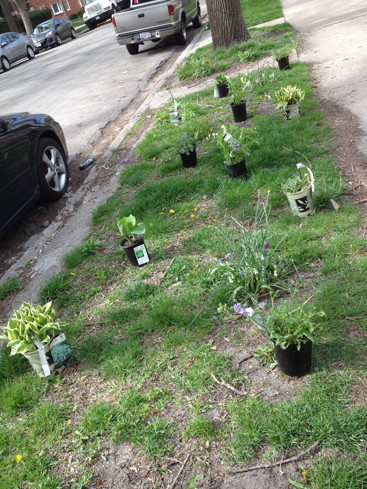 This is an earlier pic of them still in their pots, which at least gives you an idea of layout. Plant cost was about $200 total, for anyone who's thinking of doing something similar. This is the big addition to the garden this year; mostly, I'm trying to keep the rest of the yard on a fairly strict budget, hoping all the bulbs and perennials from last year come back. Maybe someday I'll have enough budget to buy a ton of annuals to add bright spots of color to my mature perennial garden. Of course, by the time that happens, I may be too old and creaky to bend over and plant them all... 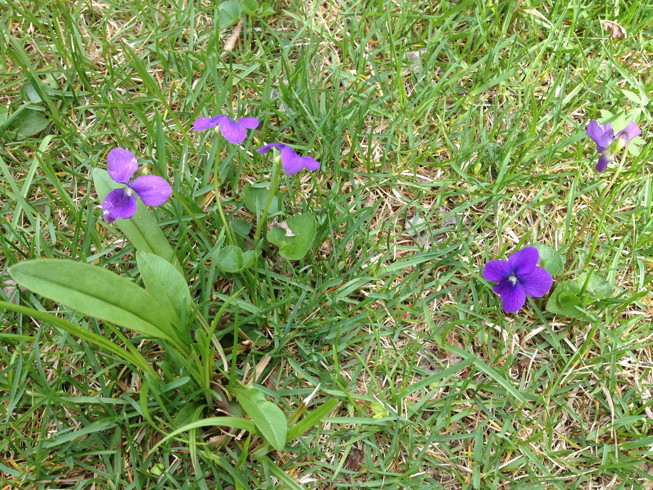 Little volunteer flowers in the grass -- are these violets? I loves them. 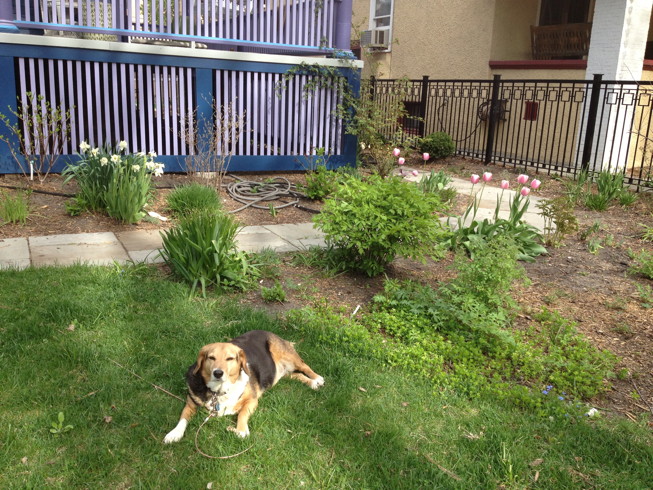 Elinor, queen of all she surveys. Mt. Hood daffodils still going strong in the back, with Ollioules tulips flanking the path as it turns the corner. I really like them; simple and elegant and sweet. 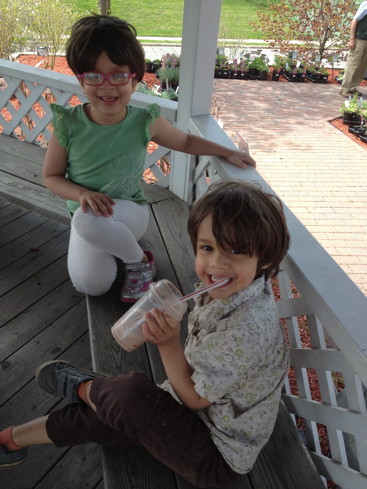 The kids always have a blast at the garden store (Luurs, in Hillside), though it can be difficult to keep them under control. I'm not sure the chocolate shakes actually helped with that. Sugar rush. 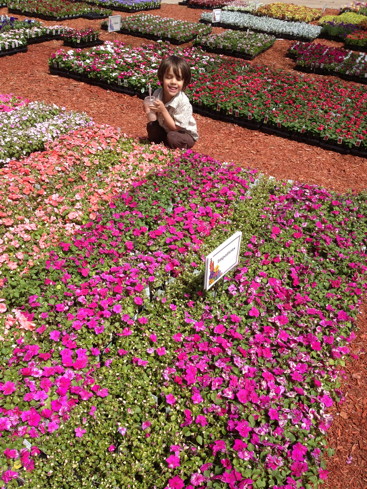 Anand is very fond of flowers. 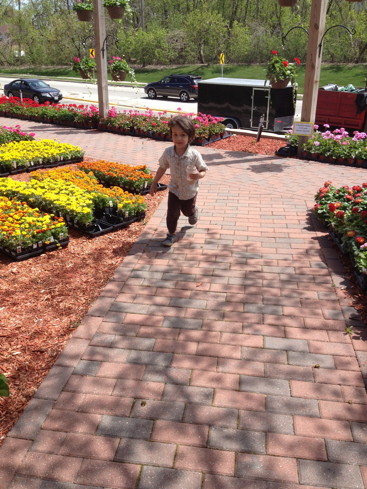 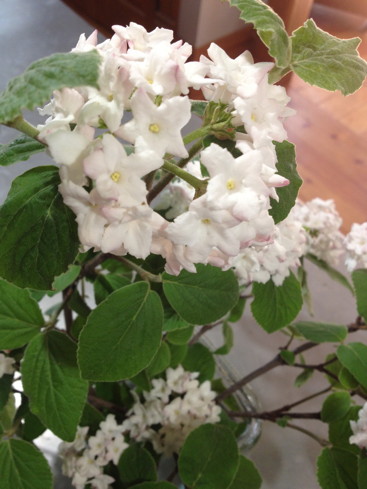 I cut some viburnum from the blooming shrub; one side was growing a bit high for shapeliness, which was my excuse. 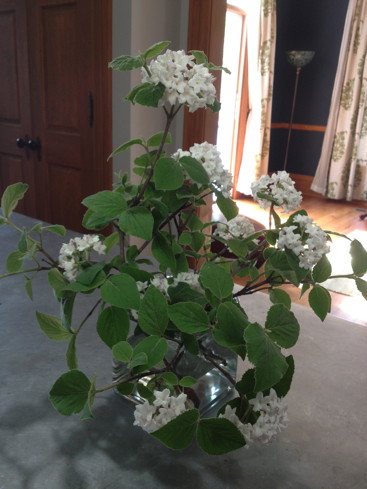 I like how branches are so interesting that you basically don't have to arrange them -- just stick 'em in a vase and let 'em go nuts. 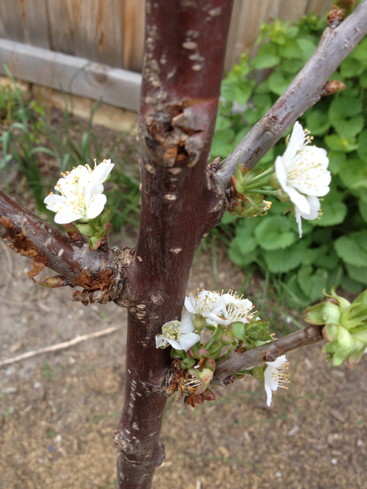 We got some fruit trees to espalier (in theory) last fall -- they're blooming now. I think this is cherry. I'm really not sure what I'm supposed to do next; I have to look it up. The whole espalier concept appeals to me (more fruit in a smaller space and it looks cool too), but the process is intimidating as hell. 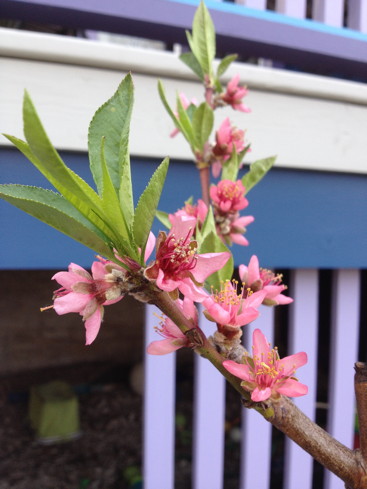 Peach tree, also to espalier, this one as a triple cordon, I think. Maybe? 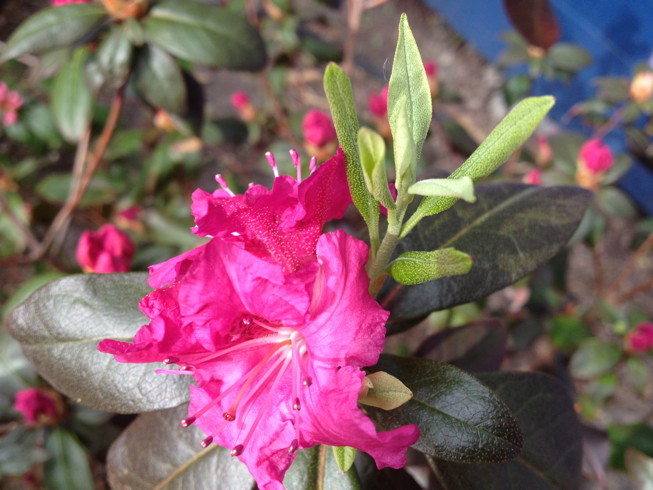 I can never remember the difference between the two, but I think this is my azalea, not my dwarf rhododendron.