Facebook Instagram Youtube Twitter Patreon Shopping-bag
Menu
Week two of Katie's art class, and she challenged us to make a mess. I hope she doesn't mind my posting this here, with my comments -- I think mess-making is a reasonably common art class assignment. But I found her instructions and little videos really helpful in approaching it, and I totally think she's undercharging for her classes. (I'm taking advantage of that pricing now, so I'm grateful, but I'm going to advise her to bump up the price next time around!) I'll make notes on materials I used and my thoughts on the process on the photos individually.

Started with a few pencils of varying weights. 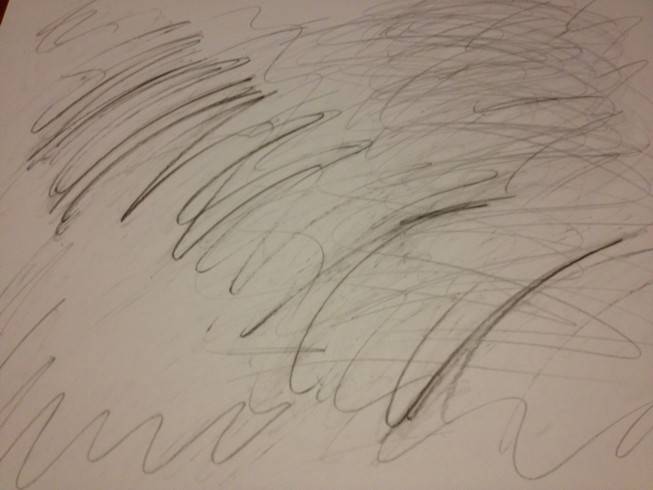 Added charcoal sticks and used stumps and tortillion (that came with the basic set -- I hadn't heard of them before) for smudging. Really liked the smudging part; fun new technique with satisfying results. 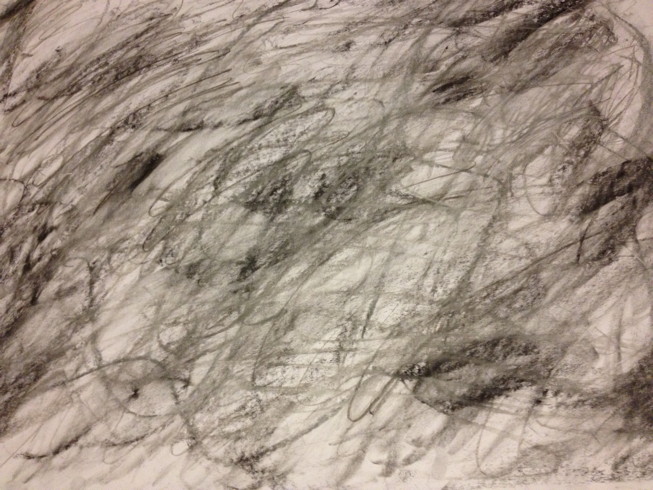 Added some umber / brown charcoals, part of a set I had. Not my typical color scheme, but might be useful for trying to sketch bodies / faces? I'm not sure why the charcoals came in that color palette as a default. 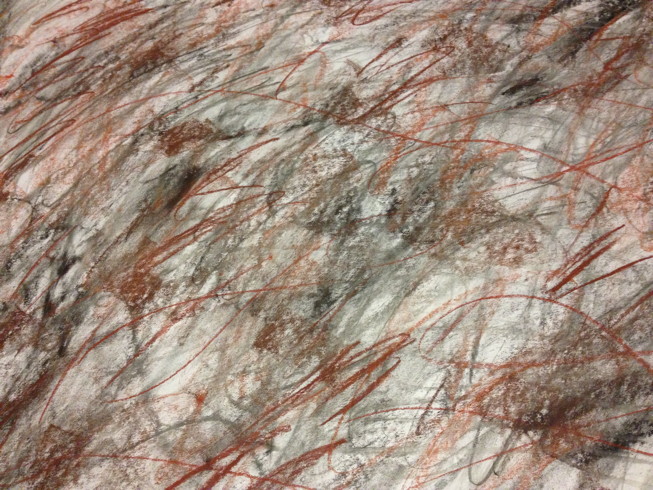 Just the bigger version, I think. I did a bit of erasing with the kneadable eraser, around now, but didn't find it so satisfying for this part. 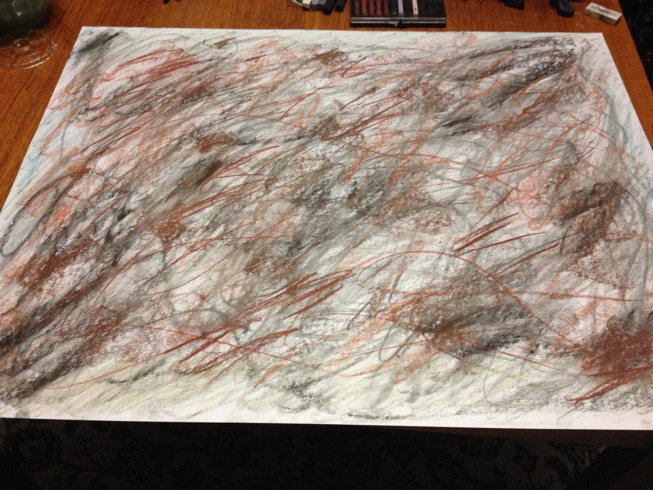 Tried to add watercolors, first with watercolor pencils, then with watercolors and a brush, in various shades of green. Hm. Was a bit frustrated by how muddy and dark the watercolors got whenever they encountered the dark charcoal. But interesting. 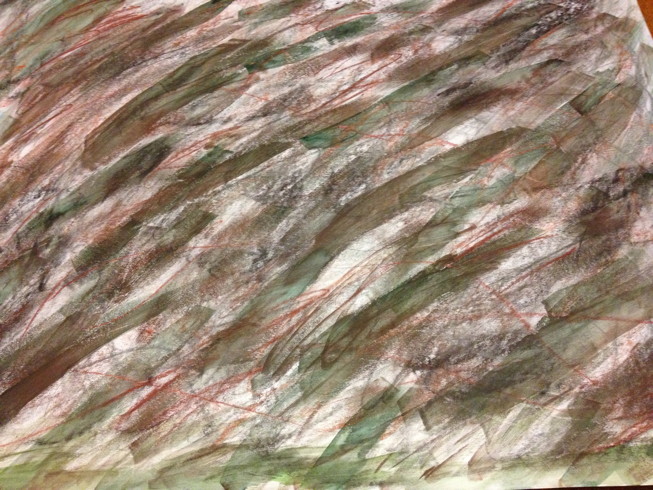 And a big jump here, to add acrylics. As expected, much of the subtlety underneath was lost! But a bit shone through here and there. I really liked putting on a bit too much paint and then scraping it up with a plastic spatula -- also, making sharp lines with the edge of the spatula. Fun. :-) 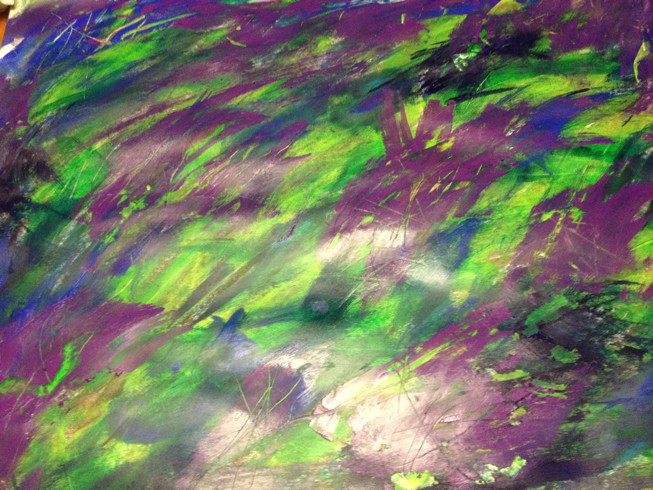 Oops, skipped a couple steps of documentation. Let's see -- first I mixed some irisdecent white with structure gel, to try to add some texture to the piece. It didn't do much, and the white was very gloppy and kind of overwhelming. I tried adding silver, because I'm a little obsessed with shiny things, and I liked that, but it was a bit overwhelming. I think I blotted some up with a sponge (I did that a lot with the acrylics before too) and also tried a paper towel. And then I scattered a bunch of sand on it, and then scraped that around some. At this point, this is all looking pretty chaotic to me. Not loving it. Although I'll admit it has energy. :-) 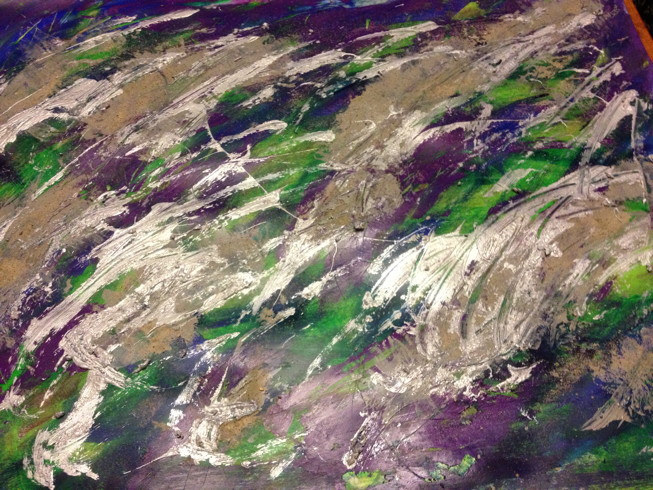 More scraping! Lots and lots of scraping with the plastic palette tool, and I'm a lot happier with it now, though perhaps I did a bit too much scraping, since it got sort of uniform. 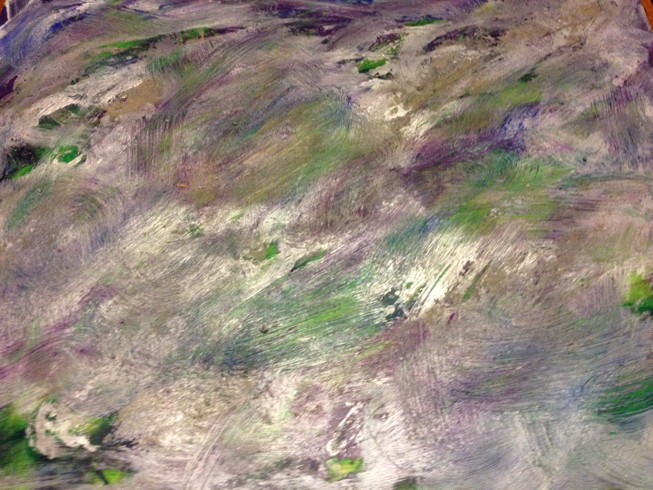 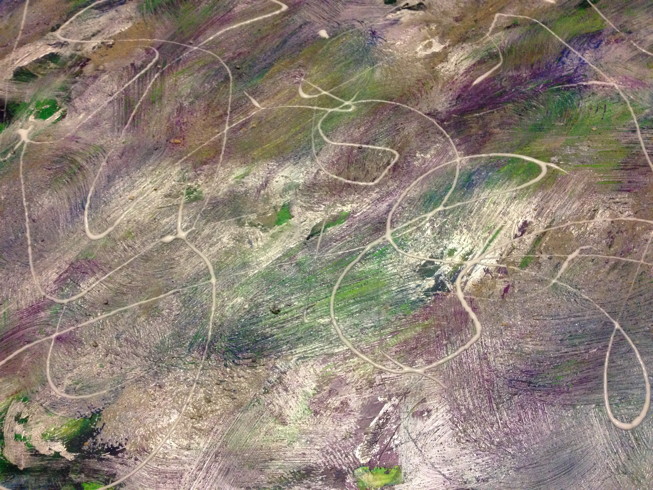 I had a bunch of dried flowers and leaves from earlier collage projects, so I tried adding them. Didn't love the effect overall, but some of the sections look sort of interesting. 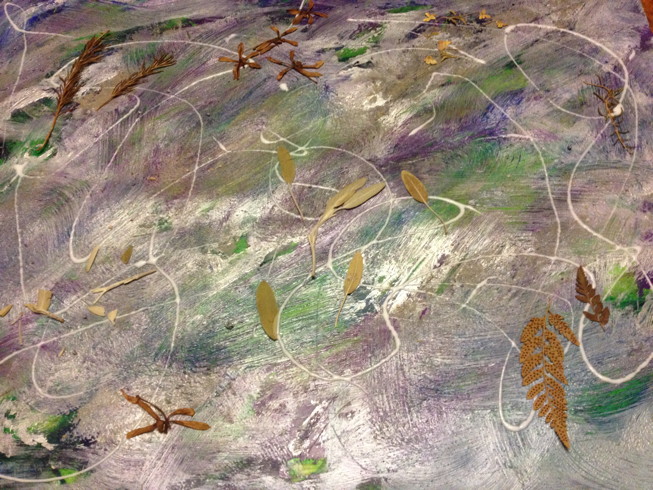 Let it dry overnight, and the white glue disappeared, of course, although still adding a bit of texture to the piece. Sorry this pic is blurry. 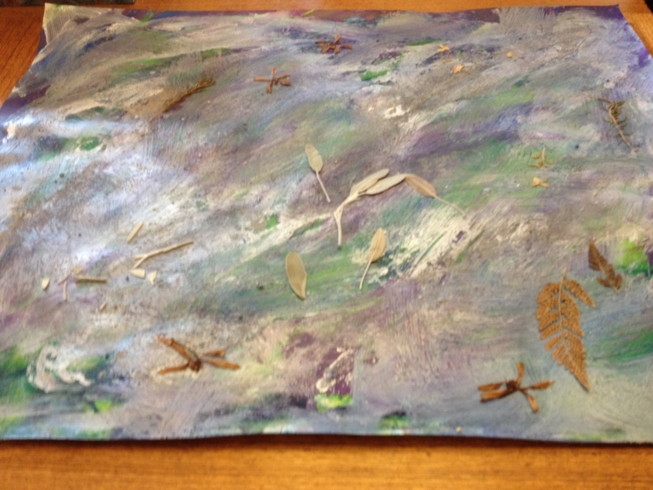 But I kind of love the finished result, in spots. Somehow the final result looks sort of space-like to me. Nebulae and such. Kind of crossed with spring, since those were the colors I was working with. 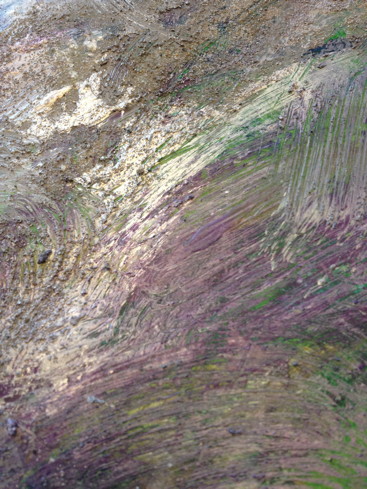 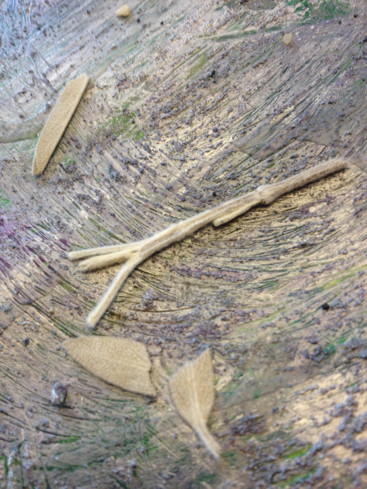 I like the strange juxtaposition of the futuristic and the archaic botany here. 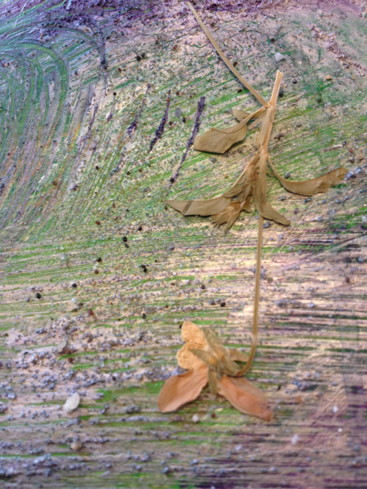 Hm. Maybe a bit unsubtle, those bold pops of green. 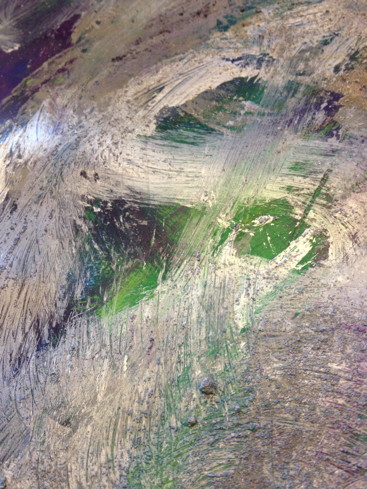 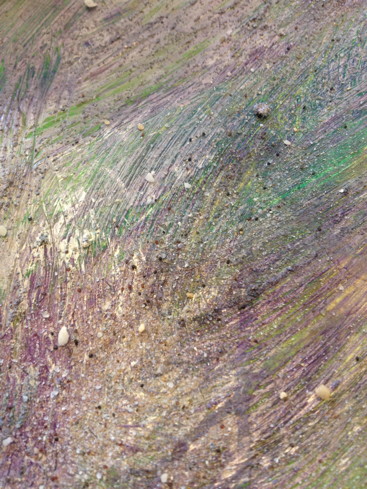 Floating on a stream of sandy silver water. 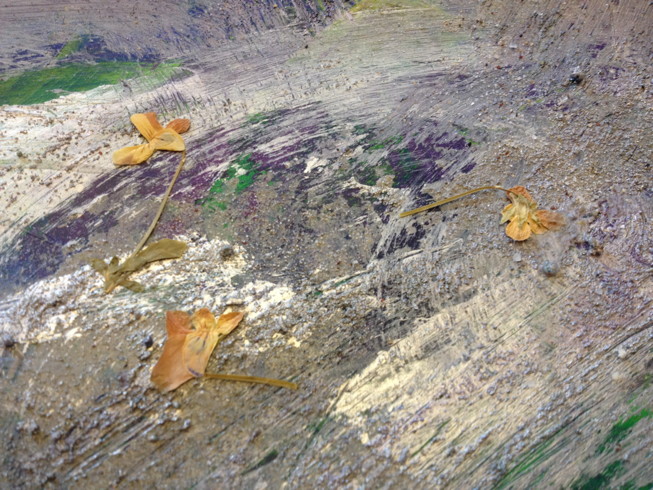 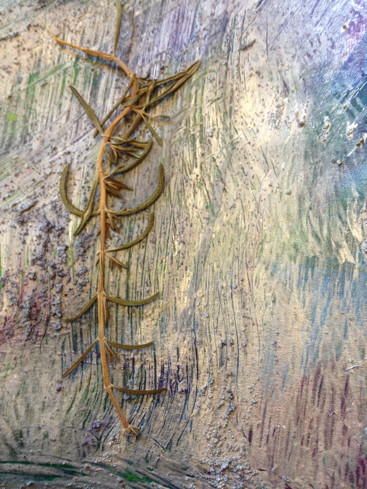