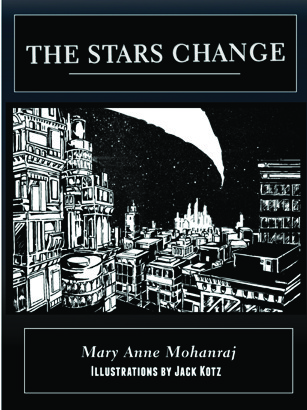 What is the title of your book?

What is the one-sentence synopsis of your book?

On a University planet settled by South Asians, people learn that the first interstellar war, humans against aliens, has just been declared; many take to their beds, while others take to the streets.

What genre does your book fall under?

Where did the idea come from for the book?

How long did it take you to write the first draft of the manuscript?

Who or what inspired you to write this book?

The desire to do a light, fun project, the sort of quirky thing that might work as a Kickstarter project. And the fact that people seemed to really love �Jump Space,� a story about a threesome-turned-foursome-with-alien, set in the same universe. Somehow I didn�t realize that if I started writing a war story, it wasn�t likely to stay quite as light as I�d planned.

Will your book be self-published or represented by an agency?

The Stars Change was originally funded as a Kickstarter self-published project, through the generous donations of 168 backers who raised a little over $8000 dollars, my target budget. It was recently picked up by Circlet Press, and will be finally published by them in Summer 2013. So I�d call it a joint effort.

What other works would you compare this book to within your genre?

Lois McMaster Bujold�s Miles Vorkosigan books. Marguerite Duras, The Lover, The War. It�s actually not much like any of those, but it�s not much like anything I can think of. Something new, perhaps.

What actors would you choose to play the part of your characters in a movie rendition?

For the two female romantic leads; I need someone who could plausibly have been genetically modified to be very beautiful, and someone else who is more typically pretty, both South Asian. Aishwarya Rai and Parminder Nagra would be splendid. For my sturdy saurian policeman, Huge Jackman, perhaps? And do you think Emma Thompson would have any interest in playing a feline hotshot programmer? Honestly, I would rewrite the book to create a part for her if necessary.

What else about your book might pique the reader�s interest?

It is not quite a novel, at a little under 40,000 words, so you could read it very fast! And the print editions will be very limited (to 100 (hc) and 250 copies (pb)), so if this intrigues you, you may want to pre-order it here: http://www.mamohanraj.com/kickstarter.html

My turn to tag five authors I'd love to read more from -- tell us about your next book! Amal el-Mohtar, Benjamin Rosenbaum, David Moles, N.K. Jemisin, Jed Hartman!