Facebook Instagram Youtube Twitter Patreon Shopping-bag
Menu
ICFA, day two: working, resting, socializing. I hung out in the restauarant cafe in the morning and worked, taking a break partway through to carry my tea over to where Andy and Sydney Duncan, Joe and Gay Haldeman, and Peter Straub were having breakfast. That was lovely. I hadn't met Peter before, and apparently I have been misinformed in my picture of him as a more strongly genre horror writer. I am scared of gore; it gives me nightmares. He says his more recent work is in a more literary vein (okay, he didn't say those exact words, but I'm pretty sure that's what he meant), and the torture happens off-stage. I might be able to cope with that, and he was so smart and funny that now I want to read his work. Hm.

I moved my work out to lakeside -- not a real lake, but a nonetheless lovely little pond-y thing the hotel has, with Spanish moss draping itself from the trees and sunlight glinting on the water. It was mid-70s, and though I stayed out of the sun so my computer screen would be visible, it was still tremendously satisfying just being able to hang out outside in reasonable comfort. More work, including churning through about a hundred e-mails (only 610 to go, sigh). 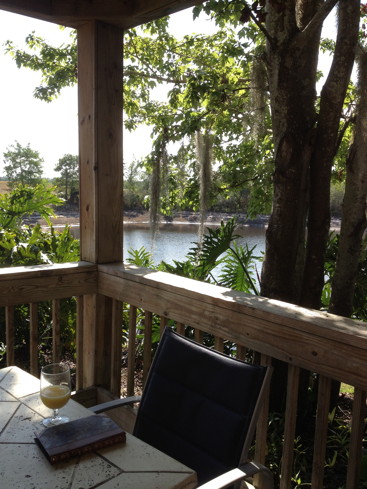 I was joined by Delia Sherman, who was working on a short story for her next collection, and eventually we toddled off for lunch, where we ran into Charles Vess. They talked a lot about art, and I nodded my head, because it turns out, I know very little. Wish I'd taken an art history class in high school or college; it'd be nice to have at least a vague idea of whom all these major figures are. Also, they go to museums a lot more often than I do. I like going to museums; maybe when the kids get older, I can make the time and bring them along.

More work after lunch, and then at some point I gave up. Changed into my suit, jumped in the pool, and swam. It was sort of difficult to swim laps, because the pool has all these ins and out and not much of a straight course. And I'm such a bad swimmer, I usually do laps on my back, which is fine in a normal pool, but here meant that I wasn't quite sure where I was going and bonked my head twice. Maybe this summer I will find some time to take a few swimming lessons and learn how to swim like a normal person. That would be nice. But it still felt great being in the water. Apparently mid-70s is too cold for a lot of people; the pool was relatively empty. But I thought it was just fine. Came out after a while, read a bit, then joined a group of academic women who were chatting; the only one I knew well was Kij, but they all seemed lovely.

Change back, a bit more work in the hotel room, and then I went off to try to attend a reading by some friends, but I was waylaid in the halls by Mari Ness, whom I don't think I've ever met in person, but I bought and published a story from her, lo, these many years ago, for one of my first erotica anthologies -- oh, I can't even remember the name of the anthology. Hope I have a record somewhere. But it was great to finally meet her in person, along with Shaun Duke (who interviewed me for the Skiffy / Fanty show), and a young woman whose name I'm blanking on, but who was also entering the Ph.D. program at University of Florida where Shaun is already. Nice chat, swing through the book room, sit in the hallway and do a bit more work, and then dinnertime.

Found Jed and Keffy for dinner, had a great conversation, a bit about my vague idea for a breast-reduction-surgery SF story, a bit more about trans stuff, and then Mari joined us for dessert, and we talked about science and marine biology and aquariums we have loved (I remain a devotee of the Monterey Bay Aquarium: manta ray petting pool, shimmering sardine circle, jellyfish, seahorses, and leaf dragons galore). We also split a dessert, and I'll tell you, when you've mostly skipped dessert for two months, when you do have some, it's glorious. That was also the name of the dessert, a Knickerbocker Glory, essentially a sundae in a very tall dish, served with long spoons. Splitting it four ways was about as much as we could handle. We're getting old. :-) 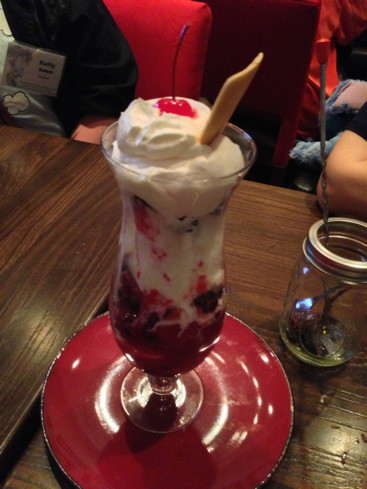 On our way out, Jed and I ran into Sheila Williams, her daughter, and daughter's friend. The latter two (college-age) swiftly departed, once it was clear that mom was taken care of, and we settled in for a nice, long chat. Jed went off to a reading at 8:30, but Sheila and I stayed and talked 'til 10, a great mix of parenting woes (it turns out that we have very similar attitudes towards parenting and the misery of the baby years) and discussion of the various race/gender/etc. fails in the community in the last several years. We also have a pretty similar attitude on those, modulated a bit by differences in age and position. Mostly, we hate it when the internet falls on people in an indiscriminate and brutal heap. As editor of Asimov's, she has to think about this a lot more than I do, since her authors sometimes get slammed, and it was just all very interesting. I've never really had the chance to have a long conversation with her, and it was splendid. She's awesome.

At 10-ish, wandered out for a poolside reading from Ellen Datlow's new anthology; it was a little hard to hear and someone was smoking a pipe close enough that the smoke was annoying, so I eventually gave up. Brief, funny conversation with Helen Pilinovsky and Stefan Ekman, which somehow centered on Dr. Who sex toys and it just got worse from there, ending with a wibbly-wobbly luminescent glowing absinthe Victorian jello, with optional vibrators. I blame Stefan. See for yourself!

And then a few more minutes of enjoying the utter delight of being comfortably outside at past 10 p.m., a bit more chatting in the bar, and then back to the room to collapse, feeling good. It's snowing in Chicago tomorrow. I don't want to go home.