Facebook Instagram Youtube Twitter Patreon Shopping-bag
Menu
Oh my god, I SO went over on my talk time. I mean, the moderator gave me a warning, but I was so far from the end, I just raced through the rest of my slides, wildly skipping. Ah well. Sofia Samatar insists it was a good talk despite that. I think I would give it a B-, personally -- "promising ideas, student, but you REALLY need to work on your structure!"

Yesterday was a fairly intense academic day; attended a panel on fairy tales that was really fascinating, featuring all sorts of cool people, including Charles Vess, whom I haven't meet before (LOVE his work, and excited to hear that he has a new book out in collaboration with de Lint). Went back to my room after and worked on my talk, then met Jed for the GOH luncheon with Neil Gaiman and gazillion other people. We somehow were seated at what turned out to be the international table, with three people from Australia, two from Sweden, and two from Spain. I felt quite pedestrian by comparison! Fun times, good lunch, pleasant talk from Neil; nothing earth-shattering, but it's always nice to listen to him talk, and as I head into the final revision of The Stars Change, it felt good to be reassured that in the end, following the thread that interests you is generally the wisest choice.

Afterwards, more working on talk, then giving the talk, see above. My co-panelists were awesome and timely; at least they went first, so I didn't feel like I was cutting into their presentation time. I just tried to take on too much for twenty minutes, I think, esp. since I kept adding things at the last minute. Did I need that long side note about the ending of Kay's Fionavar Tapestry? Well, maybe, but then I should have cut something else. In the future, when I have a lot of long quotes, I'm going to just put them on the PowerPoint and not try to read them all out loud. My audience can read, after all.

Dinner was FABULOUS, with Sofia and Jed and Kij Johnson, joined towards the end by John Kessel and James Patrick Kelley. We started at 6, finished at 9:30, and covered a lot of territory in the interim! I got to decompress a bit about various writerly / academic stresses, and the trip may have been worth it for that alone. After that, went back to the room and collapsed in a heap, to sleep not quite eight hours. If I can just sleep a bit more while I'm here, that would be good. I could use it.

In other news, it's 75 degrees here, and I think my body is in shock. But in a good way. I'm sitting in the hotel restaurant now, watching the sun rise over the palm trees, lighting up the perfect clouds. My orange juice is freshly squeezed and delicious; lovely Alberto is bringing me milk for my tea even as we speak. I'm going to eat some breakfast while reading Rae Carson's The Girl of Fire and Thorns (intriguingly, the young female protagonist is fat -- it's shocking to me how shocking that is to me, chapter after chapter). Once I'm done eating, I'm planning to work on e-mail backlog for a few hours; I think the stress of being so far behind on it is part of what's interfering with my sleep lately. If that all goes well, I will reward myself with a swim and/or lounging by the pool this afternoon. Yes, I want to go to more panels, but I think not today. It's been so long since I had an actual vacation -- I think I need to take at least an afternoon off! 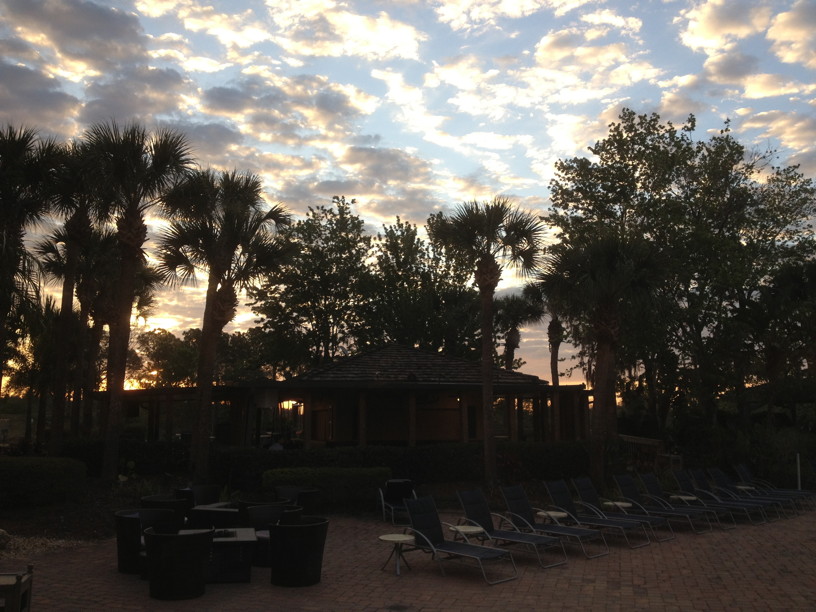