Some more of the photos Jed took of us, somewhat blurry, etc. 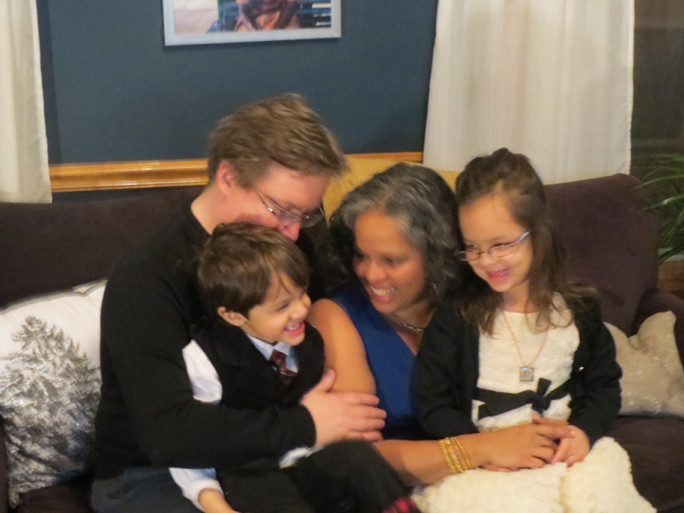 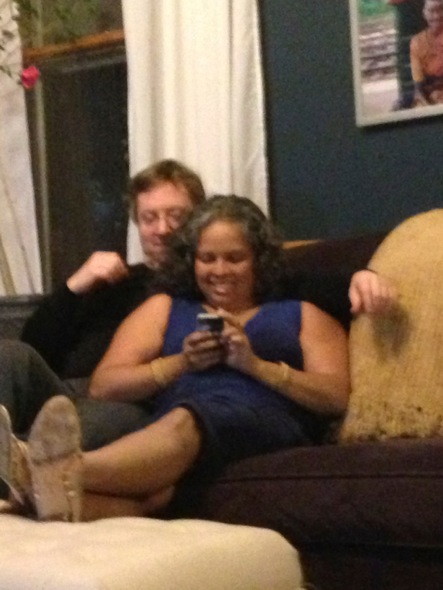 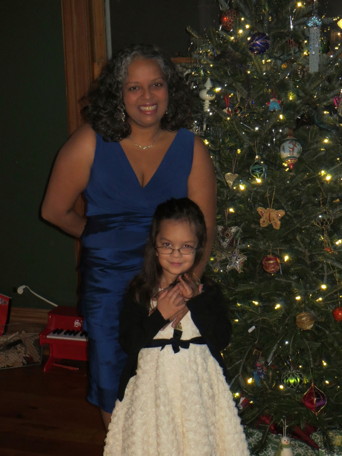 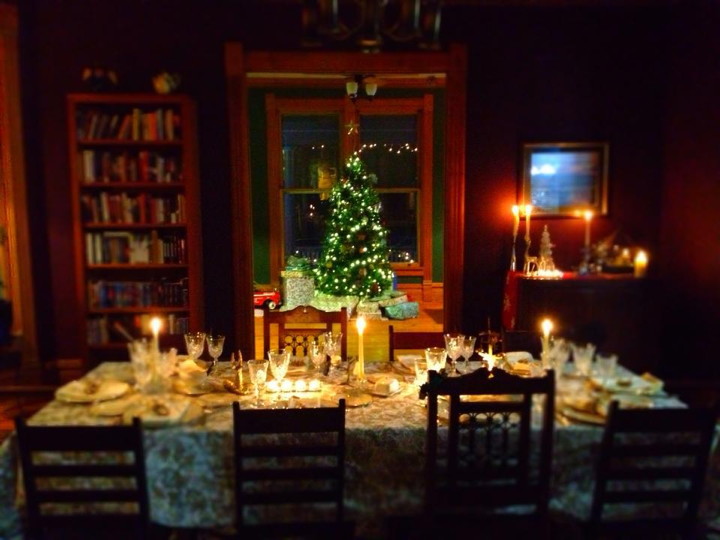 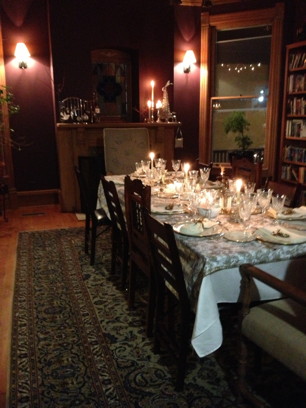 I love my little deer and candle forest, though it does eat up space where we might otherwise serve drinks. Hmm.... 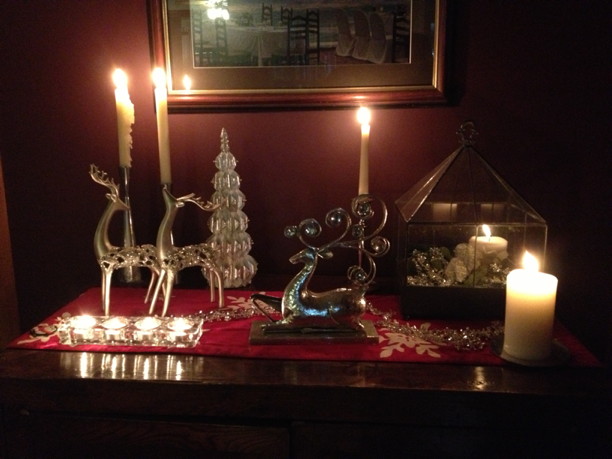 I need more excuses to haul out the china and crystal. We had rack of lamb with mint sauce and/or mango chutney, honey-glazed ham, crescent rolls, roasted veggies (potatoes, carrots and parsnips), brussels sprouts. Berry trifle and eggnog cheesecake bars for dessert. 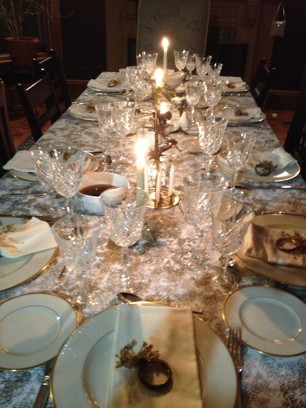 Stockings are filled on Christmas morning -- or actually, three days later, since we waited to celebrate with Kevin's parents when they arrived. But pretend it's Christmas. Thankfully, our kids are small enough that they didn't really notice. 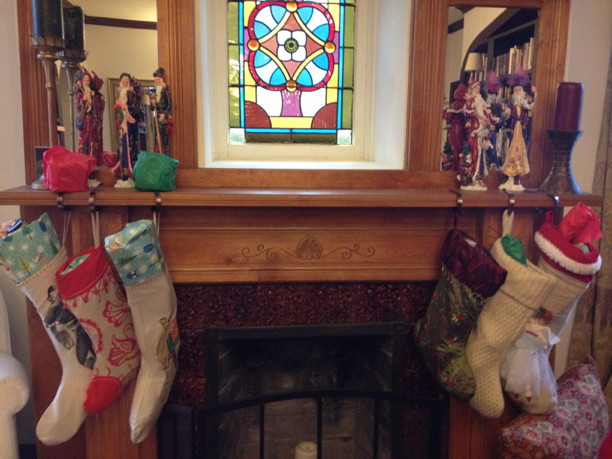 I was proud of them for waiting (impatiently) until everyone had their stocking. And then we went around in a circle, opening presents one by one. Anand actually waited his turn each time, which I think is very impressive for a three year old. 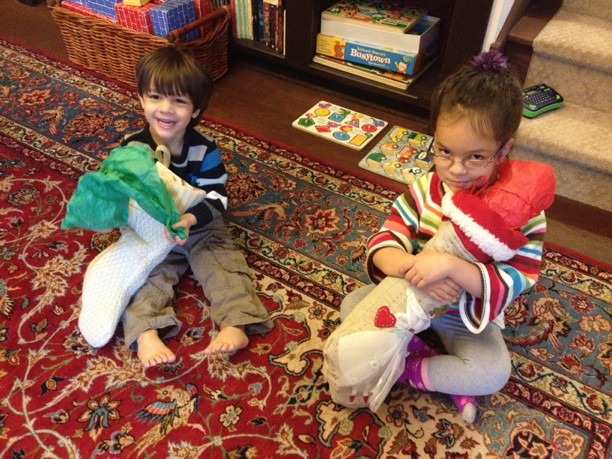 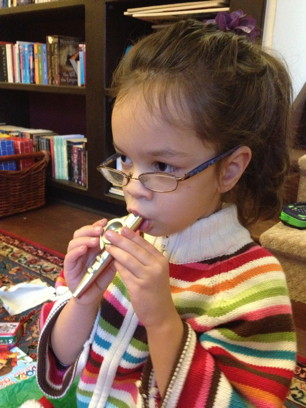 Headlamp. Note that Anand is up on his tippy-toes with excitement. 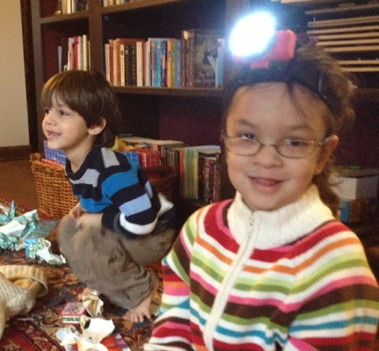 We always put a clementine in the toe (citrus in winter is important -- must ward off scurvy!), and if you look carefully in the background, Anand is insisting that he can open it himself -- with his teeth. That didn't go so well. 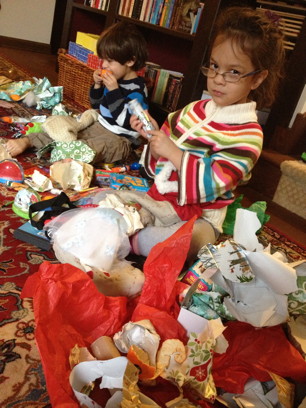 When stockings were done, we went downstairs, where the kids discovered their big presents -- a shopping cart and an air hockey table. Anand spent much of the evening racing around with his shopping cart. Other popular gifts included a dustpan and broom (kid-sized), a big set of Legos, a wood workbench and tools, and more. The kids made out like bandits this year. 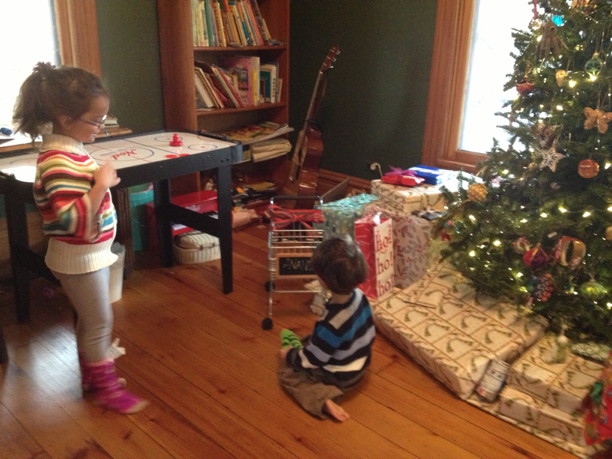 I love this photo because Kevin's mom has unwrapped the card that Kavi made for them, and Kavi is very excited. You can see it on her face. :-) 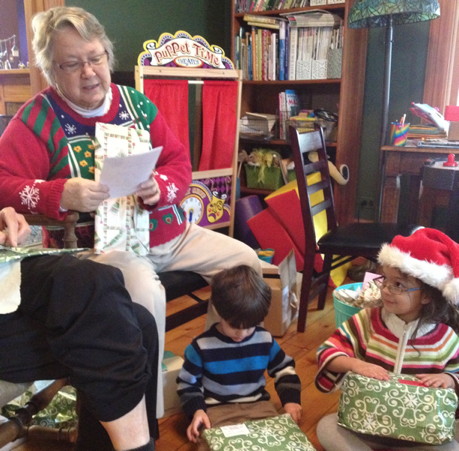 They're both pretty good with their capital letters, but hopefully this will help with the small ones. 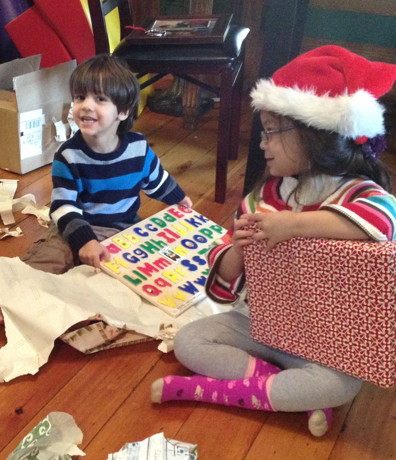 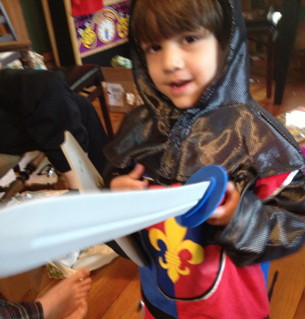 He can even manage the shield. 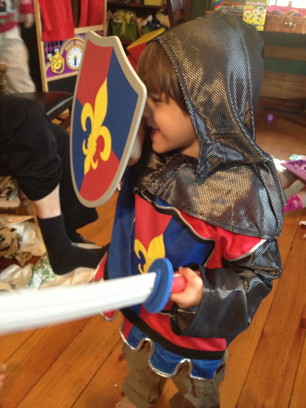 But then he found his Angry Birds costume, and that was the end of the knight. (Well, the knight came back later. The costumes were a big hit in general.) Kavi is also quite pleased with her new Hello Kitty -- she gave the old, dingy one to Anand, where it promptly became an angry bird kitty. I know, I don't understand either. But everything is angry birds in his life right now, or rather, maddy birds, as he calls them. His absolute favorite present was the set of four plush maddy birds Kevin got him, which he has been throwing at people almost non-stop since. Also, the new maddy birds pajamas. 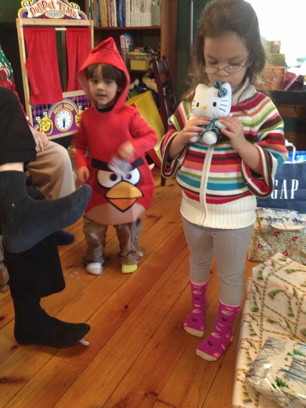 Kavi got a sparkle tiara kit (I can't remember from whom -- Aunty Susan?), and some dress-up jewelry from Aunty Karina. 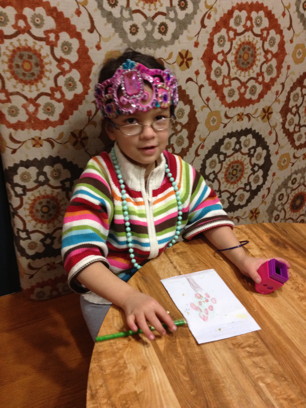 The next evening, we went out for dinner at the Junction Diner, a new train-themed restaurant in Forest Park. There's a huge bar area where the food gets brought to you on a train. (Like the sushi boats at some sushi restaurants.) The kids liked it, which is good, although I'm still mourning the stained glass store that used to be in that space. Ah, Two Fish. If you go with small kids, bring quarters for the train. 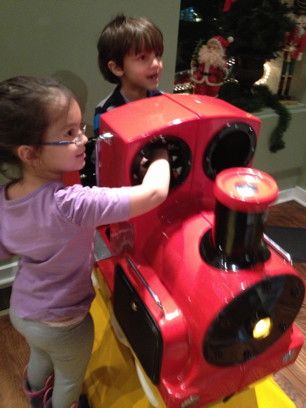 Trains. Some of the buttons do things. 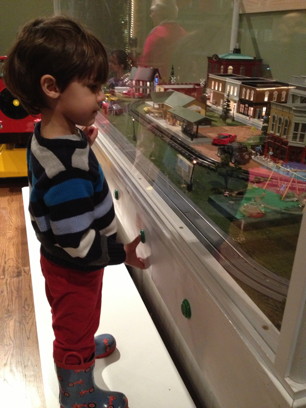 I'm just amused by the way my mantel decorations now have pink Legos interspersed. (When she's not playing with them, we've been putting them up there, so Anand doesn't destroy them.) 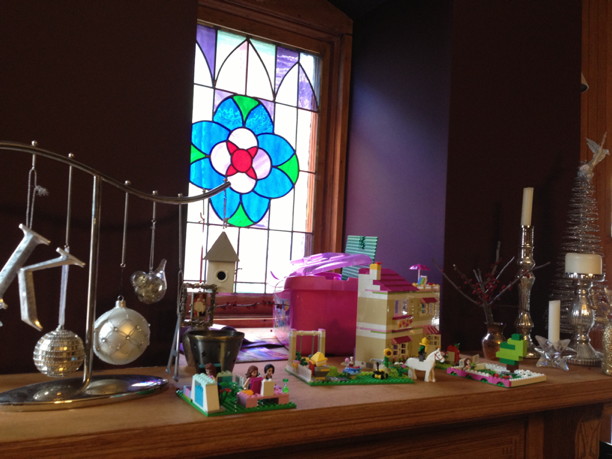 Kavi and mommy playing air hockey! She put together today's outfit herself, including her new pink leg warmers (from Chinnama, I think). 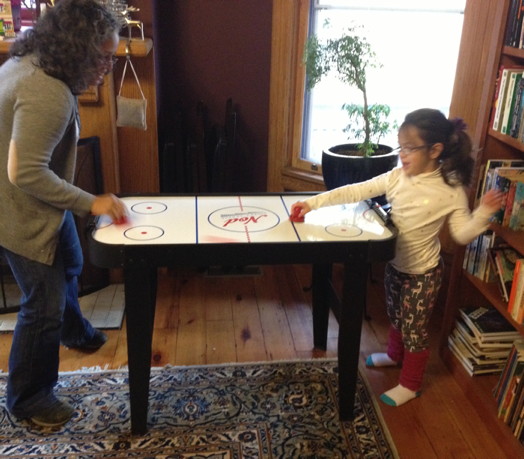