Pretty staircase, with green oak leaves carpet. Now, she told me what that signified, and I've forgotten already. 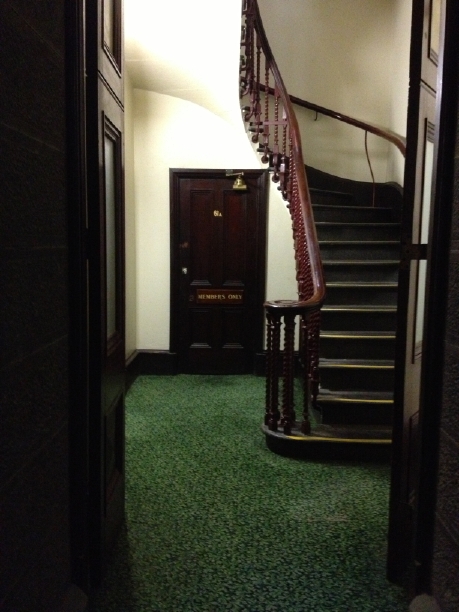 Karina's office in the basement! Love the arched 'window'. 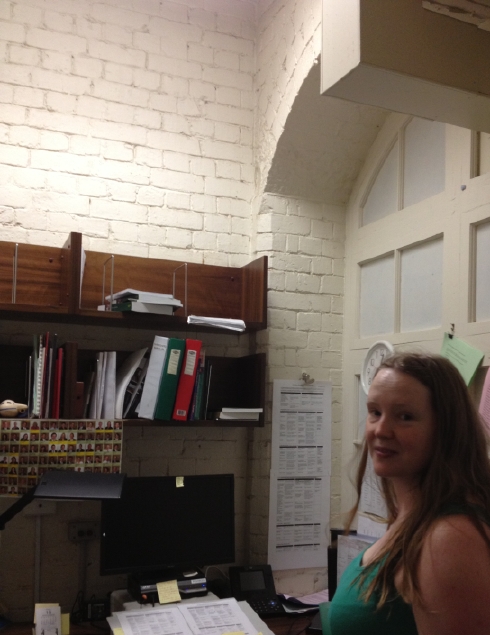 Is that elevator framed in copper? Shiny! 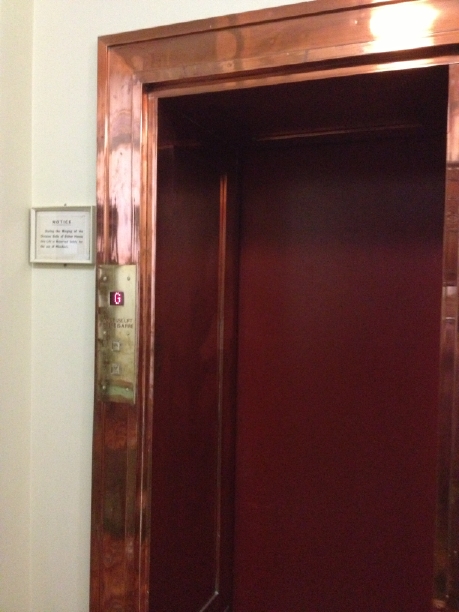 Outside, there are big concrete blocks, with fossil bits in, very cool. Karina says they're also there to keep angry people from driving trucks into the Parliament building. 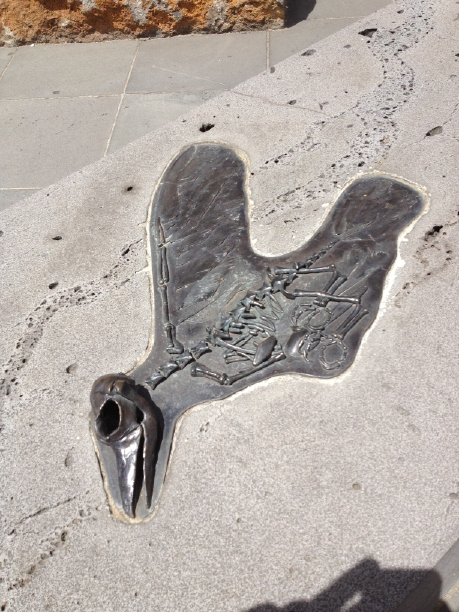 Lunch at Cumulus with three friends, also Hansard reporters -- I had to take a photo of this awesome dessert, a combination of citrus, creme anglaise, and soft meringue, I think. YUM. I think I could make that. 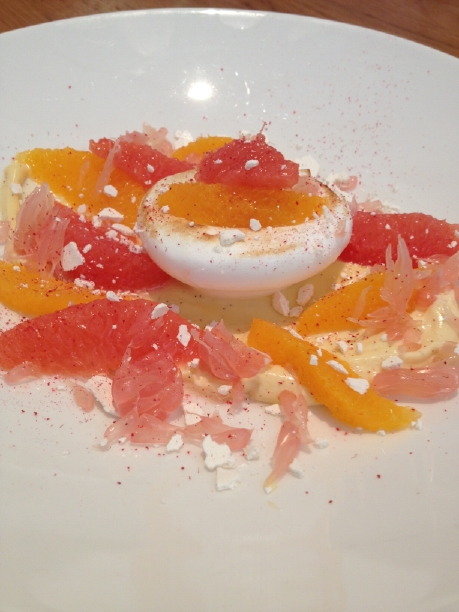 The bound Hansard reports, transcriptions of the Members of Parliament's speeches. 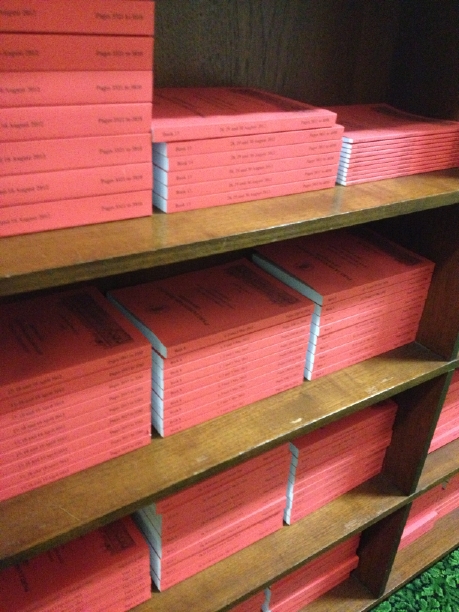 I think this is a hat hook, a remnant of the days when men wore hats. Those were the days... There were several of them through the building. 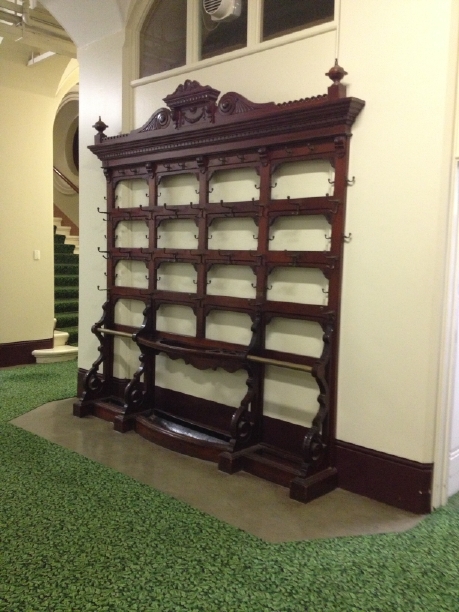 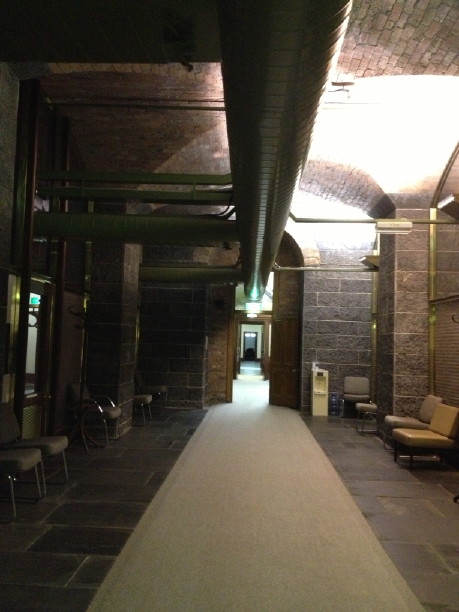 The public parts of the building are stunningly pretty. All the gold leaf is real -- that's what happens when you build your Parliament building during a Gold Rush. 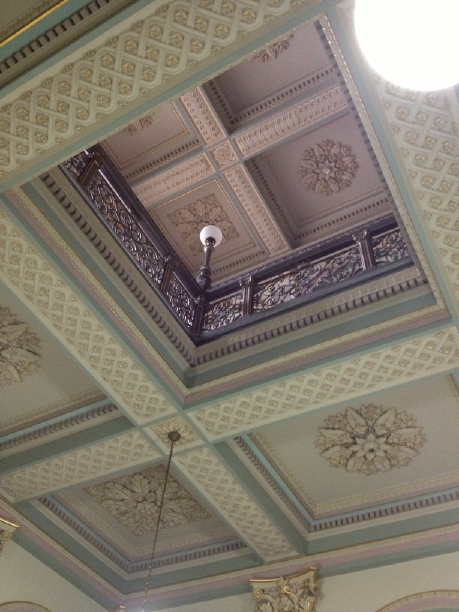 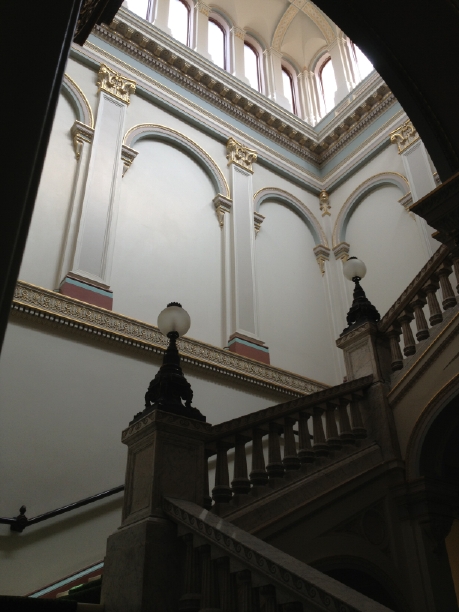 This is where Karina sits when she works, taking notes that she'll use to help her with the later transcriptions. 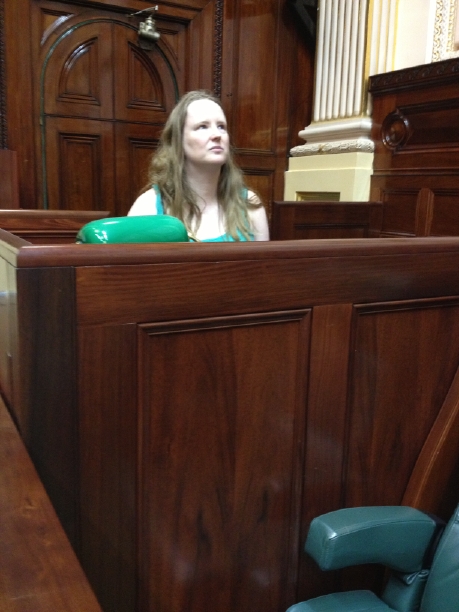 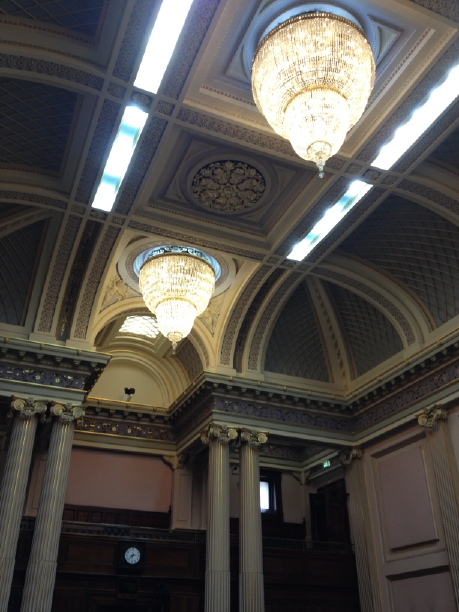 This is the Stranger's Corridor (I think it's called)? It's where you're allowed to get a meal if you're not a Member of Parliament. The building is divided into Member / non-Member, and when Parliament is in session, those rules are observed strictly, which apparently caused something of a fuss when a Member who was also a nursing mum wanted to bring her infant in to work... 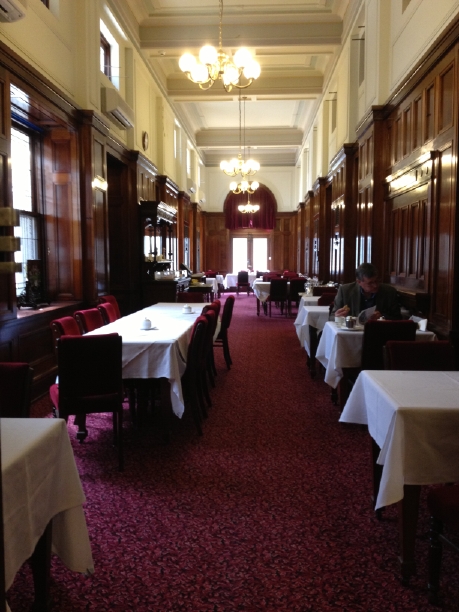 Since Parliament wasn't in session, they let us into the main dining room. 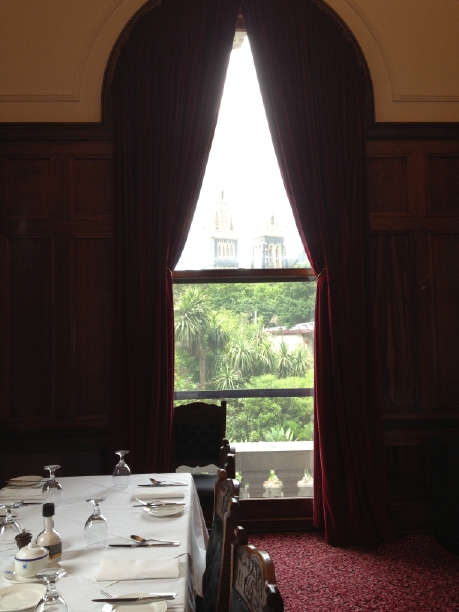 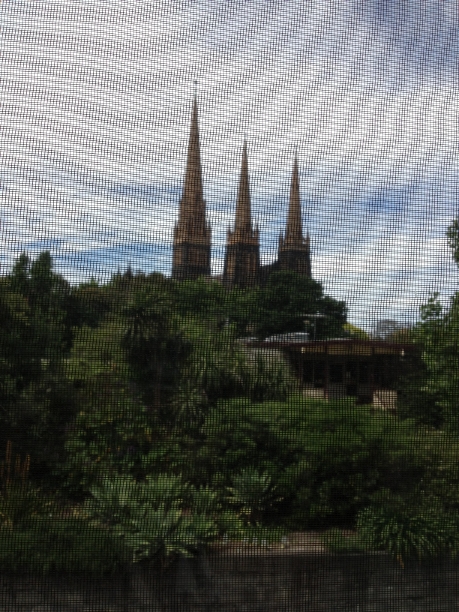 Imagine yourself there, weighing the weighty affairs of the nation. 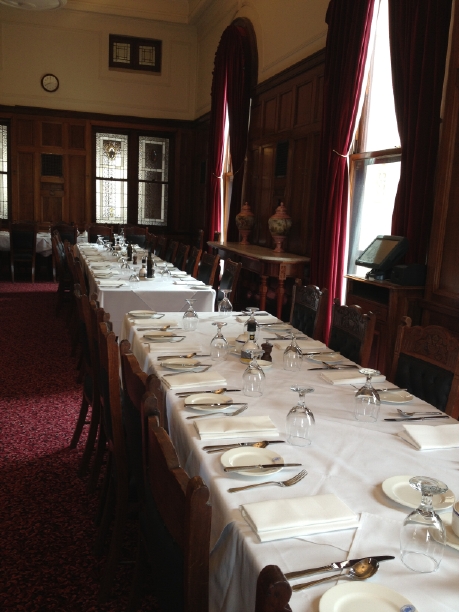 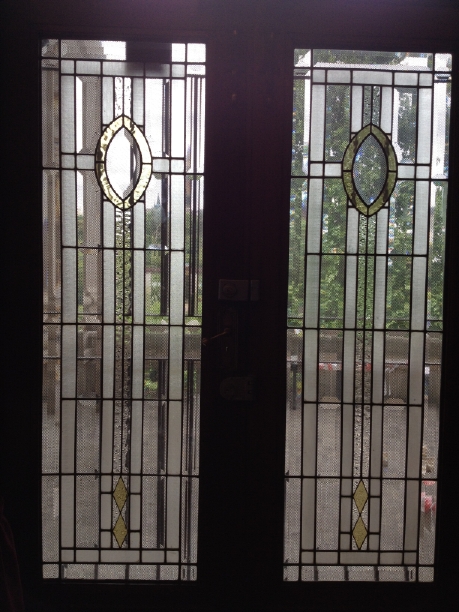 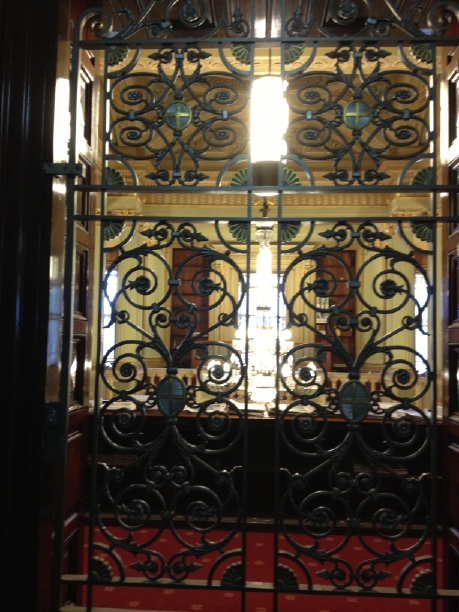 The view from the reporter's gallery -- I'm not sure you can see the detail, but that desk is just COVERED in scraped graffiti. 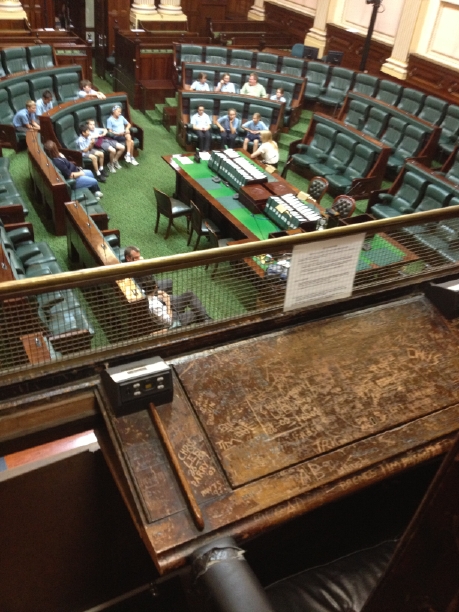 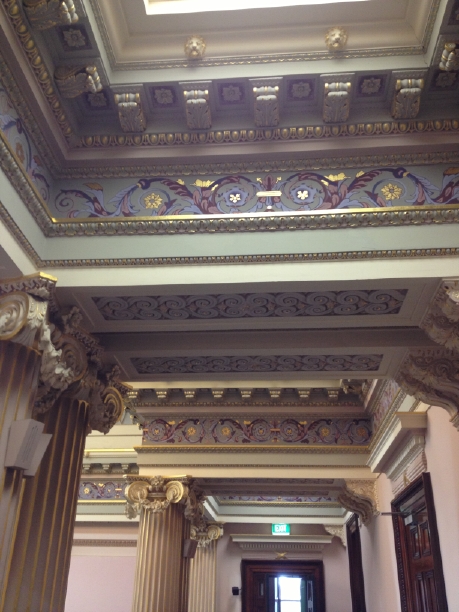 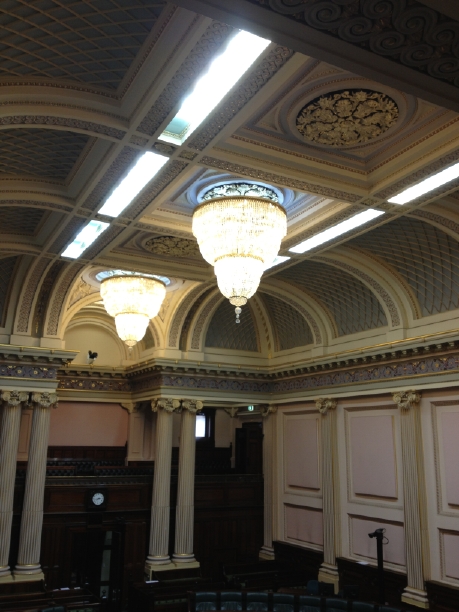 Okay, this isn't a great photo of either of us, but I had to put it up because it was taken by a retired Member of Parliament. How cool is that! He asked us to take a photo of him and a friend he was showing around, and then offered to take one of us. 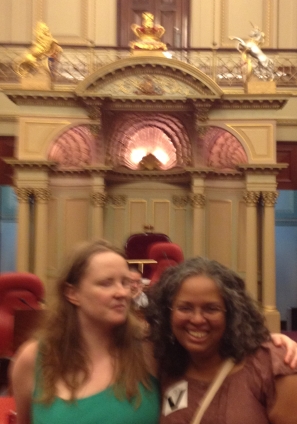