I didn't have time to implement everything I would have liked -- rainbow jello! rainbow bread! rainbow construction paper chains! rainbow crayon-and-wax-paper bunting! But still, it got pretty rainbow in our house. :-) 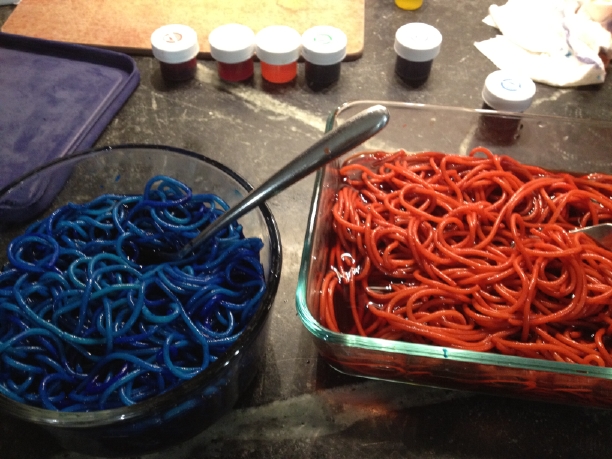 Gel dyes give you much more intense colors than you get from the standard liquid food-coloring at the grocery store. Mine are Wilton; I think I got them at Michael's, although Party City might carry them too. And Amazon, of course. 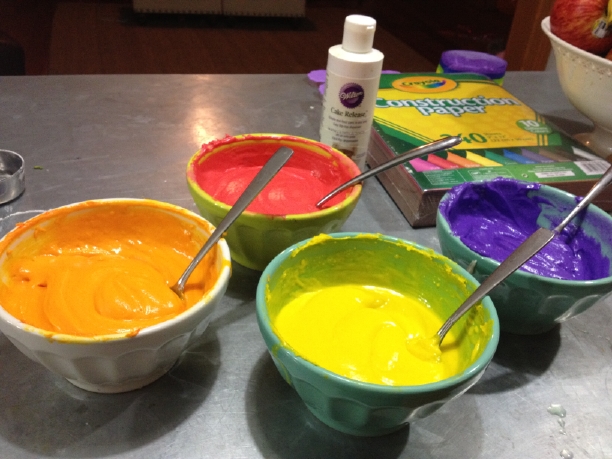 Batter for the rainbow cake. How much do I love Wilton's cake-release goop (in tall white bottle)? A LOT. I'm not sure what's in it. Flour and butter combined? You squeeze some into the pan, swirl it around, and you're done. Releases your cakes beautifully, without messy flouring step. 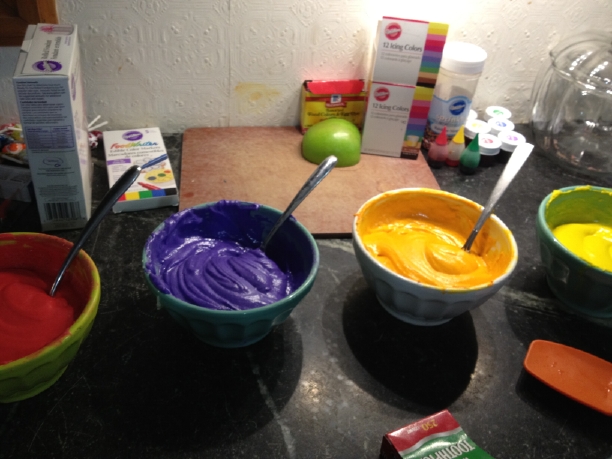 I can't decide if these are appetizing or frightening. 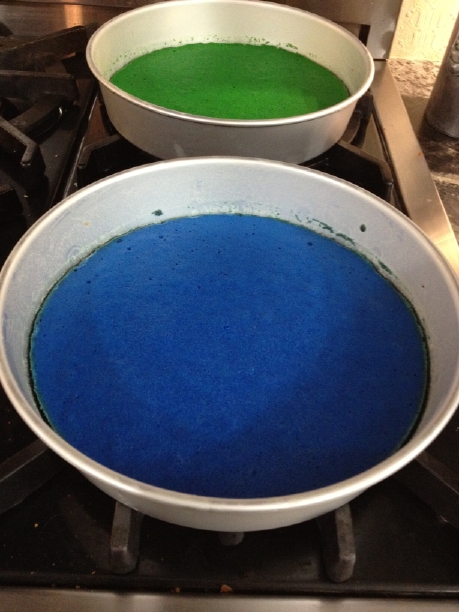 The color the batter is, is the color it'll be when baked. 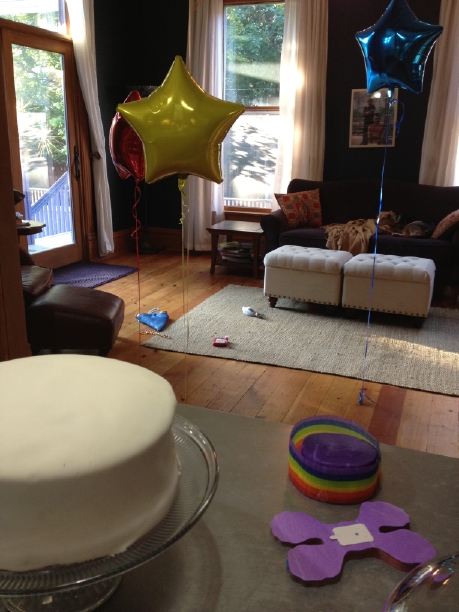 Layered the cake with frosting, frosted the top, rolled out the ready-made fondant, draped it over the cake. You can't see (because they are artfully hidden on the far side of the photo), but I had a lot of folds that got raggedly cut. You can repair fondant somewhat with shortening the internet says -- don't try to use water. Now they tell me. 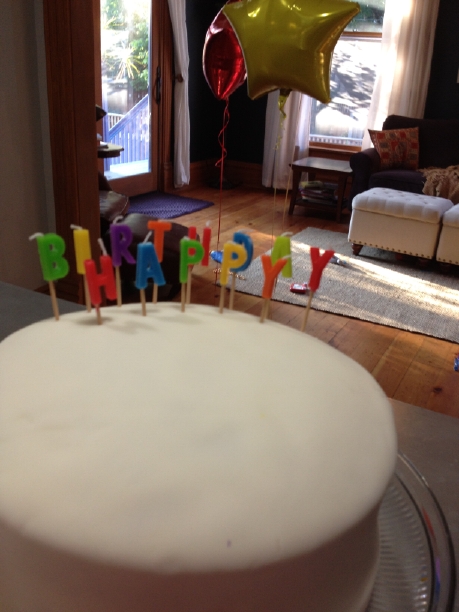 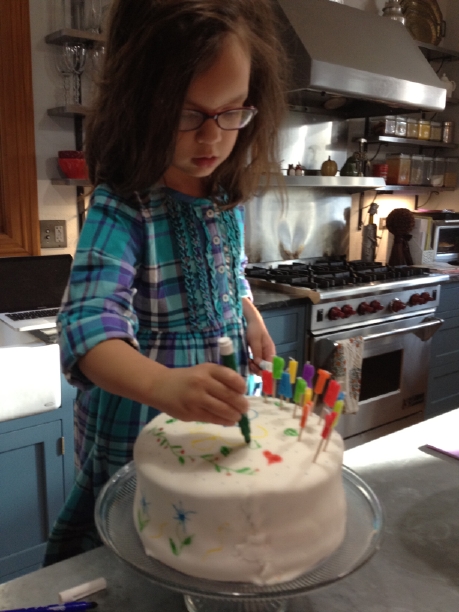 And then I turned Kavi loose with the food markers to make a doodle cake. (Oh, look -- there's my ragged edge. Sigh.) I did a few myself, which was fun, but her efforts are way more charming. I had to keep reminding her not to push too hard, but otherwise, she did great. 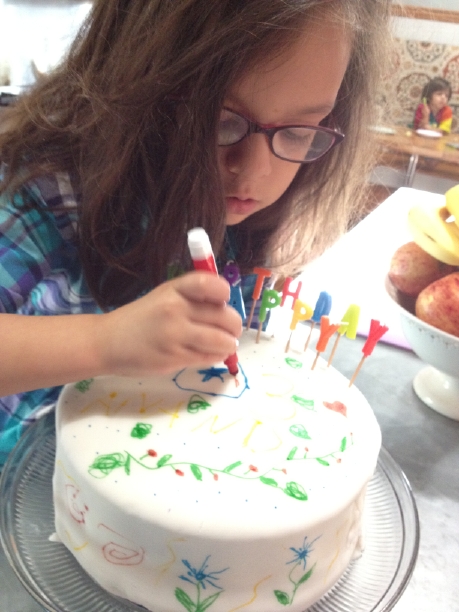 She gets very intent with her art. 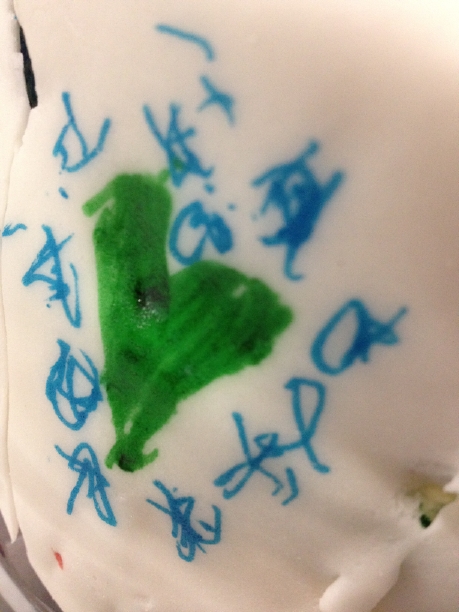 I'm not sure why I love this heart and squiggles of hers so much, but I do. 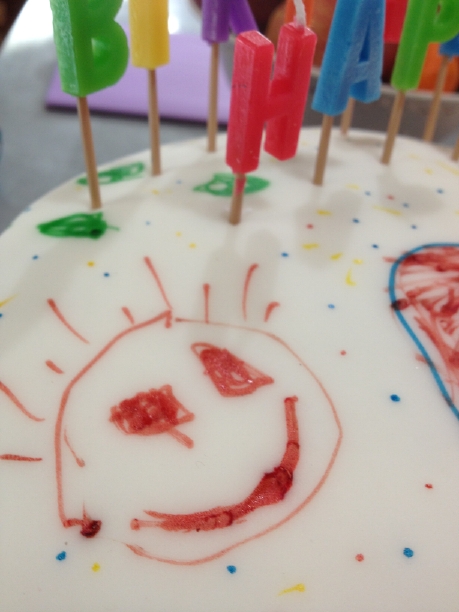 Umm...that might be supposed to be Anand? It's a little scary. 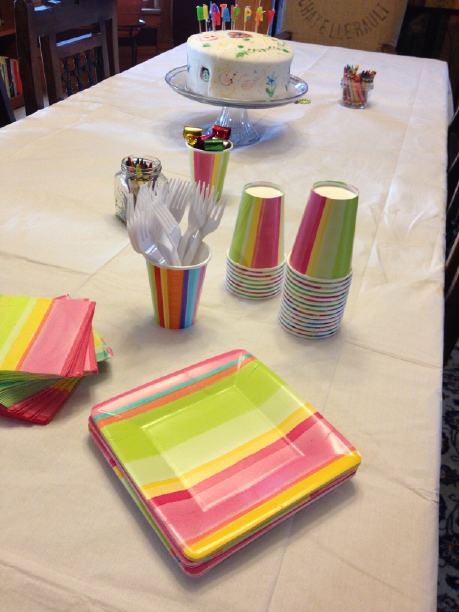 Party City, it turns out, has many rainbow options. The rainbow party theme is not a difficult one to pull together! 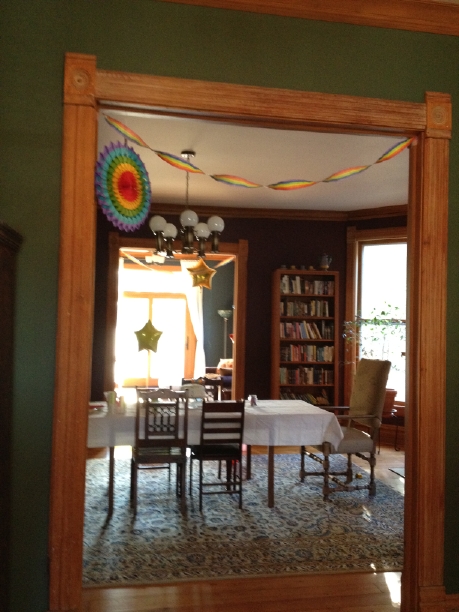 It's not a birthday party without someone standing on a chair, swearing at the scotch tape as they try to get the streamers to stay up. 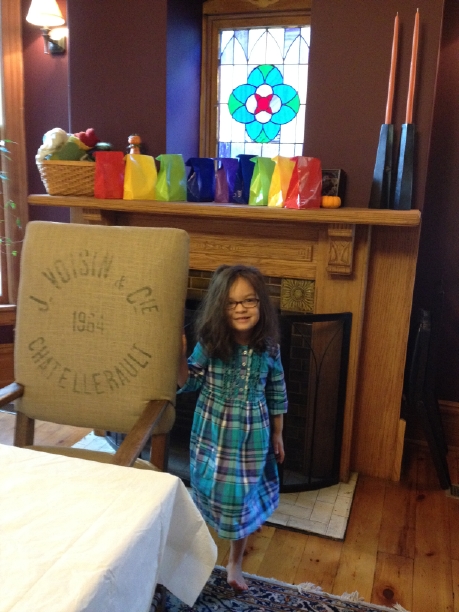 A rainbow of goody bags on the mantel, and one excited daughter. 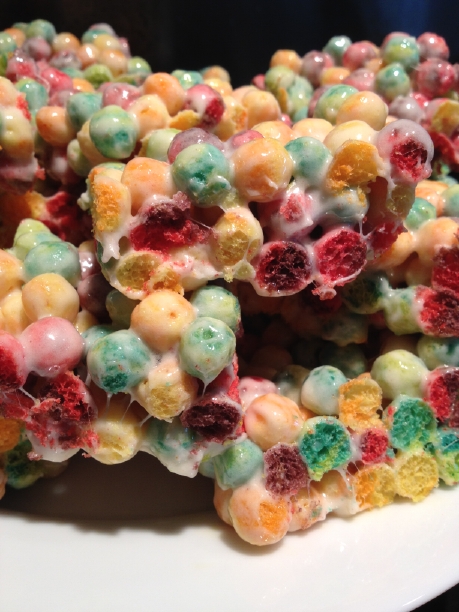 So, y'know Rice Krispie treats? These are the same things, but made with Trix. Totally disgusting, in my opinion, but rainbow-ish, and the kids gobbled them up. 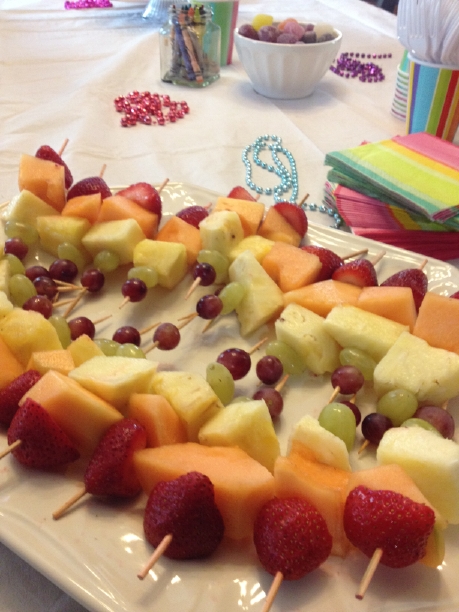 Fruit on skewers. I had to offer something healthy after all those Trix treats... 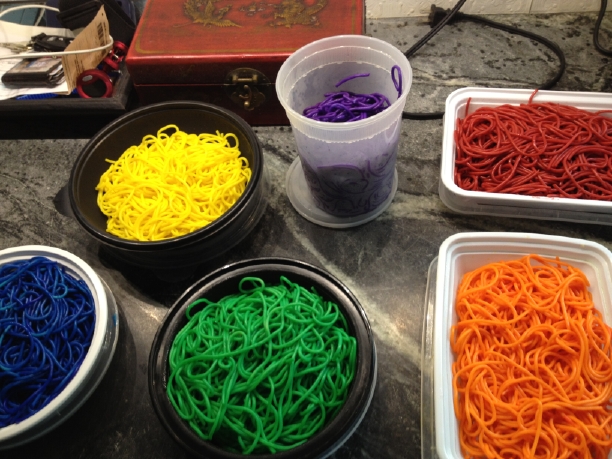 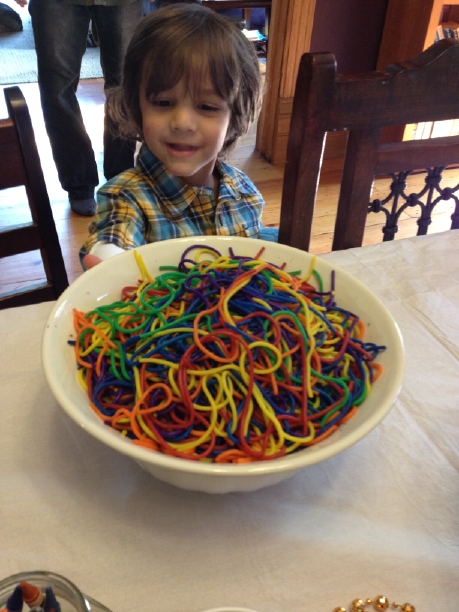 The kids thought the rainbow spaghetti was awesome, BUT they barely ate any. They played with them instead. Oops. Possibly because it was buffet-style; they were far more excited by Mike's chicken fingers. I have learned my lesson. Still, it was fun to make, and looked cool. We're going to be eating rainbow spaghetti for days. 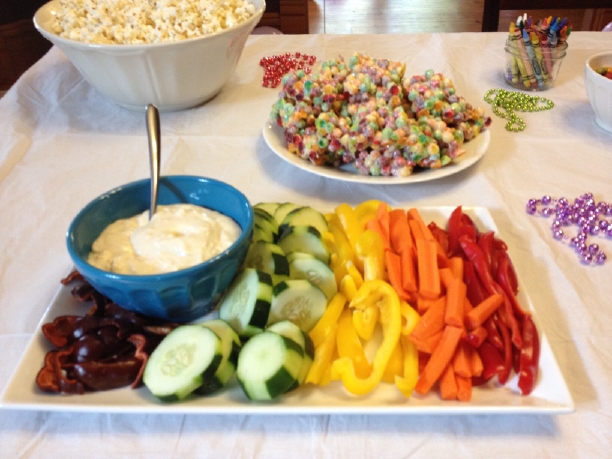 Veggies! Those peppers on the far left are ALMOST purple. Brownish-purple But at least they got eaten, which is more than I suspect we would have been able to say about purple onion slices, which is what I often saw in pictures of rainbow veggie trays. I didn't even try to find a blue veggie; my blue bowl sufficed. 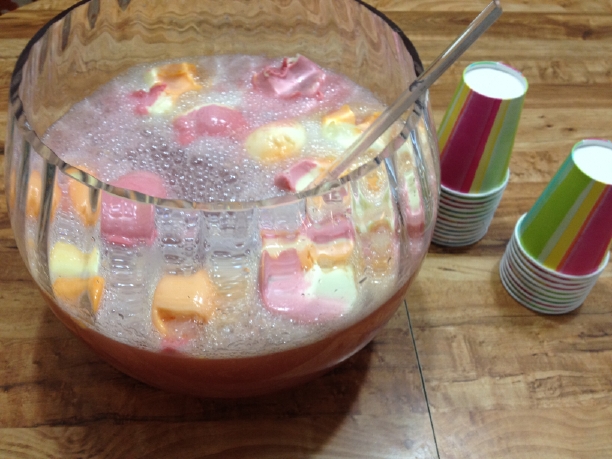 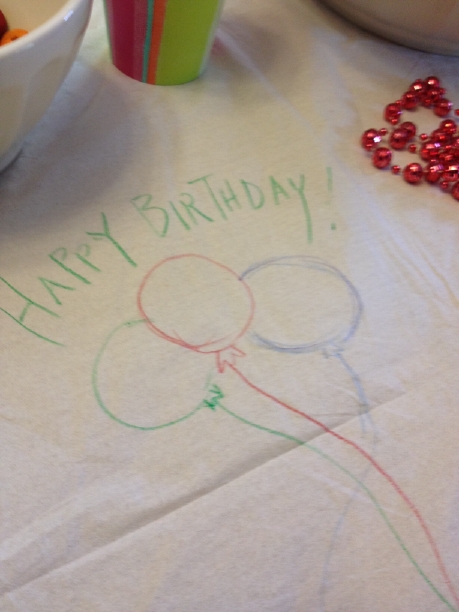 I was happy that people actually drew on the (paper) tablecloth with the crayons provided. 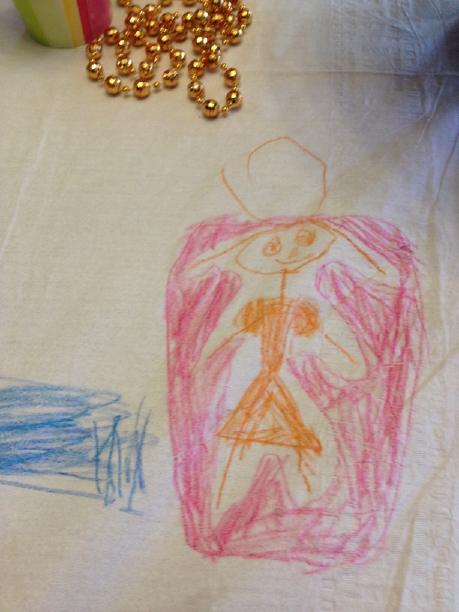 This is my favorite. 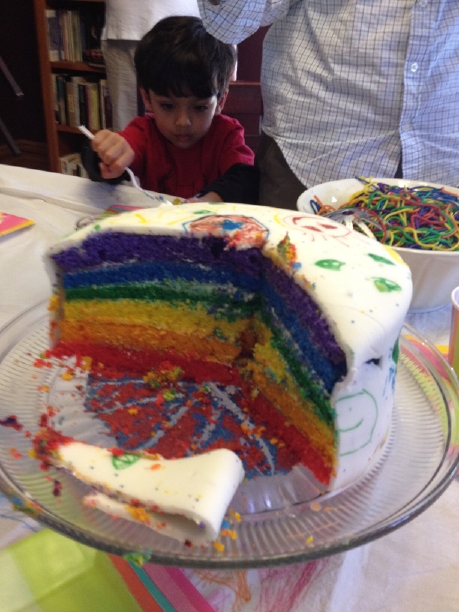 Not a particularly artistic shot of the finished cake, sorry, but there was a lot of excitement in that moment. The children get a little demanding when there is cake to be had. 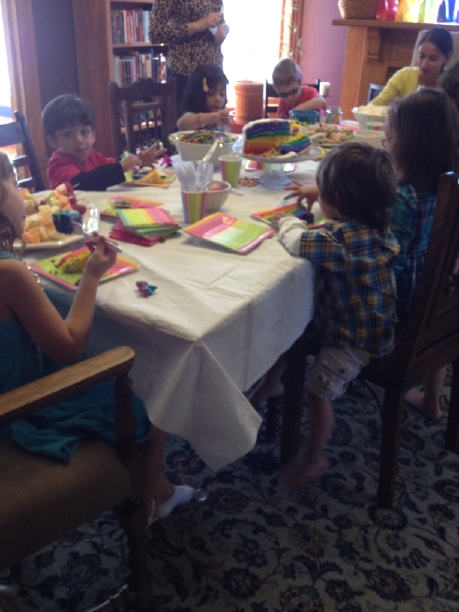 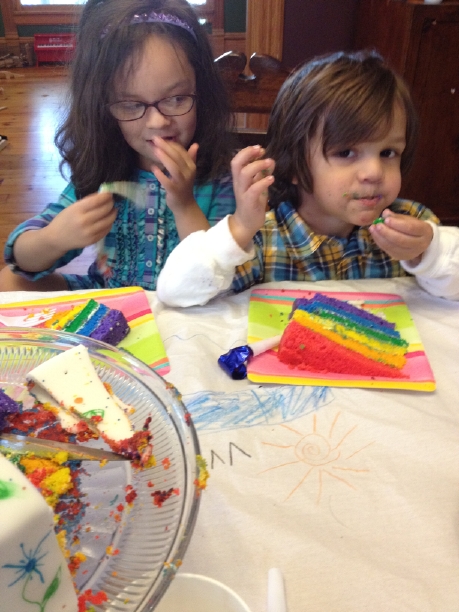 It's easy to share a chair, as long as you both get your OWN slices of cake. 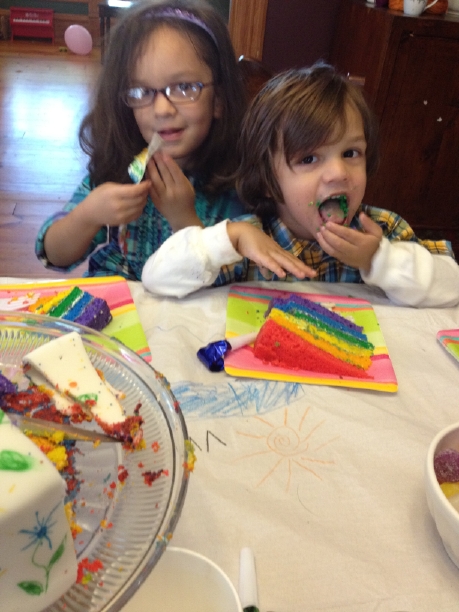 1 thought on “Yesterday, we celebrated…”