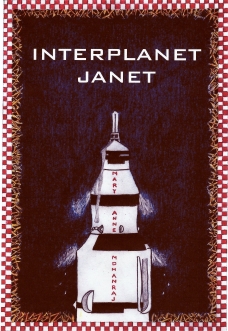 Okay, Interplanet Janet is up and available for purchase for $1.99, woohoo! My first eBook, made all my ownself (well, with BL Gilmore-Corcoran designing the cover). You can sample the first 30% for free at the link below before deciding to buy or not. I would very much love feedback on any formatting troubles now, so I can fix them early!

Please do note that I'm planning to release five of these long smut stories (about 50,000 words) as a collected eBook for $7.99, so that'll be a two dollar discount, if you want to wait and get the whole set (which I expect to have out by the end of September). The others will include:

5:45 update: Apparently, releasing a reprint ebook is not nearly as stressful for me as releasing a new book! But still, a little bit. Someone bought a copy! (Serge, is that you?) Will anyone else? I think it's just as well that my writer's group meets tonight and will keep me offline for three hours; otherwise, I'd be obsessively refreshing my e-mail to see if anyone else bought one.

I need to sell 18 copies to break even on my costs -- I paid my incredibly kind artist a mere $25 because I was really anxious about losing money on this. But if they do well, I think karma might demand that I send her a bonus. :-)