Facebook Instagram Youtube Twitter Patreon Shopping-bag
Menu
Time becomes strange at Ragdale. At first, there's a bizarre freedom. You can stay up 'til 3 a.m. working on your book, and there's no real penalty -- you can sleep 'til 11 if you need to, if you can. It's the 'if you can' that gets tricky, though. Because at the same time that you have this overwhelming feeling of freedom, of endless hours, you have a concurrent awareness that the days are slipping away. By day 6 of the two-week residency, everyone at dinner was talking about how suddenly, time pressure had slammed into them. We knew we were already almost halfway done, and we were starting to panic.

I've slept pretty badly at Ragdale. In part, that's because it's been so hot, and the central AC is on, but my room doesn't get very cool. There's no fan, and somehow I really need the sense of cooler air blowing across my face in order to fall asleep. Rita, our artist liaison, dug up a fan for me on the second day, but sadly, when I plugged it in that night, it didn't work. It had cooled down enough by night three that I could sleep okay anyway, but by that point, I was starting to stress out, so that was keeping me up. I tried various tricks for sleeping -- setting my computer to play rain sounds, reading and reading, watching tv (also on the computer). They sort of worked. But in the back of my head was / is this constant tick-tick-tick of YOU SHOULD BE WORKING.

The back of my head is sometimes not so smart.

I managed to get through, and even be productive, and by Friday (eight days in), I'd actually produced a solid second draft. I think the restructuring worked really well, judging by the comments coming in from my first readers, so if I don't accomplish anything else at Ragdale, I can feel that this whole experience was worthwhile. It would have taken me a month, at least, to get this done at home. Maybe much much longer -- after all, I finished the first draft of this book years ago, and it's just been sitting since then. 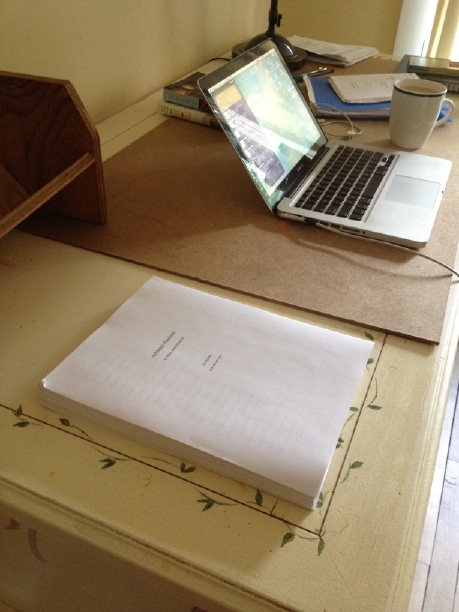 It's tempting to blame the babies for the delay, and they CERTAINLY contributed, but they weren't the only reason. There was the house drama, and then the house renovation project, and then there's just all the minutiae of daily life. The dishwasher repair guy to call, the weeds to pull out, the endless laundry, dinner to plan and cook and clean up from, etc. and so on. And you're tired, physically tired, so that when you do get a break, you don't want to sit down and try to do the hard work of writing -- you just want half an hour to re-read an old favorite. (Bujold's Curse of Chalion is on my desk right now.)

I got a taste of that again this past weekend. I had finished the draft and was ready for a mental break. Kevin's mother has been visiting while I'm gone, to help with the kids (although very sadly, Ann injured her knee just before coming, which I think has frustrated her a lot -- normally she would be racing after them, getting down on the floor with them, etc. They still get a lot of grandma love, though, and Kev's gotten a lot of help with the dishes!). Friday, her niece Margeaux, husband Rob, and adorable 17-month-old Nico (not sure I'm spelling that right) arrived. I came down a few hours beforehand, and stayed through 'til Sunday lunchtime. On Saturday, Margeaux's mom Marty and husband Fred also arrived, so it was a full family house.

I didn't have to go home -- in some ways, it feels a little weird, leaving Ragdale in the middle of residency. On the other hand, a) I don't know these relatives well, and neither does Kevin, so we all wanted to get to know them better, and b) sometimes you need a little break. If I'd really been in the midst of working, on a hot streak, I wouldn't have gone. But I'm glad I did.

We had a good time, I cooked like crazy on Saturday and got out some of my cooking urges (I really get restless if I go more than a week without cooking curries, I think -- it's so weird). I got to watch the kids play BEAUTIFULLY together -- the three of them had an awesome and remarkably peaceful time. I gave my back a break from sitting in the desk chair typing (it's already starting to ache again now, this morning, now that I'm back at Ragdale). And I was reminded that keeping house and running around after the kids is hard work; I was really tired by the end of the day Saturday, and I dropped off and slept like a log. Oh -- that's why I sleep so well at home. It's not just the ceiling fan above the awesome bed and Kevin in it with me. Although those surely help too.

Feedback is starting to come in from my first readers; I told them I'd be away over the weekend, and I'd come back to work today. Overall, LOVE. Which is so so nice to hear, because that's a big improvement over responses to the first draft, which were more, 'well, there's some interesting stuff here.' Now I'm getting the enthusiasm cranked up several notches, which is so fabulous. That's a week at Ragdale very well spent!

There's more to do, of course. A lot more, in fact. But this is already long, so maybe I'll talk about that tomorrow. Right now, the time pressure is starting to get to me. Just three more days at Ragdale. Tick-tick-tick. Back to work.

2 thoughts on “Time becomes strange at…”