Menu
There was some unexpected drama today, after what had seemed to be a typical Ragdale day. The days don't have a pattern, exactly, but some elements do recur. Today it was writing in the morning, gym + swim at noon. Thankfully Ann gives me a ride over when she goes; I could walk the two miles there and ditto back, but it is often quite hot for that. Lunch of leftovers (Linda made us Moroccan stew over couscous last night, plus sides), and then more writing. Around 4, I was burning out and my fingers ached, so I signed out. Read for a while, hung out on Facebook, read some more. It was getting close to dinner time when I got a call from Kevin. Kavi had a splinter in her foot, and she was freaking out.

See, taking splinters out is typically mama's job. And Kavi -- well, she is not brave about such things. She howls, in fact. She yanks her foot away if you reach for it. She cries and screams. It can be quite a production to talk her down enough to take the splinter out. Please imagine me trying to do all the talking down over an echo-ey cell phone connection, while she howls things I can't quite make out on the other end and Kevin periodically translates. It was half an hour of awful, and we seemed to be making no progress (though I tried every talk-down, every threat (you'll have to go to the hospital! your foot will swell up and turn bright red!), and even bribe (you want a Princess Celestia My Little Pony, don't you? and how about a cupcake?) that I could think of. It was not my finest parenting hour.

Finally, I told them to take a break, and went to have some dinner. (Gyros and grape leaves, yum!) When I finished, I called them back, only to discover a very happy little girl on the other end. It was out! I asked for Daddy to find out how this miracle had been accomplished, and I'm afraid a bit of brute force may have been applied in the end. If I'd actually been there, the brute force would likely have come out a lot faster; Kev is very reluctant to employ that sort of thing. He had gotten Kavi to agree that the splinter had to come out, that Daddy ought to do it instead of the doctor, and that it should even happen right now. But she was still too scared to actually let him have her foot, so in the end, I'm afraid he just grabbed it and held on tight while she hollered bloody murder. As if she were being bloodily murdered, that is.

But now all is fine and dandy, the splinter is out and her foot feels much better, and I think Kavi believes she's getting a pony for her bravery. We'll see.

After all that drama, I needed a breather. Also after all that dinner. So I went for an evening walk on the prairie, which I haven't done before. I discovered the prairie has mosquitoes in the evening (dammit.), so I may stick to morning walks from now on. But I'm glad I went -- the two mile trek was soothing, the flowers in the setting sunlight were lovely, and I even discovered a few little treasures in the woods, quiet marks of human hands. Like this one: 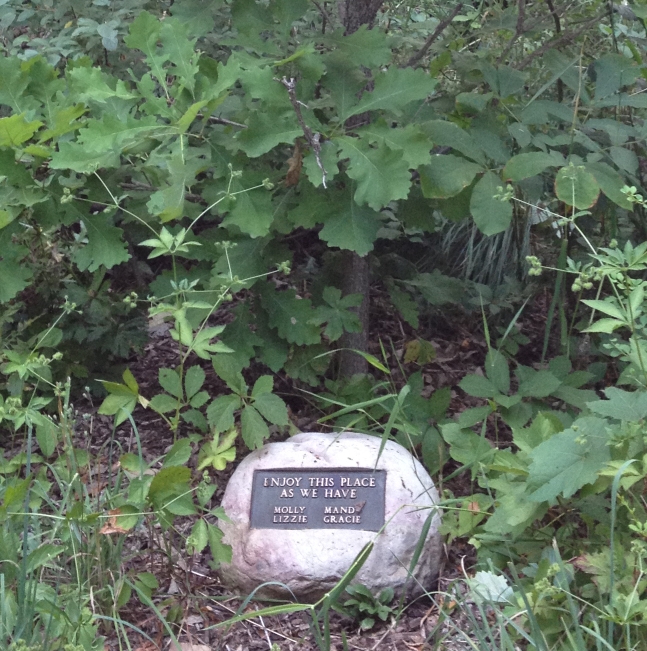 The inscription on the stone reads, "Enjoy this place as we have. Molly, Mandy, Lizzie, Gracie." I don't know who they were -- there are several properties with entrances onto the prairie, and I don't recognize their names from the historical info on the Ragdale house. Perhaps they were sisters, or friends. Regardless, the spirit of generosity embodied in those words seems very much in keeping with the Ragdale tradition of creative collaboration and shared joy.

This place is such a gift to the artist -- unsurprising, since the place was first loved by a family of artists. Howard Van Doren Shaw was the architect who bought the property (which included an old farmhouse and a barn). In 1897 he built the house that still stands. His wife, Frances, is described as a �poet, writer, and traveler [who] lived at Ragdale six months of the year, while her three children were growing up.� The family ultimately included two architects, a painter, two poets, a sculptor, a cartoonist, and a weaver.

I doubt our house will ever become an artists' residency; it's not in the right place, and it's not the right size. But I do hope, between our children and our work, that Kevin and I can leave a worthwhile legacy when we go.

More progress today -- two more chapters revised, up to 24,826 words in solid place. I know this pace seems frenetic, but keep in mind that most of these aren't new words; they're just moved around. A lot. Still, good work for the day. That seems like the best way I can say thanks to the Shaws for their kind gift of time and space. Work hard. Make good art.

And leave the splinters to Daddy. :-)

2 thoughts on “There was some…”