Facebook Instagram Youtube Twitter Patreon Shopping-bag
Menu
Ragdale, Day 1. What is it? Two weeks at an artist residency on the prairie. What do I hope to accomplish? Serious revisions to Arbitrary Passions. With any luck, I can actually finish a new draft of the book.

I took the train up from Chicago, which was easy, and then walked a mile to the Ragdale site. Normally, walking a mile is no problem, but dragging a heavy (small) suitcase and walking through 100+ degree heat was a bit of an endurance test. And then I arrived late for orientation, accidentally, oops. I hate being late, especially if it involves inconveniencing people. Somehow I thought it was meant to be an hour later. Not the best start to the residency.

But everyone is very nice, the houses are beautiful, the grounds look lovely, it's a shame it's so blazingly hot. Although it is three degrees cooler than Oak Park, which is something. At 5 a.m. tomorrow, it should only be 78, so perhaps I can squeeze in a walk on the prairie if I'm up early. And it should cool down significantly by Sunday, supposedly, and then there will be long walks, I suspect. The ocean is a few miles away. Maybe I will swim there. They say the water's about seventy degrees; I have no sense of whether that's reasonable swimming temperature.

Dinner was delicious; I feel very spoiled, having a chef cooking dinner for us six nights a week. We introduced ourselves and chatted over the meal -- there are thirteen artists here, in a variety of genres. Maybe a little over half are writers? The staff mostly seem to be working artists too. And as a nice and surprising bonus, one of the writing faculty from UIC is here as well; I'm looking forward to getting to know her better. We see each other in passing in the halls, but haven't ever had a chance to chat. Also one of the UIC grad students, whom I know slightly, and who has graduated and moved on to a teaching job. 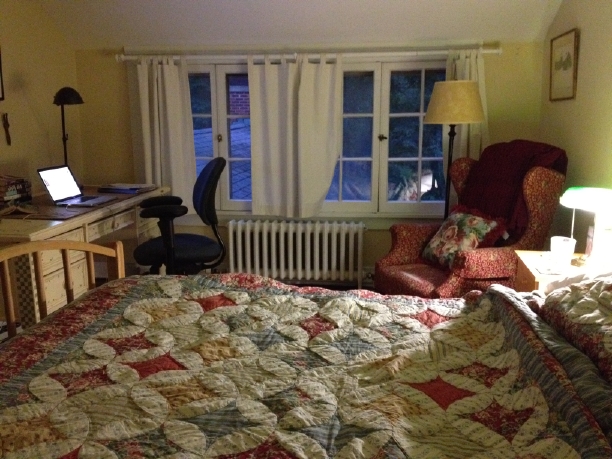 I am in the Yellow Room, which is not as charmingly named as some of the other rooms (the Hayloft, the Sewing Room, the Top of the Stairs), but is quite large and sweetly furnished. I think this must have belonged to a daughter of the house, once upon a time. The bed is very inviting. Right now, I am tired tired tired. I brought several travel memoirs with me, for research and inspiration, but I knew that I probably wouldn't be able to dive right into working, so I also packed a Terry Pratchett to re-read. Good call.

Also a good thing Kevin reminded me to bring my headphones, because the one thing that's throwing me a little is how very quiet it is here. The quiet will be good, but right now, I can't play music in my room because the walls are too thin, so it's a very good thing I have my headphones. The quiet is getting to me.

It's only 8:40 and my eyes want to close. I'm going to go lie in bed with my Pratchett and will likely be asleep before 9. I'm short on sleep (I blame the fireworks, in part), so my big goal for tonight is to get at least eight hours. Nine would be better.

And then tomorrow -- well, we'll just have to see how it goes. They said not to worry if it took a day or two before we started being productive, that sometimes, it took a little acclimating to the place and the pace. Okay, then. I'm going to try to trust in the space, and the process.