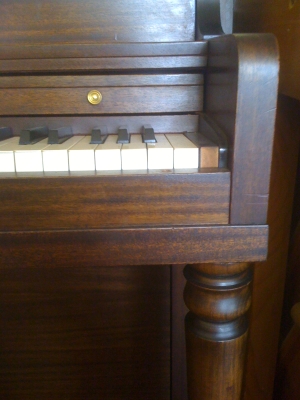 Yesterday, Kevin and I drove an hour north and bought a piano. Yay! It will be delivered Thursday.

It was a bit of a saga. First, we researched pianos. Everything we read said that we should avoid the smaller console and spinet pianos, because the shorter strings meant inferior sound quality even in the best versions. We were supposed to look for a full-size upright studio piano. Okay, fine. We started researching brands, but that got overwhelming, and given that we were looking for a budget starter used piano, ideally in the $2000-$3000 range, the impression I got was that brand wasn't actually all that important. Okay, there were some terrible brands, but there were also plenty of decent ones, and decent was the best we could afford to aspire to. I talked to some piano technicians for advice, and in the end, visited two stores.

The first was in Oak Park, run by Wolfgang Loentz, and while he was charming and seemed knowledgeable and trustworthy, he was almost sold of out non-grand pianos. His main business is restoring Steinway grands and the like. He had one upright, which sounded great, but it wasn't pretty, and I admit, I care about the pretty. It was also at the high end of what we could afford. And then he had one charming little baby grand with gorgeous twisted legs and a matching bench, which I kind of fell in love with, that he was willing to let me have for pennies (not actual pennies, but surprisingly close!), because it was a frankly inferior piano in all respects. I came home thinking seriously about it, but Kevin convinced me that we really didn't have the space, not unless we wanted to commit our teeny front parlor to just be a piano room with maybe one little chair. Which seemed unwise, given that I'm really not sure how much we're going to use the piano.

I mean, I hope we'll use it a lot. I played fairly seriously growing up -- I studied for eight years (like many other good South Asian children), and at the height of it, age 14 or so, I was performing twenty-page memorized Rachmaninoff pieces and practicing two hours a day. (Plus an hour of flute, plus an hour of Indian dance. That was kind of a brutal year.) My piano teacher even asked me, around that time, if I wanted to try for a career in piano, that he thought I had a shot at it, though of course I would have to move to practicing more like 6-8 hours a day instead of 2. I said "hell no!" But I do actually quite love playing, and I would ilke to get some of my classical chops back, after twenty-five years away.

Realistically, I don't think I can fit serious practice into my life again anytime soon, so in the shorter term, I'd love to pick up some Broadway and Disney sheet music (I just spent an enjoyable half hour adding several books to my Amazon lists, as a reminder for when we have some more spare funds). That's the kind of thing that I can just sit down and sight read with reasonable effectiveness, and I can sing along, in my enthusiastic but totally unskilled way. My children love my singing, and that's all that matters. Kevin can put his earplugs in.

And of course, we're hoping the kids will learn. Learning piano young is one of the few things that actually does make you smarter, according to some of the research I've looked at. Something about making the two halves of the brain talk to each other? The mechanical manipulation of the fingers and the auditory processing of the music? I have no idea, but smarter kids can't hurt, right? Also, piano is fun. Kavi's the right age, so I'm going to take a stab at teaching her -- I have some Music for Little Mozarts books that my sister got us a few years ago (when we intended to have a piano much sooner, but then all the housing chaos intervened). If she does not take to mama as a teacher, then we'll try actual lessons with a real teacher. And maybe she, or later Anand, may really take to it, in which case, great!

But they may not. And I may not play as much as I think, and like many families, the piano may only be dusted off for caroling at the holidays. So with that firmly in mind, it didn't seem to make sense to get a baby grand that we would have to dedicate an entire room to. So I sadly said goodbye to that one, and we looked around some more, and then drove an hour north to Waukegan to the Family Piano Company, which actually is run by a family of piano technicians. Mom Alice runs the store, her adorable son helps out and runs the accompanying coffee shop (he made me a nice chai :-), and his fiance was there, working, having just rebuilt her first piano, top to bottom. They were all totally charming. Which is not a reason to buy a piano from them, I know, but it didn't hurt. 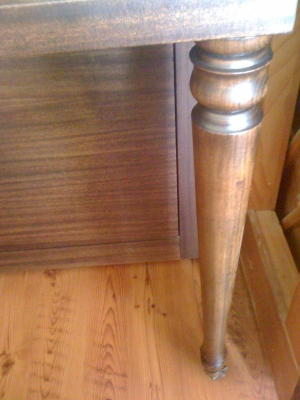 They had about a dozen suitable used pianos for us to look at, and while we started out looking at upright studio pianos, the full-size ones, I kept being drawn to the little spinets. Even though I knew, and could hear, that the sound was much less full and rich, I just was charmed by them. They had prettier details than any of the uprights they had in stock, and they were a little older, which I like -- not old enough to be valuable antiques, of course, but old enough to be weathered. To have a history of living in peoples' houses, being played by tiny hands, being dusted off for holiday carols. And honestly, I feel a little bad that I care about that and about the pretty almost as much as I care about the sound, but I guess I'm just not a serious musician, and it shows. Oh well.

The plus side of not being a serious musician is that the spinets and console pianos were much cheaper than the better-sounding uprights. The uprights I really liked started around $3500 and went up, which was all out of our price range.

Sidebar here -- so why didn't we just get a free piano on Craigslist? After all, when we bought this house, there was a baby grand in the front parlor, and we gave it away. Lots of people are giving away pianos all the time. I even have a friend (Jessie!) who actually destroyed her piano piece by piece when she couldn't get anyway to take it away. I admit, I winced when I read that she was doing that, and even more when I saw the pictures! But I think I just needed to get over the idea that a piano was somehow almost holy -- a beautiful instrument that should be preserved at all costs. It's similar to the way I sometimes feel about books -- I see people making beautiful art out of cut-up old books, and I love it, but I also shudder a little. Because, y'know, it's a book! Or a piano! (I gather some strange people feel the same way about their cars?) And it's been a process for me to come to accept that even books and pianos come to the end of their usable life. If no one wants it, if it's in terrible shape, if it's not worth the money it would take to repair it because it would still be crappy after all that -- maybe it's time to let it go.

That's why we gave away the baby grand that came with our house, because we had a piano technician come out, and he told us, sadly, that it was beyond reasonable repair. That with everything he could do to it, it would still have a terrible time holding a tune, and that it would cost us more in frequent tunings than it would to just buy a better piano. Sad. I was very glad that a mom in Oak Park decided that despite that, she wanted it so her teenage daughter could practice at home for a year before she went off to college, and I hope that the cost of moving and tuning it proved worthwhile for them.

Now a free piano on Craigslist might not be that bad. But odds are, it probably is. There's a reason they're giving it away. And after you factor in the cost of having a piano technician out to look at it, and then paying for real movers, it's not free anymore. And of course, no warranty -- if it falls apart in a month, you're out of luck, and now you have to figure out how to get rid of a broken piano. I'm not saying don't get a free piano -- just be aware that it's probably a $500 gamble, regardless. We decided it just wasn't worth the hassle. End of sidebar. 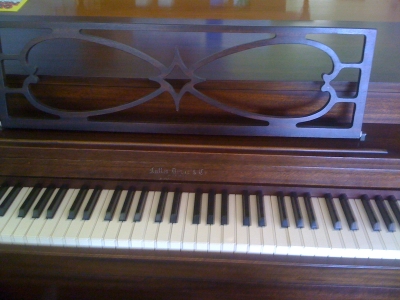 In the end, we bought a 1950s Hallet & Davis spinet. I gather that Hallet & Davis has moved its production out of America, and I can't speak to the quality of their more recent pianos made in Korea and China, but I think at the time ours was made, they were still a Boston-based company with a decent reputation, for what that's worth. It came with a 3-year warranty, which is important for a used piano. Also a free tuning. :-)

It feels a little weird, going against all the piano-buying advice on what to get, but I guess in the end cost, pretty, and history mattered a little more to me than sound. I do like the sound of the spinet we picked out -- it's not as rich and resonant as the bigger uprights, but it's not painfully tinkly either. A little thin, and Rachmaninoff may sound strange on it, but it should handle Bach and Mozart just fine, for my tastes at least. And it's certainly sufficient unto the task of accompanying me as I belt out songs from Camelot or Les Mis. I think it can also handle "Twinkle Twinkle" and "Mary Had a Little Lamb." :-)

One more nice thing about this store is that they offer full trade-in value if we ever decide to upgrade. So if I, or the kids, get more serious about piano later, we can get an full credit towards our new piano. That was reassuring for us.

And in the meantime, I get to play a spinet! I mean, I know it's not really the same as a Jane Austen spinet, since that was actually a harpsichord, and the spinet piano wasn't built until the 1930s, but shh....let's pretend we don't know that. Instead, let us rejoice that I have a spinet! Just like Elinor and Marianne! Soon, I will have my friends over for tea, in our pretty muslin frocks, and then we will go to the 19th Century Club up the street, and do some English country dancing. For real -- we actually have that in Oak Park once a month, hooray!

Please note that I will not, however, be wearing a corset. I have tried them, and while they are very pretty when worn on the outside (which Austen would not have approved of anyway), I am completely unwilling to wear one while dancing. I like to breathe, and I am hopefully past my days of fainting prettily for the benefit of bashful young men. :-) 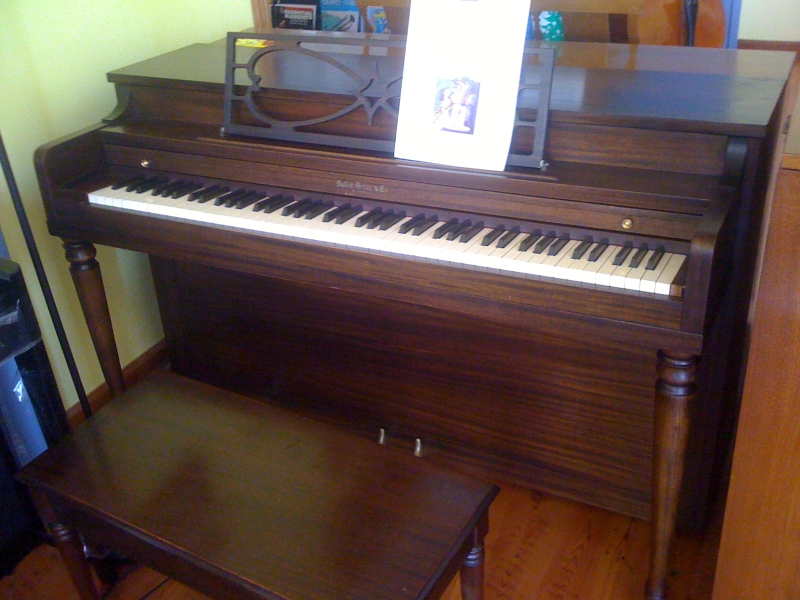 We have a piano!

"I know we shall be happy ... I mean never to be later in rising than six, and from that time till dinner I shall divide every moment between music and reading." -- Marianne Dashwood upon setting out for Barton Cottage

6 thoughts on “Yesterday, Kevin and…”