Facebook Instagram Youtube Twitter Patreon Shopping-bag
Menu
We had the Sri Lankans over for brunch on Sunday, and it was splendid. Mostly due to the great food and great company, but I have to admit, I also enjoyed how much they liked our house. :-) We put so much work and energy and thought into this renovation, and it's mostly for us, but it's also for our guests, and we really wanted people to be happy and comfortable and enjoy the space. The thing that probably gets commented on the most are the colors -- in most of the first floor, the walls are these dark, moody Farrow & Ball colors, and it's unusual and people seem to really like them. Put color on your walls! Don't be scared!

But the other thing they commented on a lot, and maybe this is because Sri Lankans really really like our food, was the kitchen. It is a GREAT kitchen, especially for entertaining, and I think Kevin gets most of the credit for that, because he was really insistent on maintaining sufficient space in the design phase when I might have cut corners (ha ha). So we have an island, and it is just exactly big enough, because if we'd made it any bigger, we'd have crowded the walkways. The way it turned out, you can easily, comfortably, have a dozen people getting their dishes ready for a potluck lunch, heating here, warming there, washing a dish or two, getting down a serving plate or grabbing some spoons. All without banging into each other. 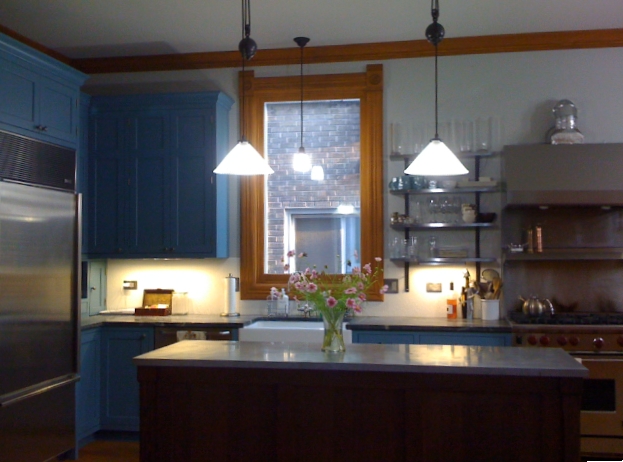 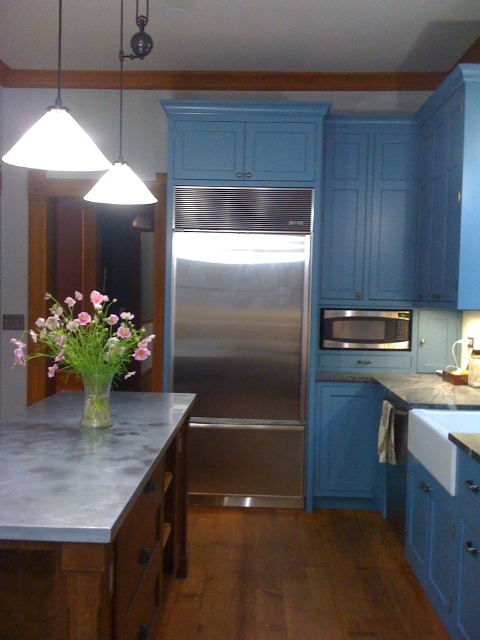 It's sort of funny, given that Kevin isn't really a super-social person, and I'm the one who entertains a lot (often with him avoiding the whole thing and hiding in his office upstairs) -- it's just a great gift to me, that he was so careful with the measurements. Thanks, sweetie!

The kitchen is almost done -- the main thing left to do is run the anaglypta all the way up the wall (I don't like the way we have it now, cutting off at backsplash height) and paint it a soft off-white (F&B's Blackened). We may also replace the anaglypta right behind the sink with something else, because that is getting splashed. Stainless, probably. We also will probably at some point build a stainless frame around the stove vent thingie, because the bits of duct tape currently visible are not so lovely.

And that may be it. We'd originally planned to do stained glass in that big window, but I don't know -- the industrial brick of the building next door has kind of grown on me. We'll see -- the budget isn't going to allow for stained glass this year anyway, I think, so we might as well live with it a year and see what we think. I do love the way the open shelves turned out -- the one on the left is our everyday use shelf, and I really do use the stuff on there pretty constantly. The one on the right is my Sri Lankan shelf; I use those spices about once a week, and in the meantime, aren't they pretty? I also love the collection of Sri Lankan cooking implements and trays up top. White elephant teapot from Whole Foods, a gift from Roshani. 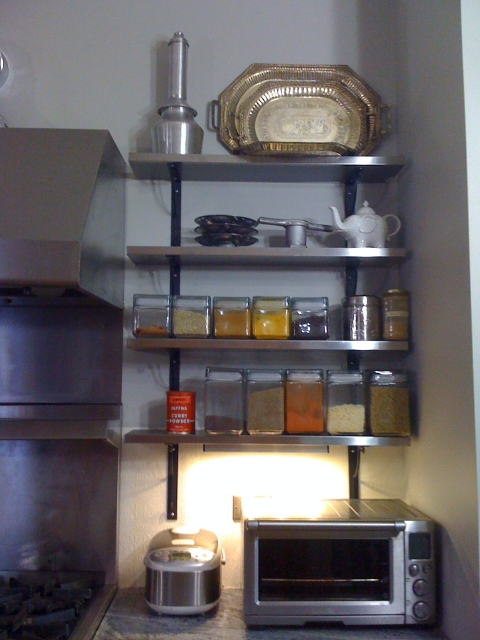 The eat-in area is one of the last areas that still needs to be built in the house -- I'm hoping Pam can get to it soon. We decided to build up the wall in back, for safety reasons. We were originally going to put a set of long pots there (secured to the wall below), or a metal grate (which would have been more open), but recently decided that if we're going to need something there anyway for safety (so the kids don't stand on the bench and topple over onto the hard slate of the mudroom a story below), we might as well build up the wall and then make the seat back go up higher, for maximum comfort while sitting there. It may not be quite as pretty, blocking the view of a bit of transom window over the back door, but sometimes comfort and practicality wins. And so they should. 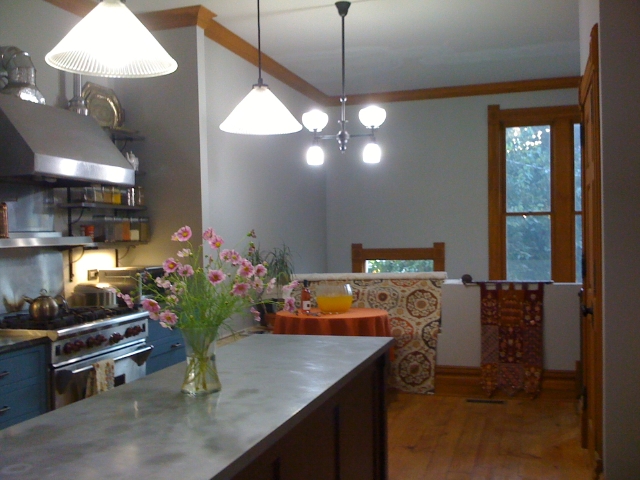 That's the fabric I'm going to staple-gun to plywood frames for the backs, and sew into seat cushions. It's cheery; since this area is mostly for the kids, I tried to pick something they would enjoy. They like lots of color. And I think the tones are still muted enough to blend with the kitchen's greys and blues. 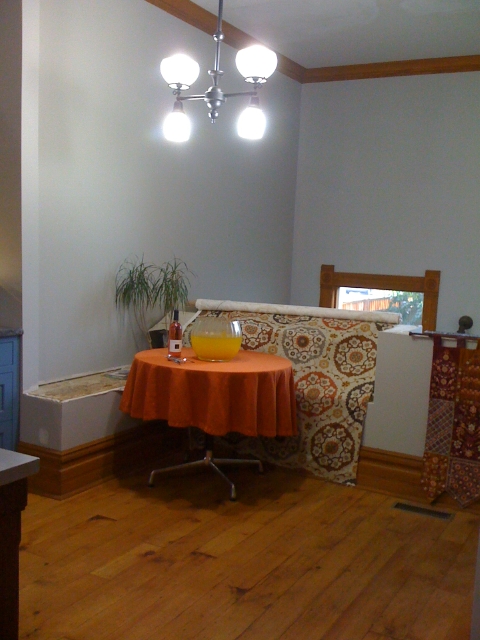 Flowers courtesy of Saturday's farmer's market. Aren't they totally charming? I'm not sure what they are -- cosmos, maybe? Love them. 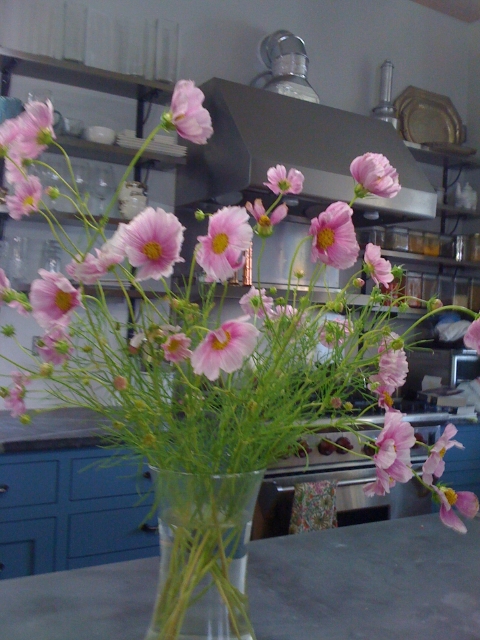 1 thought on “We had the Sri Lankans…”