Menu
It's a little sad that it's taken me until today to post the photos from two weeks ago brunch. I was tempted to skip blogging it altogether, except that I do want to record the occasional peaceful, lovely moments in what can often be a fairly hectic life. For example, remember that tray I picked up at IKEA last week? It turns out that it's a nice place to hold vases as you're arranging the flowers you've picked from your garden: 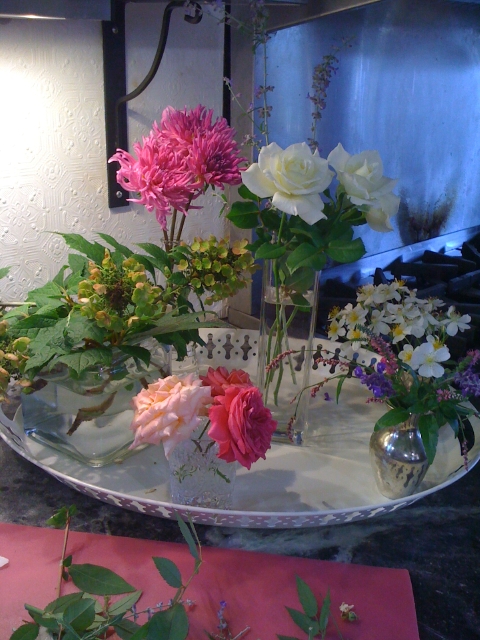 They didn't stay like that, of course. They were distributed all over the house. David Austin roses in a tiny glass on the windowsill in the foyer: 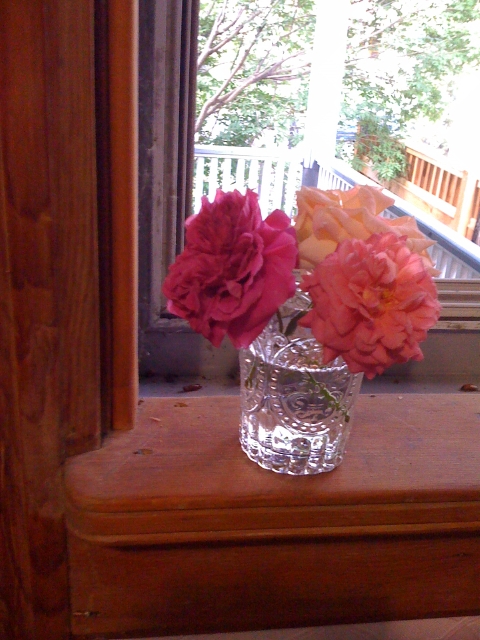 Claudette dahlias on the dining table -- and that reminds me, I'm not sure how well I'm going to do at digging up my dahlias and overwintering them, but this one is providing such wonderful late summer color in my front garden that I'm clearly going to have to add at least a few more dahlias. And they make great cut flowers. I also like the way these are echoing the colors in Satya's painting in the hallway, and how all that plays off the aubergine walls in the dining room. 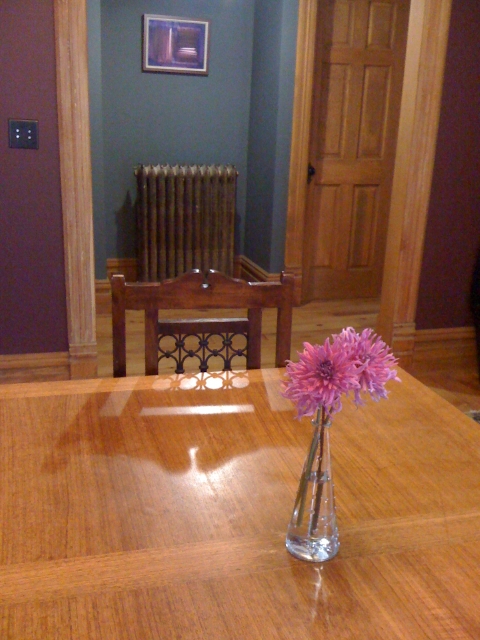 Roses and Russian sage on the mantel -- and isn't it fun how Victorian that assemblage looks? The heart of it is the glorious sextant Minal brought me from India, which the seller claimed had fallen off a British tradeship off the coast of Gujarat. But I also quite like the tillandsia sitting in a mercury glass bowl, and the little water spritzer that keeps them happy. In theory, air plants can live off the moisture in the air, but I think Chicago is a little dry to pull that off successfully. They seem much happier when I actually give them a bit of water once in a while. 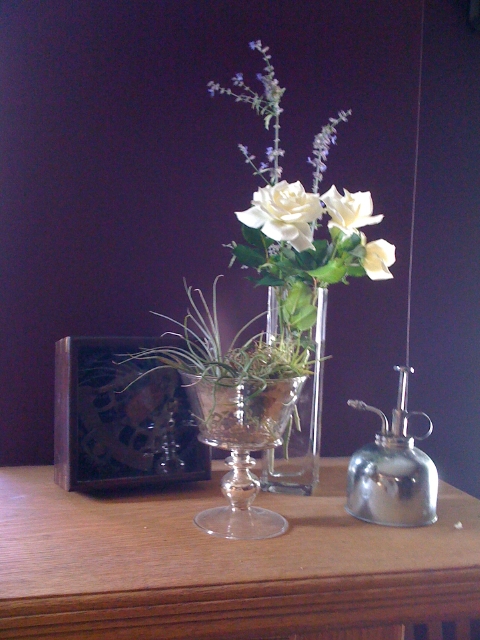 Another view, this one with the window I made. That stained glass store, Two Fish closed this summer, a victim of the recession. I had another window half-made there; I don't know what happened to the pieces. It's sad. At some point, I suppose I'll go looking for another place to take classes, but I liked the owners at Two Fish a lot. A real loss to the community. 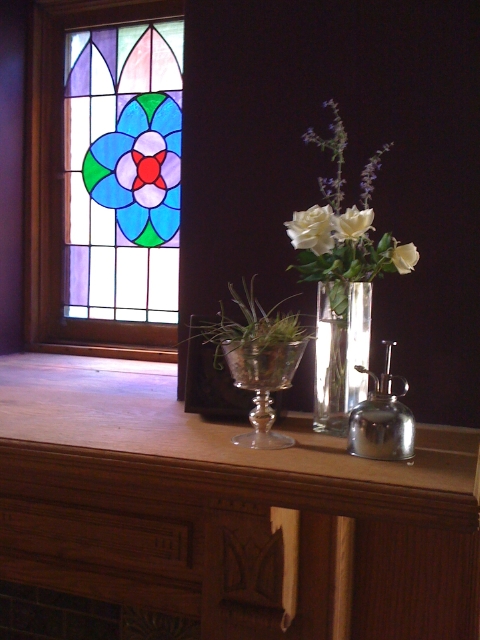 Perhaps my favorite arrangement was this one for the powder room -- veronica, sage, some pink wildflower / weed that's popping up all over my yard, and a little Darlow's Enigma rose. It lasted the longest too. 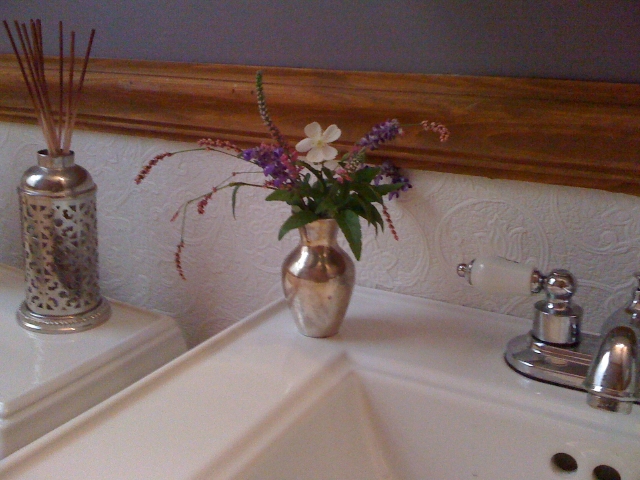 And of course, all of this was in service of food (an arrangement of crepe fillings, and the crepes to go with them)... 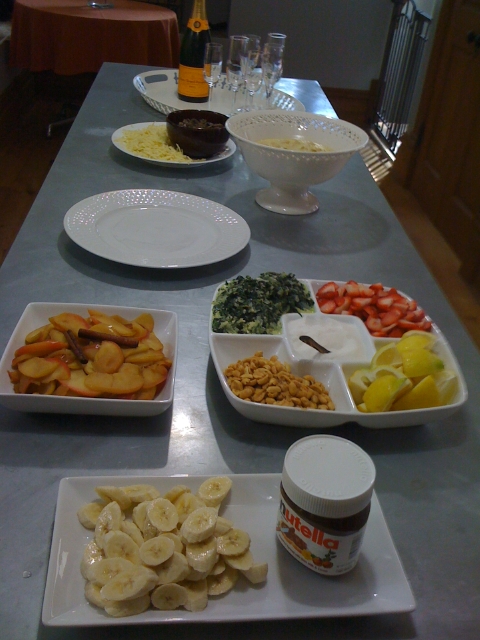 ...and friends. (Anand and Griffon, on our main stairs.) 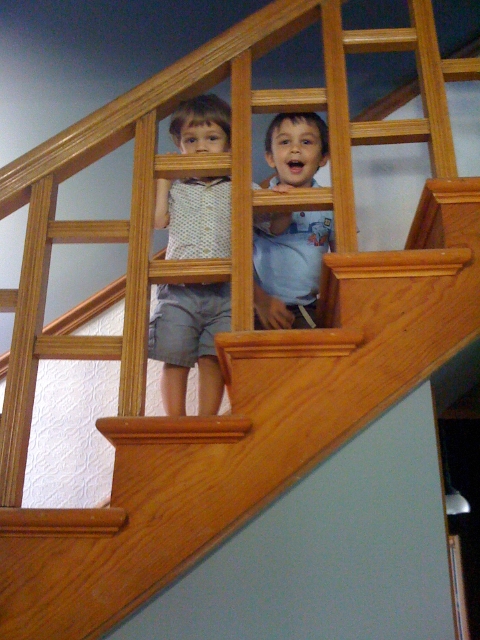 Afterwards, most of the fillings had been eaten, but there was lots of the apple cinnamon stuff leftover, which I was okay with, because it was truly excellent on ice cream for the rest of the week. Mmmm.... 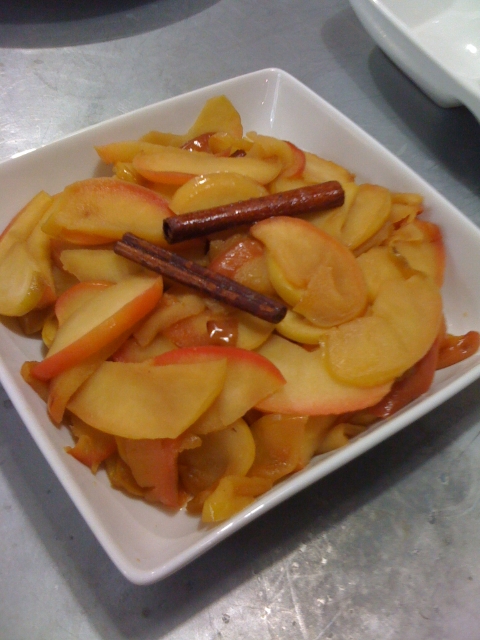 Flowers, food, and friends. Occasionally people ask me why I entertain so much. And I don't know what to say to that, because the answer seems so obvious to me. This Sunday, I'm hosting a completely different sort of brunch, the local Sri Lankan potluck gathering. Lots of curries and brown people. I expect it to be splendid fun. :-)