Facebook Instagram Youtube Twitter Patreon Shopping-bag
Menu
I'm having hosta issues. A neighbor gave me some hostas (aka plantation lilies), which I took three days to put in (blame ThinkGalacticon and a S. Asian lit. conference where I had panels at both on the same weekend), and they suffered mightily. They're in the front corner of the yard, which is pretty shaded by a big tulip tree, although tiny bits of sunlight do peek through the leaves. The two striped hostas seem to be mostly-recovered; the two green ones are still kind of wilty, but alive. I think they'll make it, which is a relief; I would have felt very guilty if not, since they were a gift.

I was very anti-hosta when we first moved to Oak Park. I do not love the way many people use them here, twenty or more hostas, all the same variety, plopped down to cover the shady part of the yard where they can't get grass to grow. It just seems dull to me, although I realize this is a matter of taste. The Victorians went through a period of adoring bedding plants, those big flat expanses of impatiens or the like, and many people are very fond of neatness and symmetry. It is not my thing, but I acknowledge that de gustibus non disputandum. (Not sure I folded the Latin into that sentence correctly, but you know what I mean.) I do want structure in a yard, and a little formality to balance the wildness. But some people take formality to an extreme. IMHO.

Okay, so that said, hostas are growing on me. They are lush, they seem to be easy-care, they come in lots of varieties of color and size, and even when they're not blooming, they're rather pretty. And I've seen some photos of hostas in the woods, intermixed with other plants, and I rather love them much in that setting. And while my yard is not a woodland, I think it might work to have the little front left corner under the trees in front act a little bit like a woodland. Maybe? And then as you go back and to the right, to where it is very sunny and dry, slowly transition to more prairie-style plants -- russian sage and meadow sage and salvia and the like. And then back from there, into the sunny side yard, the rows of rose bushes flanking the path. (See, I like a little symmetry too.) Will that just be very incoherent, or would it be okay? 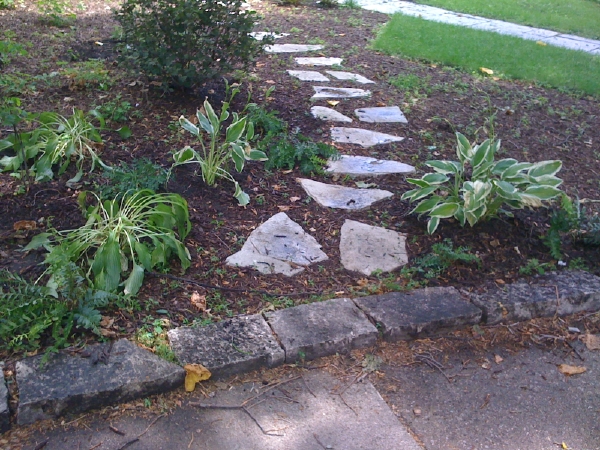 Anyway, for making a woodland intermixed feel, I went to the garden store this morning and picked up three ferns and three Jacob's ladder, as well as a single tall meadow rue, which is lovely and delicate and is hard to photograph but looks very nice up against the fence. I was tempted by Japanese painted fern, but went with Christmas fern because it apparently stays green in winter, and it'd be lovely to have some winter interest in my yard; that's going to be an overall challenge. I do like maidenhair fern as well, so I might spot a few of those in eventually. And I have a lungwort elsewhere in the yard -- I might get a few more and move them all into this area. 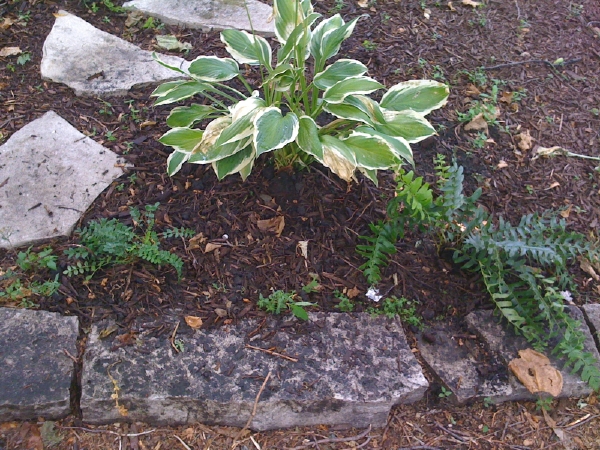 But I'm worried about spacing -- am I crowding the hostas too much already? I'm not clear on how big everything will get. I suppose if it gets crowded, I can pull things out and move them elsewhere? Am I being overly blas about the ease of moving plants a year or two down the road?

I'm wondering if I should put in some heuchera too, or just stick with those 3-4 plants and add more varieties of them. I'm not sure I love heuchera, and there are many more hosta possibilities, it seems, even if I stay away from the yellow-y ones (because I'm going for a cool color-scheme in the front). There are so many varieties of hosta, and so many possibilities for hosta companions, that I'm getting a little overwhelmed. I want variety and a woodland feel, but not total chaos. I think. Is that what it would look like in an actual woodland, or would plants cluster in areas, and transition from one species to another as you walk?

A little further up (and slightly sunnier), there's five bleeding hearts, and then across the way, three astilbes (whose flowers are now looking all dry -- did I underwater them, or are they just done for the season?). Any suggestions for what to mix with those? Should I mix the bleeding heart and astilbe together, or keep them separate? Should they mix with the hostas too, or transition into a separate area? 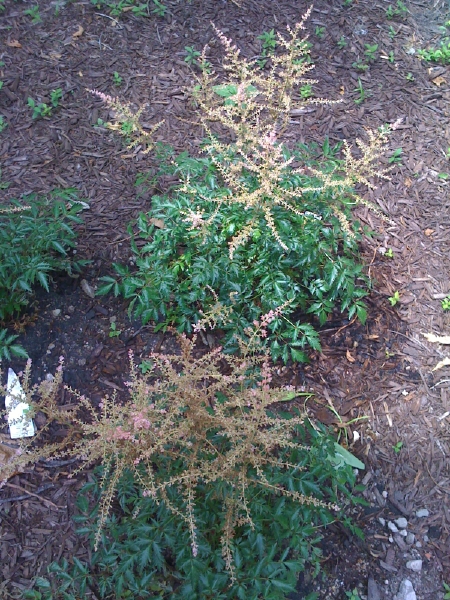 4 thoughts on “I’m having hosta issues….”