Facebook Instagram Youtube Twitter Patreon Shopping-bag
Menu
We didn't lose power (like much of the Chicago area), and we didn't get flattened (as some Midwest houses did), but yesterday's storm was pretty damn dramatic. The sky went almost black, the trees were whipping around like mad; I called the kids over to the front parlor windows to watch. I almost didn't take them to preschool because I was worried about driving even ten blocks through that weather, but after about ten minutes it eased up enough that it seeemd safe enough. After work, here's what I came home to in my front yard: 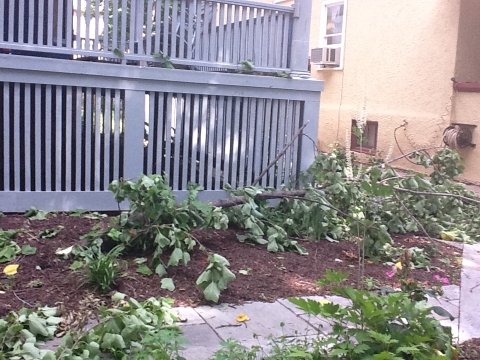 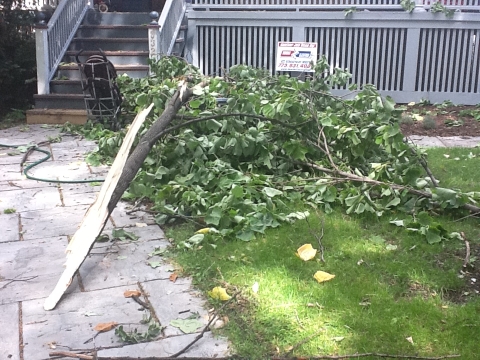 Dude. It was not easy to drag that thing to the curb, let me tell you that. And after at least an hour of picking up sticks, there are still more sticks to go. Despite that, we had basically no actual damage, not even to plants, which is sort of astonishing. I spent a while cleaning up this morning, then this afternoon, finally managed to plant the hostas that Rachel B. gave me.

I'm really liking this whole neighborhood thing -- I found Rachel on the Oak Park village gardening forum, and she'd volunteered up some hostas she was dividing, which I gratefully accepted. I went over Friday morning with a spade, which it turned out I didn't need, because she had a forged spading fork, which was a much better tool for the job of digging perennials, shrubs, small trees out of the ground. I don't need one yet, but someday, when I have an established perennial garden, I will want one. She basically dug them out for me, though I did help. And I came home with four big hostas -- two solid dark green, two with a white stripe on the outside.

This afternoon, I planted them, while Anand hung out with me. Eventually, Kev and Kavi came out and helped me clear some more storm debris. It was sweaty and satisfying and even kind of fun. House, garden, good. And while I'm sorry for the people who lost power (or houses!), I am really glad to be back in the Midwest where we have monster storms. They are kind of fabulous.