I ran across an interesting post and thread on front lawns at Apartment Therapy yesterday, particularly pertinent since I just mowed my lawn for the first time last night (see previous entry for newly-added photo). It starts off as a rant against front lawns, but the comments do a great job of delineating the broad range of reasons why people do or don't do front lawns. Lawns can be fun for kids to run around on, if you have the right kind of block; my parents had a huge lawn, and it hosted many games of kickball and capture-the-flag. Front lawns can be fun for hosting birthday parties and other celebrations, if you have the right cultural background (it's mostly Hispanic folk in Chicago who do that, it seems).

Neither really happens on our block, in part because we're mixed in with apartment buildings and condos, and in part because most of the front yards are fenced off. You can see the yard through the black metal fence, but you can't wander in. That makes me kind of sad; when I was raking grass clippings last night, I chatted both with Linus and Anne from across the street (who were walking their dog), and with the mother of the woman in the condo across the street (with two small twin boys), who seems nice, and whom I would make more of an effort to get to know if they weren't in the process of trying to sell their condo and buy a house somewhere else. Sad.

At one point, I'd planned to fence off our front yard too, but now I'm thinking I would lose some of these neighborly interactions if I did. You can talk over a fence, but it's a little more difficult. If we do anything now, I'm thinking it'll likely be a little low sitting wall, making it even easier to hang out in the front yard. It'll be a bit odd if we do that, though, since the three houses across the street and the ones on either side of us have (or are putting in), 4' wrought iron (or aluminum that looks like wrought iron) fences.

In thinking about what we wanted to do with our roughly 40x50 front rectangle, I was heavily influenced by a book I read, Liz Primeau's Front Yard Gardens, which I may have mentioned before, but which I'm going to recommend again. It's the only gardening book I've read cover-to-cover, because it's told in stories; one front yard after another, and how the owners came to their decision to move away from grass. Well-written, occasionally moving, beautifully photographed, and very convincing!

She argues against lawns for most of the reasons others do -- it's a non-bio-diverse monoculture, sort of a dead spot, comparatively speaking. They often require a lot of watering and/or chemicals in order to keep them looking lush. Powered mowers are noisy. Lawns are cheap to put in (compared to perennials), but often end up costing a lot more over time. Etc. and so on.

We ended up with what Primeau calls a hybrid garden -- a small piece of lawn is retained, mostly for negative space to rest the eye, although our children and dog do like it too. (They like the neighbors' lawn better -- because it's bigger? Because it's been better maintained up until now? Because it's sunnier? I'm not sure.) We're not using chemicals to maintain it -- if it gets brown, so be it. We're using a small non-powered mower. We're also not sticking to just grass in there -- any low green grass-like thing is allowed to stay, so clover is welcome, for example. I'm not sure about dandelions, though -- we don't have any so far, and they may not be permitted. That's mostly because I'm sticking to a blue/pink/red/purple/white palette in the front yard, though a bit because dandelions do look messy. I want my yard to be full of green things and flowers, but stilll look organized. Neat.

Eventually, I'd like to mix some attractive vegetables into the front yard too, if I can find ways to keep the overall effect ornamental. Like these gorgeous cabbages and herbs (photo from a visit to the Chicago Flower Show a few years ago): 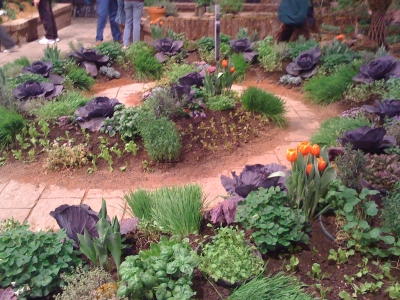 There's one house a block over where they've turned their front yard into a classic vegetable garden -- screened with chicken wire, laid out in rows -- and I admit, I don't really approve. I'm sure it's very productive for their family, and thereby eco-friendly, but it's just not pretty. I feel something of a social obligation to keep the front of my house / yard looking attractive; I want the neighbors to enjoy walking past. If the entire neighborhood subscribes to that, front yard gardening becomes an exercise in collaborative creation of shared beauty.

But that said, I also resist the expanse of carefully manicured lawns, just because it seems to scream suburban conformity. The pressure to keep your lawn looking lush and neat because if you don't, it'll drive down your neighbors' property values. It starts feeling more about money and less about beauty and shared community. Although I couldn't tell you exactly where the boundary lies.