Facebook Instagram Youtube Twitter Patreon Shopping-bag
Menu
I'm turning forty this year. It's only a month away now -- my birthday is July 26th. It's weird -- I don't think I'm having a mid-life crisis, as such, but I do feel something of a mid-life shift. And it's tied really tightly to appearance & body. Oh, I'm having a minor ongoing professional crisis, along the lines of 'why don't I have another book out yet, it's been six years now, what's wrong with me???', but that isn't really tied to turning forty. Just to time passing.

Small me. First communion at age 7, not sure on the other.

This year, there are two big appearance changes. One is stopping dying my hair, which I know, sounds sort of trivial, but I promise you it isn't. One friend said, when I mentioned the idea, "Are you sure? Do you want the kids at preschool to think you're Kavi's grandmother coming to pick her up?" And I admit, that gives me a bit of pause -- but on the other hand, technically, I'm old enough to be Kavi's grandmother. I've earned the grey hair honestly, though I wish there weren't quite so much of it. Walking down the street, I definitely feel as if people perceive me differently. My skin is still fairly unwrinkled; my face looks young-ish. I don't think anyone's actually thinking I'm in my 50s or 60s. But the grey is instant maturity. Now, there's not even a hint that I might not get carded when I buy alcohol.

And y'know -- it's sort of a relief. I'm ready, finally, to be perceived as a grown-up. It was sort of fun, five years ago, when people would mistake me for a college student, but it was also kind of annoying. It's easier to teach now, with grey hair; the students automatically act more respectfully. I think my colleagues might take me a bit more seriously too. And then there's the sex thing.

I'm having breast reduction surgery in mid-August. I'm sure it's going to be adjustment, going from the five foot tall girl with the DD's (or bigger, at various points), to a grey-haired, middle-aged woman with modest C's. But I'm looking forward to it. I had fun, going to Ren Faires and wearing the corset tops that shoved those huge breasts up and out; yes, I actually did wander around at one point balancing a big beer mug on my chest. The boys were amused. And I'm guessing those breasts got me a few dates I might not have gotten otherwise, so, yay.

But at the same time -- large breasts can be incredibly annoying. I developed them at age 9, and that is something I devoutly do not wish for my daughter. For way too much of childhood and teenagerness, I was the girl with the big breasts. I tried to dress to downplay them; the first time I took off my bra for a guy (or rather, let him, very clumsily, remove it), his eyes widened and he said, "They're huge." Umm...thanks, guy. Just what a fifteen-year-old insecure girl needs to hear, although I suppose he might have considered it a compliment.

Large breasts are defining, in an irritating sort of way. They also make it hard to shop, because you have to buy one or two sizes bigger on top. They make it hard to run, unless you want to bind them down tightly, and even then, they hurt. For the past several years, they've contributed to increasing back pain. And I am just so excited to see them go. Honestly, if the surgeon were willing to take me down to a B, or an A, I would seriously consider it. He won't -- I guess it's riskier to take out that much tissue. Oh well. The breasts have been fun at times, and they've certainly been useful in producing milk for the kids, but overall, I'd be just as happy to be done with them now.

Kev is a little worried about the surgery, though he's overall supportive of the reduction. There's a chance of losing some nipple sensation with the surgery -- one friend I talked to said she wouldn't risk it, for that alone. And maybe I should worry about that, but I just don't -- it's not enough of a concern to me to matter. Nipples are fun, but I'm pretty sure I'd still enjoy sex without them; there are other erogenous zones. Kev's also worried that I may feel negatively about my body after the surgery. It's possible, certainly, but I'd be surprised; I think it's more likely that I'll think my body looks better when it's not quite so top-heavy. More proportionate. And even if it does look worse, I think I'll be okay with it. It's not that I don't want to feel or be perceived as attractive -- I do. But it's not nearly as important to me as it used to be.

My 36th birthday, with Kavya.
At my sister's wedding, a year later.

I admit, I have my days of looking in the mirror and hating the way I look. Of trying on one outfit after another and despairing because I look horrible in them all. Look -- this top exposes the flab under my armpit. This one is too tight, and outlines the stomach roll dramatically. There are times when I am so frustrated at how difficult weight loss has been that I want to scream or cry. And recently I saw an interview someone did with me up on YouTube, and I actually couldn't keep watching past the first few minutes because I so disliked the way I looked. But despite all that -- I dunno. I don't get upset about that stuff nearly as often as I used to. And I think it's because a) I have some perspective on it all now, and remember that I felt exactly the same way when I was thirty pounds lighter, which suggests that a lot of this is in my head, and b) it just doesn't matter as much anymore.

Our society keeps telling us and telling us that we have to look young and beautiful forever. That a woman especially (although men get it too) should constantly strive to look like she's twenty, or younger. And y'know, I'm just not interested in trying anymore. It feels like a waste of energy. I'm glad I had a wild youth, that I sowed a lot of delicious oats. If I hadn't, I might be more frustrated or bitter about not having that now. But, y'know, I got around. And, granted, it's been a while since I really went out looking for people to sleep with -- it'd probably be a bit depressing, to see how much harder it'd be to pick up strangers now. But picking up strangers is not really a big part of my life these days. 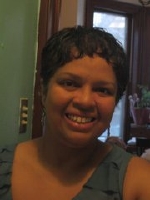 January-ish, right after cutting off a lot of hair, preparatory to going grey.
Wiscon, a convention shot I don't love, but one which does show just how much grey there is.

I guess, as I turn forty, I'm feeling less pressure to try to be beautiful and sexy all the time. I'm middle-aged! I can aim for hard-working, competent, reliable, accomplished. And those are not the most sexy adjectives, granted, but they actually sound really appealing to me right now. In my forties, I'm pretty happy having sex with the people who already want to have sex with me, just the way I am. And most of the time, I'd be at least as happy working, or gardening, or cooking, or playing with the kids. I want to get a lot done in my forties. And I want to do it with grace.

My twenties were fun and exciting; my thirties were a little frenzied and at times insanely stressful. I'm looking forward to this next decade as a time to consolidate my efforts so far, to enjoy what I've worked for, and to take it all further. To be a good mother, partner, friend, citizen. To teach my students with joy and excellence. To enjoy my beautiful home, and make it a welcoming haven for family, friends, community. To work hard at my writing, to try to make something brilliant and beautiful. And to live with integrity and passion. 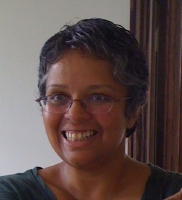 Photo from today. I like it, expect for the deer-in-headlights grin. Ah well.

10 thoughts on “I’m turning forty this…”