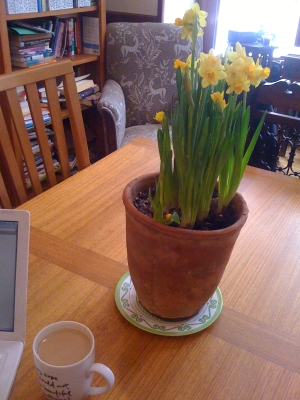 Our budget is looking a bit sad.

Not for the house, surprisingly enough -- we're still within what I'm going to call the outer limit of our renovation budget. When the house is done, shelter will be taken care of, but unfortunately, we still need to feed and clothe the children. Otherwise, the nice people from child services will come and take the munchkins away, so let us try to avoid that eventuality, shall we? We are quite fond of the monkeys, especially now that they mostly sleep through the night.

No, it's our basic annual budget that's the issue, the one based on our joint income. For the last three years, we went significantly over on that, digging into savings, and we can't keep that up. Admittedly, we were a little indulgent with the discretionary spending in the last few years -- we were so frayed with new baby and three moves and house uncertainty and sleeplessness. Ordering pizza, buying books and toys, and watching a lot of tv helped us all cope. Fair enough. But it's not a sustainable pattern going forward.

Mostly, I think it's the move from being DINKs (double income, no kids) to having kids. Childcare + food + clothing + toys have pretty much replaced all the money we used to spend on fun travel + computer games + books + eating out + etc and so on. I wouldn't go back, since we've traded one set of pleasures for another, but it's definitely a financial adjustment, and somehow I haven't made the mental shift yet.

Some of this year's costs are one-time expenses, hopefully. I lost 30 pounds and went down 2-3 clothing sizes last year; basically, nothing I owned fit. Not even shoes, because I gained a permanent half a shoe size with each pregnancy. (Disconcerting, having your feet get bigger! I didn't know your bones could spread like that.) So I had to buy pretty close to a complete new wardrobe, to keep my pants from falling down in the middle of teaching. I'm not expecting that to happen again; while I'd like to lose a few more pounds, I suspect I'm pretty close to my base weight going forward.

But in general, we're trying to cut back on everyday things. We're still very comfortably upper middle-class; all of our necessities are in budget. It's the little luxuries that are going. For example, we're now saying goodbye to:

All of those cuts are relatively easy and clear. They're probably not enough, especially not if we want to pay for music classes and soccer uniforms going forward. And some of our other indulgences, I'm having harder time saying goodbye to. For years, I've bought fresh flowers at the grocery store every week. It's only $10 / week -- but that adds up to $500 / year, which is significant. They make me so happy -- do they need to go? I don't know. See my little daffodils? Aren't they pretty? If I buy plants in pots, repot them, and water them consistently, I can usually get two at least weeks out of them instead of just one. So shift to just having flowering houseplants instead of cut flowers? Hmm...that'd help, at least. But is it enough?

And what about the car? Our parking at UIC is expensive -- something like $2000 a year. Gas cost is pretty equivalent to train fare, and we're certainly in range for the subway. But Chicago is bitterly cold for much of the school year. Am I willing to give up driving into campus, when it'll either eat up an extra hour a day in transit time (for taking the train the long way, Green to Blue line), and/or involve an extra hour a day of walking (to the Blue line)? (The latter option has the benefit of getting my daily exercise in, but so cold.) It'd help a ton with the budget, but it'd be hard. I hate the cold SO MUCH. And it's something we have to just decide at the start of the school year -- are we buying a parking pass or not? And then live with that decision.

Oh, and the garden. Our yard is a barren wasteland still, and is desperately in need of some shrubs. But those are not free. And we'd hoped to grow vegetables (which will help a little with the grocery budget, but probably not as much as they cost to grow). We've never started a yard from scratch -- how much is a realistic garden budget? I don't know.

Part of the problem is also that while I still sort of expect to sell more books in the future, possibly even books I have already written, I have NO IDEA when / if that will happen, or for how much. Could be $5,000 next year, or $50,000, or $0. Nada, zip, zilch. So we can't count on writing income in the budget at all, which is deeply frustrating and sometimes makes me question the whole idea that I can call still myself a real writer. But that's sort of a separate, if related, issue. Argh.

I don't expect y'all to solve any of these problems for us. :-) Just thinking aloud about which domestic economies are easy, and which are hard. Have you guys been cutting things this year? What little luxuries would you find easy to give up? What would be hard? Any tips on easy ways to save money? (Other than, y'know, NOT taking on a massive renovation and addition project, 'cause that ship has most definitely sailed. :-)