I am knitting, though I haven't talked about it in months -- that's mostly because I have four projects going, and none of them are close to finished yet. One scarf (Baktus) for me, one sweater (Owlet) for Kavi, one sekrit present (belated) for Sharmi and Ryan, and one sekrit swap project for a Ravelry Alice in Wonderland-themed swap. (I will take a photo of my swap items when assembled before mailing them off, because I admit, I think they are really cool.)

I am still a pretty slow knitter, I think. Maybe I need to try switching to metal needles, which are supposed to be faster. But I worry that I will just drop more stitches in my clumsiness. And I do love my wood Harmony needles -- they're so pretty, and they feel good in my hands.

Also, there has been a lot of frogging (ripping back, rip it, rip it), which has contributed to the slow progress. I have a bad tendency to pick up a project after a month, think I remember what I'm doing, not bother really reading the pattern carefully again, and knit merrily on for many rows before I realize I'm doing entirely the wrong thing. 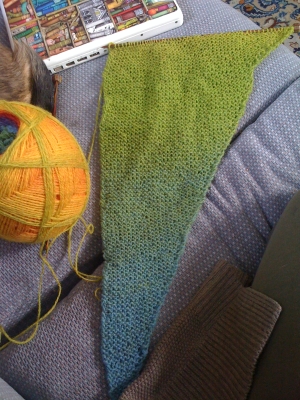 If you look at the top of the scarf pictured, you'll see that in action. I was increasing every other row, instead of every four rows. So I ripped all that back, and re-knit it. And then, when I was almost as far along, I realized that I was a) increasing in the wrong place, and b) wasn't knitting through the back loop of my yarnovers, and so I was making a whole bunch of unsightly holes at the diagonal edge of the fabric. Argh. So I ripped it back again. There are now about twenty rows of that scarf that have been knit three times. But at least it looks right now. So it goes.