Day two of Capricon was busy. I haven't been going much to conventions for the last few years -- I used to go to one every few months. And they're great, but they also eat time -- I basically didn't get to do anything yesterday except the convention, and I have SO MUCH e-mail (some of it urgent) that I really have to get through. This afternoon, hopefully, I can at least respond to the urgent mails. My schedule for this morning is watch the kids 'til 8:30, get dressed, leave at 9 to drive up, be on my panel @ 10, drive back down, meet Pam @ 12:30 at an open house to check it out for a friend who doesn't live in Oak Park but I'm hoping might move here, meet a Northwestern student @ 1:00 to be interviewed, and then come home. After that, it's just splitting childcare and housework with Kev for the rest of the day, so with any luck, I can find some e-mail time in there. Although the house also needs deep cleaning. Ditto the children.

My panels went well yesterday, and I had some nice conversations with people. I spent some time with John Picacio in the art show, talking about his work, which was really interesting. I hadn't realized that he'd done this cover for Zoo City in response to the whole flap over Justine's Liar cover -- good for him. And that's one of his at right, "The Thirteenth Reality," a cover he did for a YA fantasy novel. The final cover had a lot more color in it (he does great things with saturated color), but John and I both really like this more monochrome version -- that scarf totally pops. I would be delighted to have him do the cover of Rasathi. :-)

I read the opening scene to Rasathi during the Broad Universe rapid-fire reading -- there were only four of us, so I had fifteen minutes to play with. Hooray for Broad Universe -- if I actually publish this book, I'll have to join again. It read well! The audience laughed a lot, which is great, since I'm always uncertain as to whether my sense of humor is likely to come through (and be funny to other people). I wanted that opening scene (which is sort of an homage to the opening chapters of A Wrinkle in Time) to be charming and funny, with an undercurrent of tension, setting up the magic to come. I think that works. I also wanted to be sure that the magic showed up early enough in the book -- it's about ten minutes (1200 words for me) into reading out loud, which felt like just about the limit, I think. I suspect if I'd read aloud for twenty minutes, and still no magic, my audience might have started to get impatient. Interesting.

One of the panels I was on was about introducing kids to SF/F, and there were two YA girls (ages perhaps 13 and 16?) in the audience whom we ended up pulling onto the panel. They were so sweet and smart and articulate and enthusiastic about the books they loved (and vociferous about the books they hated, including Twilight, yay) -- it just totally charmed me. I so so so want this book published, so hopefully, girls like these can fall into it. Girls like the girl I used to be.

One last thing. After the panel, a woman came up to me and gave me a sketch she'd done of me while I was reading. I LOVE it. Her name is Siobhan Murphy, and she may be a lawyer by profession, but she also has some serious artist talent. So cool. 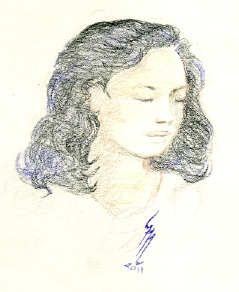