I found it because I started looking for tree beds, when I realized my original canopy bed plan might not work. I'd planned on a canopy bed in our master bedroom, because I find them insanely romantic, and also very Sri Lankan in feel. Check out these Indian beds from Taschen:

I wasn't going to do anything as fancy as the first (and I wouldn't actually like the second, because the mosquito netting comes too close to your face when you're in bed) -- just a normal four-poster bed. But I just realized that a typical four-poster bed won't work, because the bottom left corner post would directly block Kevin's view of the TV, especially if there's fabric around it. We don't typically watch TV in bed these days, but I think that's mostly 'cause we're too exhausted, and just collapse into sleep as soon as we go to bed. Hopefully that condition won't last, and at that point, we might want TV again. Especially since we're not going to have a TV on the first floor (eep). And especially when someone is sick. TV is great for that. So no canopy bed.

I was sad to give up my canopy bed.

Then I found this canopy option (all following pics courtesy Apartment Therapy):

Do you think a version of will work? I can have the bars mounted permanently above the corners of the bed, and run the drapes back along the sides to frame the head board most of the time. That would mean not having mounting brackets halfway down the sides, though, as most of these seem to have. Would it be secure enough without those? (Would we have to cut holes in the ceiling to make sure there was wood for the mounting hardware?) I'm happy to just use lightweight sheers. I guess alternatively, I could have the mounting brackets, and just accept that I'd only be running the curtains halfway up the bed, which would still give something of a feeling of enclosure. 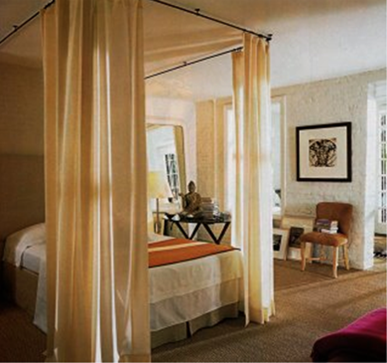 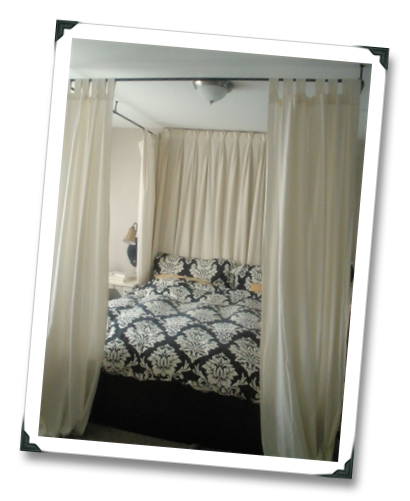 Or perhaps, you'd just mount two bars, one on each side? I think that's what they did here (Domino). I don't need it to fully enclose -- I think even having some fabric on each side, coming up halfway, would do a lot to give the feel of a canopy bed. And this one is so insanely elegant.