Facebook Instagram Youtube Twitter Patreon Shopping-bag
Menu
Hey, you folks remember that I bought a shisham (aka Indian rosewood) desk from Nadeau a while back? (Nadeau is that store in Ravenswood that does remarkably affordable solid wood imports from India and Indonesia.) Also Kavi's canopy bed, our front hall bench, and my big yarn cabinet.

We need new dining chairs (ours are dying, after a decade of hard use -- one actually collapsed under a guest at a dinner party last year; embarrassing!). Nadeau's gotten in a new shipment, and out of that, I've just bought two chairs for our dining room. They're actually in the same style as my desk (although my desk will be in another room and on another floor entirely), crafted of solid shisham with metal strapping accents. I love the simple jali work detail on the backs of the chairs; it looks both S. Asian and medieval to me: 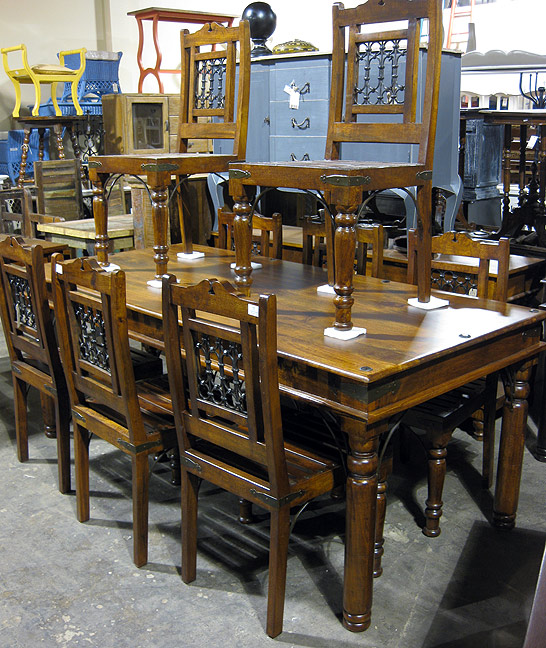 We want to do a mismatched style for our dining room, collecting various cool pieces as we find them. A big wood table, probably one that seats six normally and expands out to twelve. Not too glossy -- the kind of thing that can take some kid-pounding and scratches without looking ruined. And a bunch of cool chairs. Now we have two of them -- at $108 each, I think I got a pretty good deal.

Ideally, I'd also like to have two upholstered chairs with arms, comfortable enough that both Kevin and I could sit there for hours working; the dining room is going to be our main work option on the first floor, I think, and will probably end up with more bookshelves than china cabinets, so that it has something of a library feel. Along with the two upholstered armchairs, maybe two upholstered chairs without arms, so that the kids can easily clamber in and out of them, and the table doesn't feel too crowded. Those should be a nice transition to the two wood chairs above.

I know mismatched dining chairs aren't everyone's cup of tea, but I have to say, I'm really excited about it. :-)

2 thoughts on “Hey, you folks remember…”