Facebook Instagram Youtube Twitter Patreon Shopping-bag
Menu
This house is a disaster, Kavya is still home sick, they're about to turn off our cable (phone/internet/tv) because we haven't paid bills in months (not for lack of funds, just gotten woefully behind on paperwork), and I probably should start cooking so I can eat something other than leftover sweets from Mirna's wedding. (Rich cake. Milk toffee. Mmm...)

But instead of dealing with any of that, I've been researching The Ramayana, because even though Anil and Vandana may be willing to reprint "The Princess in the Forest" for their anthology, I really would like to write them something new, and they've graciously extended the deadline a bit for me. Among other things, I've just read Anil's brief essay, Rendezvous with Rama (which makes me want to go back and re-read the Clarke novel, but another day for that...), which I liked very much. I'm a little obsessed with questions of duty / heroism / kingliness / etc., so I really enjoyed his meditation on how Rama is constrained / defined by those elements.

I'm supposed to be writing about another character entirely, Kaikeyi, Bharata's mother. So I'd best get back to researching her. But first, another wedding picture -- this is from the point in the reception where the bride changes into a red sari. Mirna's not actually wearing a sari; I think this is called a lehenga (skirt) choli (blouse). But similar idea. Kavi enjoyed throwing rose petals at the happy couple -- and so did I. :-) 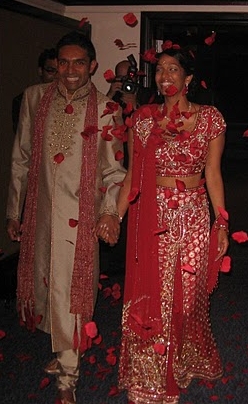