Menu
We have a house! It's official and final and we have all the paperwork duly signed by all the relevant parties. Whew! 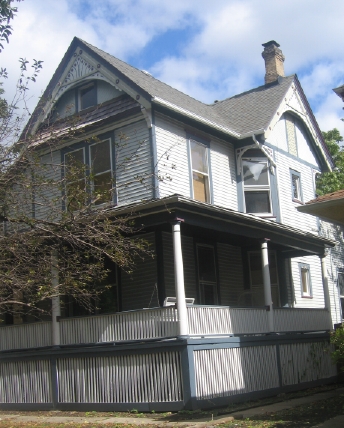 The purchase doesn't feel quite real yet -- undoubtedly because we aren't moving in right away. This 1886 Victorian house is in no shape for anyone to live in after foreclosure and a year of abandonment -- cracked pipes, etc. We could go ahead and get the minimum fixed and move in within a week, I imagine, but that's not the plan. Instead, we're meeting with quite a few contractors and architects in the next week, and hopefully within two weeks will have chosen a team to go ahead on a major renovation that will take at least six months to complete. You'll hear all about it, step by step.

It's going to be an interesting balancing act, trying to restore as much as possible of the historic nature of the home, while still maximizing its usefulness to us as a family. We met with two sets of people at the end of this past week, and have several more to go; I'm finding it really interesting and enlightening, hearing them talk about how they would approach the project. Among other things, we think we're going to abandon the idea of doing an addition, because a) it would be tremendously expensive, probably double what we'd be spending on the project otherwise, b) it would take longer, but mostly c) we don't think we're actually going to need the extra space, not if we can move a bunch of walls and stairwells around inside, and possibly dormer out some of the upstairs rooms, to make the attic and a tandem room more usable. Of course, we have to think about what's possible and how it'll affect the front facade of the house (which is the main thing the historic commission worries about; I gather you can generally do almost anything to the back). A few roof shots below, so you can imagine dormers on them: 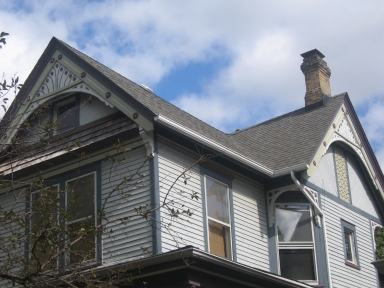 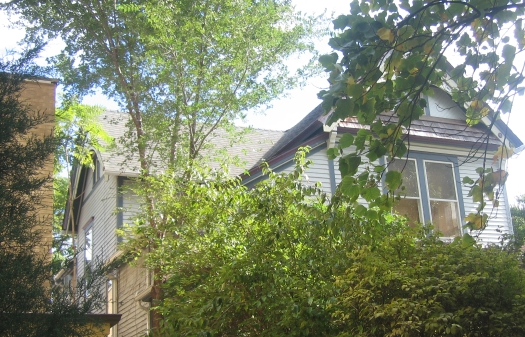 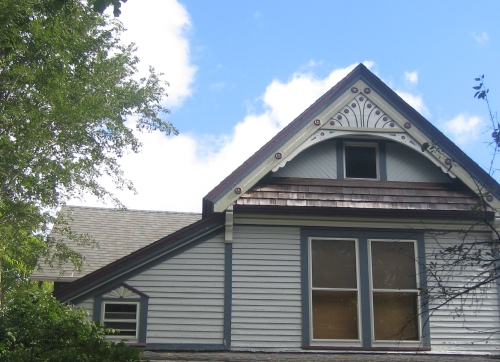 Isn't that detail on the front gable adorable? It's just so cheerful and charming.

Ideally, we'd love to add a turret (square? round? octagonal??) just behind that diagonal bit, but we're not sure the historic commission will approve that. One of the architects we're meeting with is on the commission, so I suppose we'll have a better sense of that next week. Our neighbors across the street did get permission to build one some years back, so it might be possible. We'll see. It's a lovely house they have -- their turret is so cute, and I'm very fond of the colors they selected for the house itself. 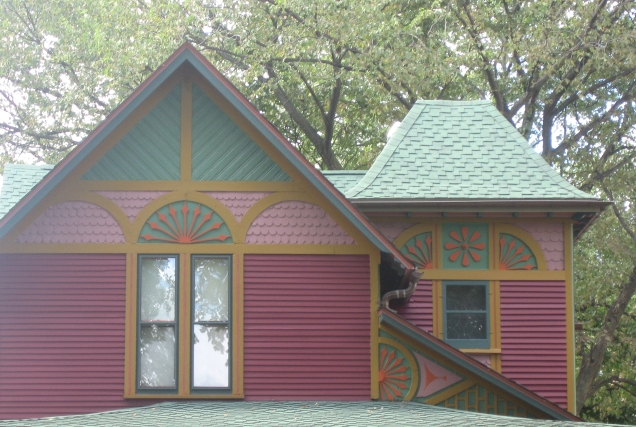 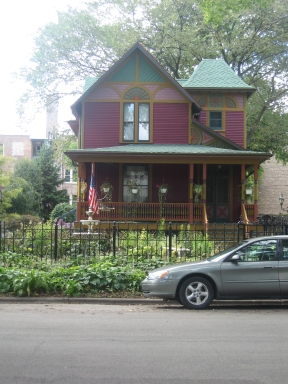 We're hoping to repaint our house in similarly rich and saturated colors, I think, but probably more in the blue/green/purple line. A project for next spring.

Those neighbors are a pair of doctors, which I have to say I find reassuring; it's just nice to have a doctor living across the street when you have small children, in case of emergency. Haven't actually met the wife yet, but the husband is awfully nice; we had a long chat the other day, and he not only said that he'd be happy to help us out with any home handyman stuff (he built the tower himself, with his dad, and has a fully-equipped workshop), but insisted on giving us a bottle of wine to welcome us to the neighborhood. So nice and neighborly; it made me feel like we'd made a good choice, buying this house. I'm really looking forward to having a community around us; I just wish I could pick up all our good friends and move them in next door...

It's going to be a long haul, I know, at least six months and quite possibly a year before we're actually living in our own house. But still -- it's very reassuring to finally have a permanent home. Yay. 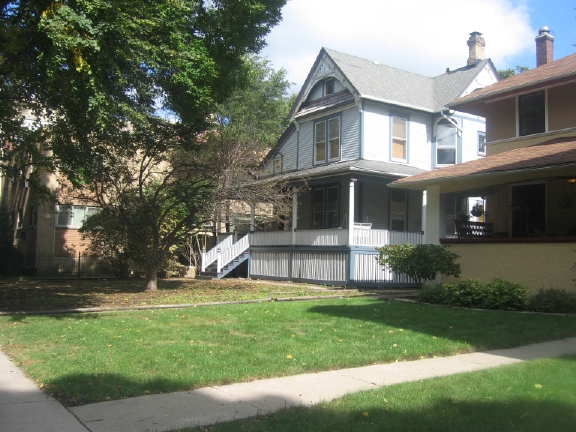