Facebook Instagram Youtube Twitter Patreon Shopping-bag
Menu
Saw a decent rental house today; going to look at a few more places on Monday, probably make a decision. One way or another, we expect to be out of Daniel and Anne's by next weekend, hopefully in good time to avoid me going into labor in their house. I'm at thirty-seven weeks now. Three more weeks 'til full-term at forty weeks. The plan is to give me until October 10th to hope to go into labor and try a VBAC; if it doesn't happen by then, then they'll do a scheduled c-section. My doctors think it's too risky to either try to induce (with pitocin) or let me go longer, given the previous caesarean; too high a risk of uterine rupture. So. I don't really want to go into labor this week, but anytime after September 28th or so would be great. Not that I have any control over that.

Poor Kavya has a bad cold; she's spent much of the last two days very listless, fighting a fever and a horrible cough. The hacking cough and consequent tears break our hearts, especially because there doesn't seem to be any cough medicine approved for her age group. All we can think to do is snuggle her and promise her she'll feel better soon. She even turned down ice cream at one point today. :-(

Here are some photos from a happier time; I'm not sure exactly when I took these photos, but sometime in July, I think, on my phone. (Hence the tiny.) This is in Wicker Park, where Kavi would have happily spent hours splashing me and Kevin with water from the fountain. She would have also happily climbed in, but we didn't let her try that. 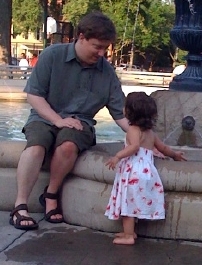 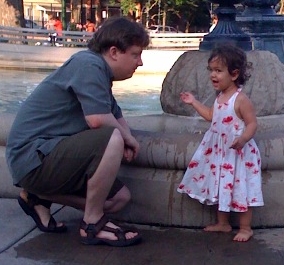 Hey, what's mama doing? Is she taking photos of me? 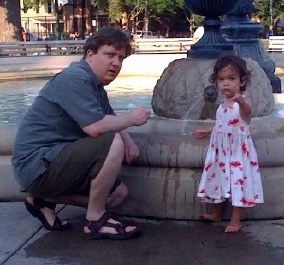 You're going to have to catch me first... 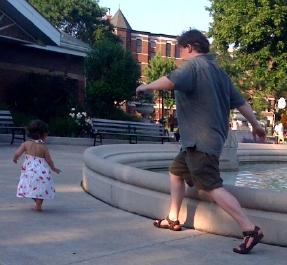 1 thought on “Saw a decent rental…”