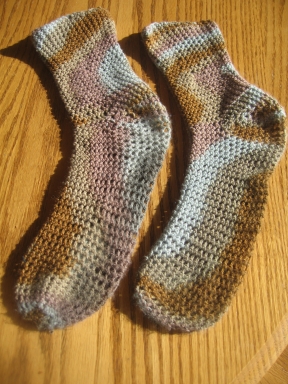 I picked this yarn because the colors reminded me of Kevin -- the blue of his eyes, the light golden-brown of his hair. I didn't notice all the lavender in it too, which makes the final effect a bit girly, but Kev claims he doesn't mind.

They were striping nicely the first time I attempted them, but about twenty rows in, I realized they were going to be too big, so I ripped it all out and started over -- to find that at the correct size for Kevin's feet, this yarn pools (makes pools of color) instead of stripes. A bit annoying, but oh well. As long as he likes them, we're good.

I was going to make a matching pair of baby socks for Kavi, which would have been so cute on Christmas morning, but I totally ran out of time. Sigh. I did manage to surprise Kevin because while he knew he was getting hand-made socks, he thought he was just getting the pair I'd made earlier. He didn't know that was just a practice pair! I love holiday surprises. He surprised me good last year, so this was particularly satisfying. 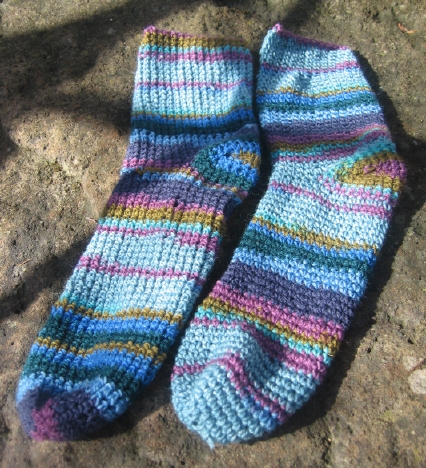 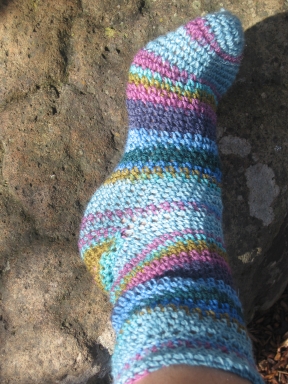 The socks I made for his dad were much more successful, but almost didn't get finished in time. I had gotten as far as 1.25 socks by the time I went to bed on Christmas Eve, and had resigned myself to giving Ron one sock with a promise for the second to be completed post-Xmas. But then, the Christmas spirit woke me up at 2:30 a.m., and finding myself wide-awake, I proceeded to get up and finish the second sock. Finished around 6:30 a.m., triumphantly, and even had time to wrap them before Ron woke up. Unfortunately, I had tried to make the tops a little tighter, so they would stay up better, and found that made them so tight that he couldn't get them on over his heel! So a bit of Xmas Day was spent unravelling and fixing the problem. But all was well in the end.

Next year, no holiday knitting/crocheting in the week before Christmas. If it's not done by a week before, it's not happening. Just too stressful! But it was awfully nice to give so many handmade gifts this year; very satisfying. And so lovely seeing both Kevin and Ron wearing their socks a few days later. Yay! I just need to start holiday gifts earlier next time around. September should be about right.