Facebook Instagram Youtube Twitter Patreon Shopping-bag
Menu
My first knitting project! Partly knit, anyway. This is Kavi's favorite doll, a 15-inch from HABA; she adores it and carries it everywhere. HABA does sell multiple outfits for her, but they're a bit pricey. So I thought I'd try my hand at making something instead. I happened to have some bright blue yarn that matched a pair of Lotta's shoes, so a knit winter dress seemed like a good thing to attempt. 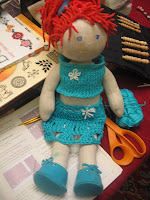 Casting-on was a disaster -- I tried the long-tail cast-on for about forty-five minutes, watching video tutorials and reading books, getting more and more frustrated, until I finally gave up in despair. Then I found instructions for crochet cast-on, which I managed to do in about two minutes. Lesson: stick to what you know.

Bodice: After several failed attempts I ended up giving up on the armhole idea -- frogged the whole thing, started over with separate front and back pieces, did knit and purl properly this time for a real stockinette stitch (I think, if I'm getting the terms right), which looked so much better than doing it all in knit. Front and back, knit in stockinette, about 20 stitches wide each, maybe 15 rows high; sewn together under arms and a few stitches above arms; embroidered lazy daisy in white. 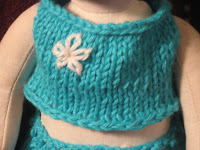 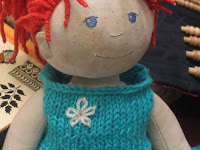 At this point, I was tired of knitting, and decided to do the skirt in crochet. I was going to attach it, but realized partway through that two pieces would allow for more mix and match with other dolly clothes, and also be easier to pull on and off.

Skirt: crochetet dc, tr (increase 1 ever 3 stitches), sc, tr, shell for final row, white yarn to tie woven through twice (alternating loops), tie in double bow and cut strands for starburst closure. Done loosely enough that I can pull both pieces on and off as often as needed. :-) 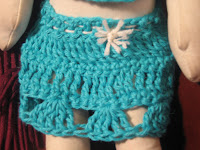 Sadly, Kavi mostly seems intent on getting the outfit off the doll right now, strongly preferring the store-bought clothes instead. But hopefully they'll grow on her. I think it's cute, and if we discount the time I wasted on the failed long tail cast-on and the repeated armhole attempts, the whole project was done in an evening, maybe 2-3 hours total, while watching tv. 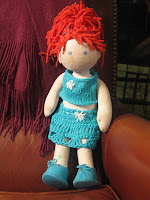