Facebook Instagram Youtube Twitter Patreon Shopping-bag
Menu
I should note that if it gets confusing reading The Poet's Lullaby out of order, or if you miss a few days, you can also read the whole story (as it's revealed).

I'm having some trouble keeping up with events here. I think part of it is that the yarn stuff takes more time to document than writing ever did, what with taking photos of projects, uploading them, editing them, posting them to various blogs and sites, etc. But I'll try to be better about the day-to-day recording as well. The semester's almost over, which should help.

I didn't even talk about what we did when Jed was in town. That Friday afternoon, I wrote half a new story, which I think might be good when I finish it. Not sure when that will be; I'm hoping to finish both it and AP by the end of the year. We leave for California on the 17th, and while there's some socializing to do, there will also be grandparents to help watch Kavi, so I actually think I might get a few solid days of writing in over the holidays.

Friday evening, we went to see a production of Dream, an Indian Midsummer Night's Dream. It was fascinating, the first multi-lingual production I've been too, with lots of long passages in Tamil (which I followed bits of), and several other Indian languages, in addition to the English. The play deserves a journal entry or even an essay of its own, especially considering the frustrated/bewildered/possibly racist comments of the theatre-goers seated around us. But I don't have the time/energy right now to do it justice. Sad. This was the last run; it's closing this week, or I would tell you go see it. Fascinating.

Saturday we mostly hung out, and watched the first few episodes of Mad Men. The show really is kind of depressing, but oddly compelling for all that. It definitely makes more sense if you're not coming in halfway through the second season. :-) Kevin tells me the writers were asked to do a recap episode of some sort in the second season, for new viewers, and they just refused -- would mess with the artistic integrity of the show. That makes me grin.

Kavi got to see snow on Sunday morning; she was not entirely impressed. Part of the problem was that it was slippery, and she kept falling, and since she was just out on our roofdeck, I hadn't loaded up her with the full mittens, etc. ensemble. Cold fingers! 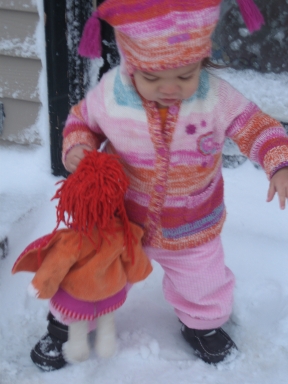 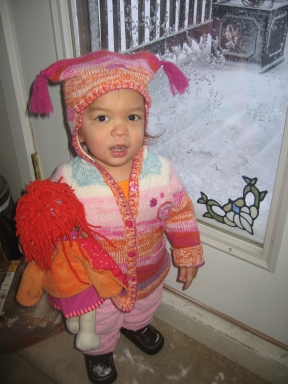 I think the real reason she kept falling was her starting to be ill, though, not the ice and cold, which she normally is much more oblivious to than I am. On Sunday night, Kavi got really sick. Much of the next three days have disappeared into a haze of Kavi getting what was either an ear infection or some really bad molar teething -- fever and uncontrollable crying at all hours of day and night, poor munchkin. Little sleep for any of us. We've been treating her per pediatrician friend instructions with alternating Tylenol and Motrin every three hours, which seemed to control her fever and pain reasonably okay, but she was still clearly miserable. She's hardly eaten in days (although thankfully is still drinking lots of milk), and we've allowed a lot more tv than we normally would, because it distracts her from the pain. She's gotten really good at pointing to the tv and saying, in a sweet, inquiring tone, "Bob? Caillou?" (The latter is a Canadian show about a four-year-old named Caillou; it's her current favorite.) Sometimes you can tell her Caillou is sleeping and she'll stop asking, but at other times, she's quite insistent. Maybe we shouldn't have been so eager for her to learn to talk...

I think she's mostly better now, if still a little lacking in appetite and tired. We've eased way back on the meds, and she seems to be doing okay. Which means we can concentrate on the madness that is end of semester. I'm bringing my kids samosas and sweets today; we'll have last class parties, fun. They hand in final papers and portfolios, and this weekend I indulge in an orgy of grading. With any luck, I'll be mostly done by Monday (although the creative writers actually do have until next Thursday to hand in portfolios, so we'll see how many choose to get it done and out of the way today).