Facebook Instagram Youtube Twitter Patreon Shopping-bag
Menu
Had a nice day yesterday. We met with another possible nanny-share in the morning, but it looks like we're going to go with the first family we met with. Angie and Tim have an infant (Gavin's just five weeks now, so tiny), and with them paying $7.50 an hour, and us doing the same, we can afford to go full-time with Jarmila. Which is obviously more work for Jarmila, but also more money; she'll be making about twice what she is now, which should help with the paying for grad school difficulties she's been having. Expensive for international students! We're going to do a trial run with both Kavi and infant sometime soon, see how it goes.

After the meeting, went off to hear Amitav Ghosh read at the CHF. God, he's smart. And funny. And he seems so happy in his writing and his life. He's my model of the kind of writer I'd like to be when I grow up. He was a journalist and an academic (has his doctorate), and is a parent (of two), spouse, and a solidly producing writer in a variety of forms. Love it! I'd hoped he might have time for tea after his session, but too busy. Oh well.

Met up with Heather and Aaron there, and we walked up to Frontera for a hurried but delicious lunch. Then back here, to meet with Simone at 2, where we worked through a bunch of tasks, including sending off some subs. "Jump Space" and "Talking to Elephants" to genre pubs, and a few others that I still need to figure out where they go. If there's time today, hopefully I can put together a list of potential markets for them so she can send them out. Did I mention that I like having a PA? So, so good.

After that, pretty much relaxed the rest of the day. Watched tv, finished crocheting the heffalump (a heffalump is a fictional, elephant-like creature mentioned in the Winnie the Pooh stories by A. A. Milne), progressed on Kevin's sock (the basic crocheted toe-up sock is remarkably simple, though I found the vagueness of the pattern intimidating at first), and started trying some little crocheted flowers. Very satisfying. I'm afraid Kavi is still completely uninterested in the heffalump. Oh well. "How sharper than a serpent's tooth it is to have a thankless child," as Shakespeare said. I suppose I should get used to it, eh? 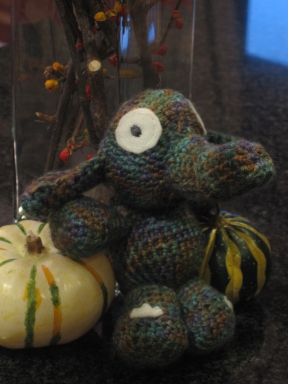 Completed, with jaunty scarf. He definitely has some attitude, I think. :-) 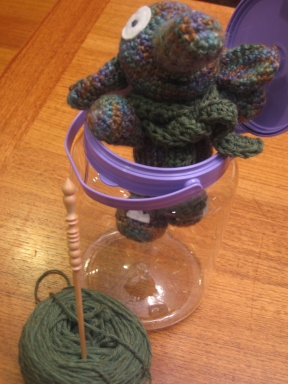 Now he just needs a name. Suggestions? He's definitely male, I think. And in honor of Milne, he must be British too...

(For the yarnies among you, I've collected all my heffalump crocheting notes at Romancing the Yarn.)