Yes, You Can Survive on Two Hours of Sleep a Night, Who Knew?

I Didn't Know It Was Possible to Shriek So Loud

Why I Should Get a Medal for Not Defenestrating My Child

Kavi was a champion through the departure from SFO, handling airport changing tables with aplomb, happily playing on a blanket while we waited for our flight. Many people told me how adorable she was, and I cheerfully agreed. 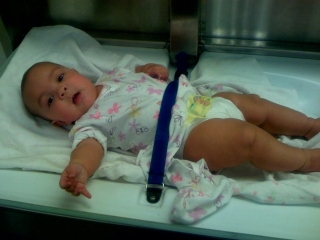 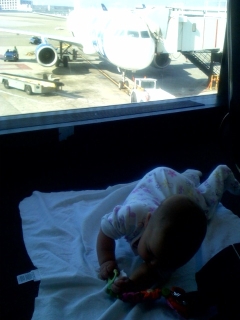 Then we got onto a luxuriously empty flight (note: United to Philly, lunch-ish on a Tuesday, not a popular time to fly), so empty that we had an entire row to ourselves!!! (Why yes, I do think that deserves three exclamation points. If you don't, you've never flown with an infant.) Kavi stretched out with a seatbelt around her waist, napped for three hours and played for two, and was generally pronounced a delight by all and sundry, including her mother. Even the tiny airplane changing table was only the source of mild complaints. She was a perfect angel baby. 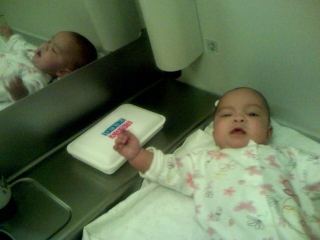 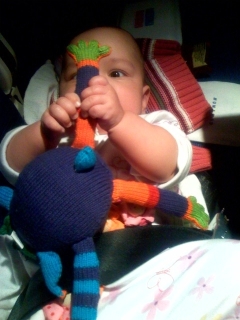 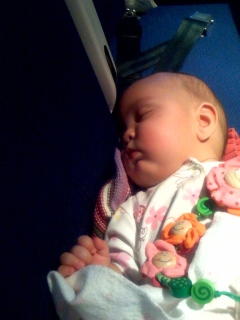 It was all a ploy to lull me into complacency.

Because that night, we arrived at Roshani's. We got in late, around 11:30 Eastern time, but luckily Roshani is on a late night schedule herself, in the eighth month of this pregnancy. So I ate some of her delicious rice and curry (god, that's good to arrive to after a long day of travel), and then we went up to the guest bedroom to talk. Since she has two other kids, she has plenty of stuff to entertain Kavi, including an exersaucer. So Kavi happily played while we started catching up; we haven't seen each other since Kavi's baby shower, so there was a lot to catch up on. 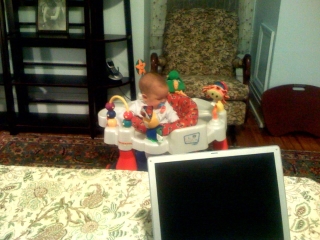 We talked for a while, and I started getting sleepy, and then something odd happened. Kavi started shrieking. Or maybe it was howling. No, I think hollering is a better word, Because she wasn't in pain, wasn't distressed, didn't appear to actually want anything at all -- except to holler, at the top of her lungs, and her lungs, let me tell you, are the lungs of a person four times her actual size. I don't know how she got so much volume out of there. And it wasn't just one little holler and then she was done, oh no. No, she hollered and hollered and hollered some more. She hollered for a good hour, while we closed the door and tried to calm her down and hoped she didn't wake the two sleeping kids or Roshani's poor husband. Just trying out her voice, was Kevin's explanation when I tried to describe the phenomenon to him, but he clearly didn't get just how very loud our little girl was. Roshani said she'd never met such a loud baby in her life. (Did I mention that Roshani is a pediatrician?)

I have no pictures of the hollering. You'll have to take my word for it.

Eventually, she did fall asleep, and Roshani went to bed, but I guess by that point I was so wound up that I couldn't relax properly. Because it took me hours to fall asleep myself, and then Miss Kavya woke up wanting to eat, and then I couldn't get back to sleep, and all in all, I had about two hours sleep that night.

Repeat, for the rest of the week. I was ready to kill someone by the end of it.

Oh, there were lots of good parts to the trip. There were. I love trains, and it was tremendously satisfying taking Kavi on her first train ride, watching the landscape whip past, the industrial surroundings near Philadelphia giving way to gorgeous autumn foliage as we headed deeper into New England. I meant to take photos of Kavi among the brilliant red-gold leaves, but it was just too cold outside, and I had forgotten her hat. Maybe next year. But at least you get to see her on the train; she liked sitting on my lap and looking out the window. 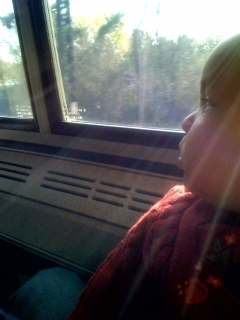 But even though the train ride itself was pretty good, just managing all the baby stuff was difficult. I was carrying a carseat and pulling a suitcase, wearing her in a Bjorn on my front with her diaper bag on my back. Roshani hung out for a few minutes when she dropped me off, long enough for me to get a croissant and some chai, but I only had time to sit and drink a quarter of the chai before it was time to board, and since I didn't have a hand free to carry it, I had to throw the rest away, which was very very sad. Especially because I was so damn tired.

I think I'd started coming down with a cold by that point too, which didn't help, but it was the almost-no-sleep that was killing me. It got increasingly harder just to do simple physical things like lifting my suitcase. People did help when they noticed that I was struggling, which I appreciated, but at the same time, I resented needing the help, because I knew that if I'd just gotten enough sleep, I would have managed just fine.

When we arrived at my parents' house, I thought I would be able to mostly rest during the days, but as it turned out, they had a big party for us to go to on Saturday night. And of course we hadn't brought suitable clothes. Between shopping for that (for me and baby), having relatives visit, and actually attending the party, there wasn't very much free time at all while I was at their house. They did love seeing her, and she was happy to go to them (though of course, they're older, and don't have the physical stamina to walk around carrying her for long periods of time). It was also nice getting dressed up and going out for a bit, especially since we got to see old friends of my parents whom I haven't seen in probably a decade at least. But I was so tired. 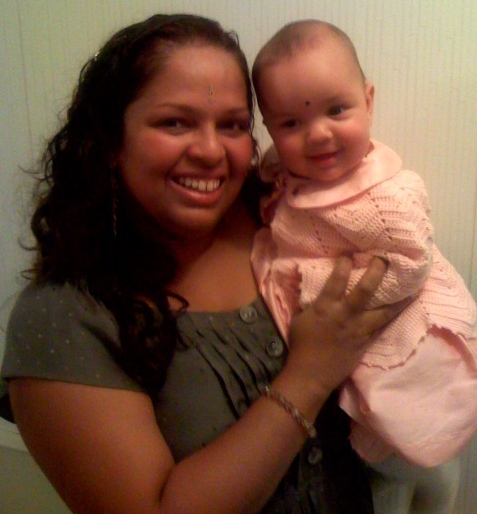 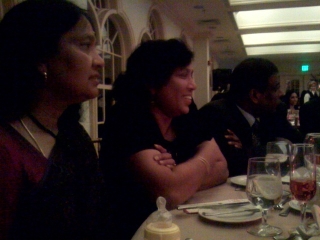 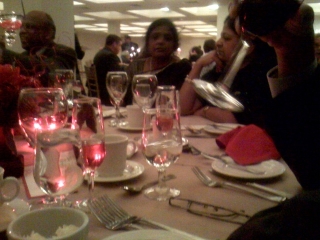 When I left Connecticut early Sunday morning, I was in a horribly foul mood. I snapped at my father a couple of times as he tried to get me to move faster out the door, and I resented all the extra time it took to take care of baby stuff (cleaning her, dressing her, getting her food ready), which could have been time spent sleeping instead. She'd actually mostly cut back on the hollering by this point, but somehow it didn't help. I was barely sleeping at all, and I'm still trying to figure out why. I have some theories.

I did manage to nap a tiny bit on the train back to Philly, enough so that I was in a decent mood when I got to Roshani's baby shower. I was too weary to carry Kavi pretty much at all, but we were at a house with many baby containment devices, so she was happy enough in the swing, in a play gym, etc. And there were lots of other moms there, one of whom held her while I ate lunch. I actually managed to have a good time and talked to some interesting folks (heard a lot of horrid but fascinating birth stories), so was glad I went.

Afterwards, I got some kind of second or third or eighteenth wind. Because when we got back to Roshani's house, Sharmi and Ryan arrived shortly thereafter for dinner, and Roshani and I managed to whip out four dishes in an hour and a half. She made amazing pork curry and a kale salad; I made potato curry and cauliflower curry. We served them with three small vegetable dishes my mom had sent along (eggplant, carrot, and snap peas), plus Marina's Aunty's fried curry rolls for appetizers. It was a veritable feast. 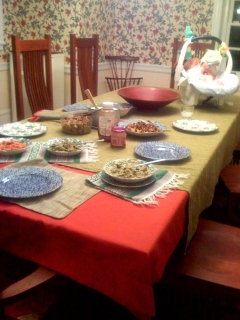 And we sat, and we talked, and we scared Sharmi and Ryan with stories about what life would be like for them when they had kids (they're recently engaged, getting married next October, and kids are probably years and years away, but still). It was great seeing them again, and it was a fun dinner all around. But it was a good thing I didn't have to do anything else, because I could barely lift food to my mouth. I didn't even take my suitcase back upstairs -- just laid it down in the hallway and got out the clothes Kavi and I would need for the night. I made Sharmi and Ryan run all kinds of little errands for me too, getting things I needed upstairs or in the kitchen. Poor things. But hey, they're young. And they don't have a hollering infant. You can tell, because they're smiling. 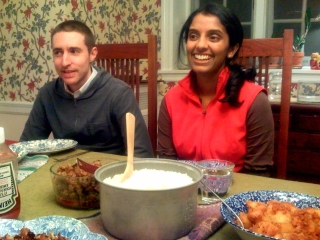 I called Kevin that night and just bawled. I could not believe how tired I was, and I really felt like I couldn't cope with baby anymore, but of course, I had to cope, I had no choice. I told him that I was never ever ever taking her away for this long without him again. A week was too damn long to do it alone. (Do you know, at one point, I was thinking about having a kid on my own? Hah! I am way too much of a wimp, apparently, to handle that.) He promised he'd be waiting at the airport, and I just had to make it through one more day without killing the baby. I said I'd try.

I slept badly for one more night, and then Monday morning Sharmi came by, and we swung downtown for a bit to visit two baby clothes/toy stores because they are irresistible even if exhausted (Children's Boutique was very pricey and offered mostly unexciting clothes (I did get Kavi a cool lunchbox though, which will serve to store toys for the moment), but Born Yesterday was really good -- also pricey, but lots of beautiful unique items). Then it was time to eat a last bite of leftover curry and go to the airport. In the end, I survived the trip home. Of course, this flight was packed, and it was delayed leaving, and it took an extra hour because of the headwind, so it was past midnight Eastern time when we arrived, and even later by the time we actually got home. Did I mention the bags took FOREVER to arrive? And when I got home, I was too wound up to go to sleep right away. Thank god Kevin had made me chicken tikka masala and rice; without comfort food to help me hold it together, I would have broken down all over again. It was three a.m. Eastern time by the time I fell asleep, I think. I slept six hours, resolutely ignoring all of Kavi's noises, letting Kevin deal with it all. Last night too. And I'm hopeful that with another night or two of six-hour broken sleep (the standard, since we got her), I'll be back to relative normalcy again, and able to cope with life.

I think the real problem was that it was just immensely stressful, having all the responsibility for her care. People don't hesitate to tell you when they think you're doing something wrong with your baby, and whether you agree with their assessment or not, it's upsetting to be criticized, especially as a new mom who is not at all sure that she isn't doing it wrong. Plus, I was constantly worrying in the back of my head that we'd run out of milk, or diapers, or clean clothes, or I'd lose her only hat (she did lose a sock in the airport coming home). She started eating an extra 4-6 ounces/day while we were travelling, which threw off all my calculations. But more than any real difficulty, it was just the mental stress, I think, of doing it all alone. Never again. Do you hear me? Never never never again.