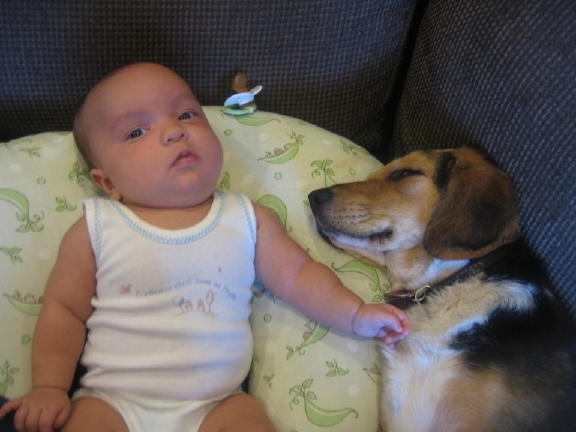 Pictured right: Kavi and Ellie share a boppy while they wait for their parents to finish all the frantic packing. They were very patient with us.

So we arrived safely in CA! Kavi and Ellie were both very good in the car (mostly slept), and the trip was in general smooth, although Kevin did get pretty sick at one point, probably from some bad Chinese food in Rawlins. Note to self: probably best not to get take-out Chinese in the middle of nowhere Midwest. We did the trip in four relatively easy days, with a nice long break in Salt Lake City, where we had dinner with grad school friends and stayed overnight with one of them, Jenn. Very lovely, and Ellie enjoyed playing in the fenced-in backyard with Jenn's four-year-old son, Paris (who insisted on feeding her many slices of bread. Happy doggy!).

We're now settled into Kevin's parents' house in Los Gatos, and since I have not yet sorted out my cell phone situation, I should let those of you who call me know that I can be reached at their home phone (which number you can get by e-mailing me). The tentative plan is to be here Fri - Mon most weeks, and in Oakland Tues-Thurs. We probably won't have a land-line in Oakland, so until I have my new cell, stick with calling me in Los Gatos, please. They're only here on weekends, so do feel free to call me here during the week (or on weekends, for that matter) and leave messages if I'm not here. Their house will also be our mailing address in CA. They don't have high-speed internet, but we're probably going to get that put in this week. Until then, I'm either doing minimal dial-up, or coming downtown to Los Gatos Coffee Roasting for my net fix (which is where I am now).

Ellie loves it here so much. There are two large fenced in yards, one with a grassy lawn, one with a hilly area for puppy to explore, and lots and lots of plants. But even better is Kevin's sister Susan's six-month-old goldendoodle puppy, Eddie, who has become Ellie's absolute best friend. The first day Eddie came over, they spent four solid hours tearing around the grassy lawn, diving in and out of the plastic pool, and generally having an incredibly good time. It did tire Ellie out, trying to keep up with a puppy, and she spent the next day basically asleep, but now she's feeling herself again, and is moping around the house, waiting for Eddie to come back and play with her some more. We've pretty much decided that if we do end up moving at some point for better schools for Kavi or some such, we need to get a place with a yard, and another dog who likes to play chase as much as Ellie does. We are slaves to our doggy, I know.

I miss my apartment in Chicago a bit, but I have to admit that my sadness is alleviated by the astonishingly perfect weather here. We're almost done unpacking, and this afternoon we took Kavi to court to meet Kev's dad's colleagues. (Kev's dad is a federal judge in San Jose.) Kavi has already been to church with Kev's mom to meet her friends there. It's a busy week for the baby. Once all the unpacking/laundry/etc. is done, I'm hoping to get started doing lots of writing. That's the plan for the next five months -- take care of the baby and write. Kev will start working again in a few days, preparing lectures for what should be a busy semester teaching at MSRI (math institute near Berkeley), so I get to be primary caregiver for the first time. We'll see whether Kavi actually lets me get any writing done. Having the grandparents around on the weekend should help!

Last night, Jed came over and had dinner with us (v. simple chicken vindaloo and rice), while showing off his spiffy iPhone. I was mightily tempted, but I think I am going to take up a friend on her offer of a free Treo instead. (Her office is upgrading.) Hard to resist a free phone, esp. since I did like the Treo to begin with. But if Apple drops the price on the iPhones for Christmas, I may give in to temptation. Kevin hasn't given me a birthday present yet, and if we wait and combine it with a Christmas present, that's not entirely unreasonable. Right? Right?

This weekend, we're going to leave Kavi with the grandparents and go to see Neil Gaiman's Stardust in the movie theatre. That's the place where they take a movie and put it up on a really big screen, I hear. It's been so long since I've been to one, that I've forgotten what it's like. :-)